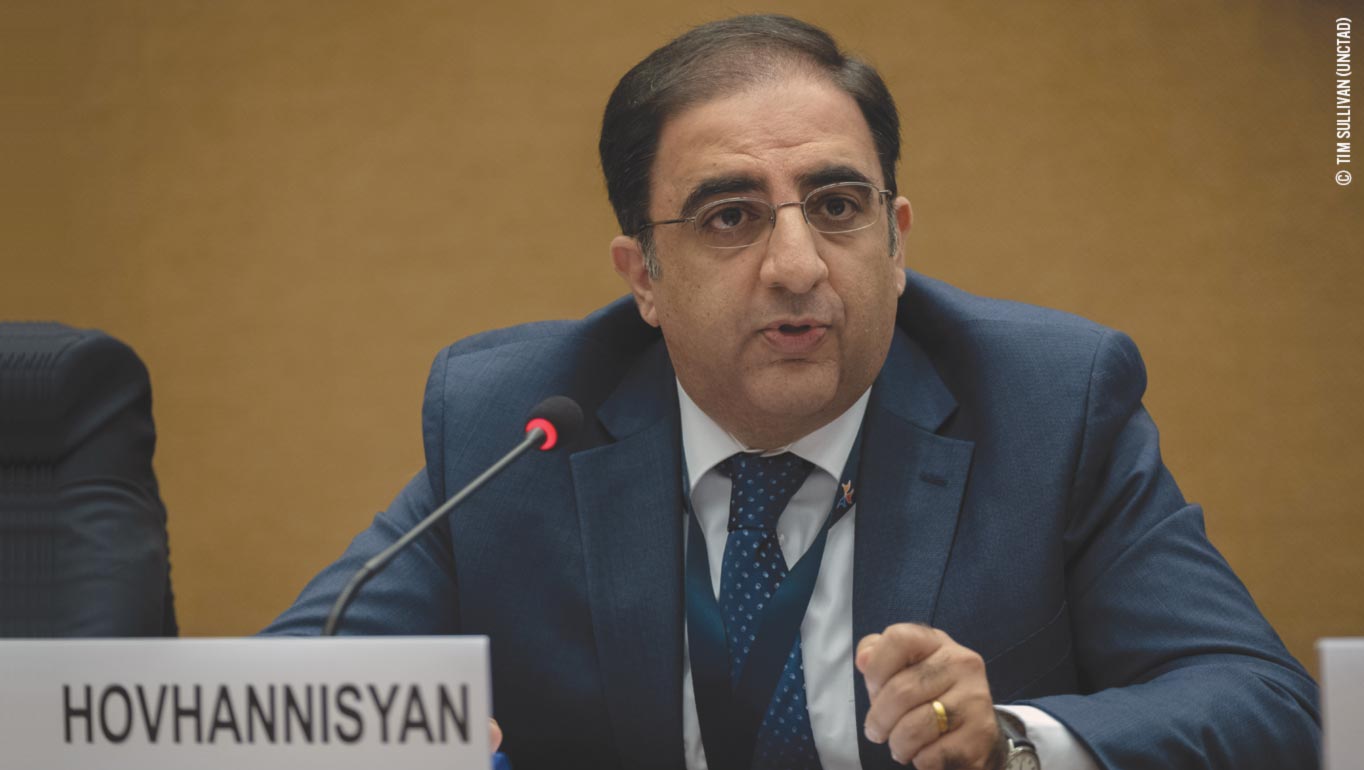 Who is Andranik Hovhannisyan?
We talk with the Permanent representative of Armenia on his career and his country’s 30 years of UN membership
By Astrid Couzian*
1 Apr 2022

Your Excellency, can you please tell us a bit more about yourself? Why did you decide to become a diplomat?

My decision was not a matter of choice, but of devotion and inspiration. In the mid-1990s, as I was learning Arabic at the Cairo University, the Embassy of Armenia to Egypt offered me an internship, during which I fell in love with diplomacy, a life-long endeavor.

Some compare diplomacy to jazz: endless variations on a theme. As a diplomat, you constantly meet new people, exchange with them on a broad range of issues, and most importantly contribute to peace: when diplomats talk, they silence the weapons. It is a huge honor for me to serve my country and represent it worldwide. Since joining the foreign service of my country, I have served in Damascus, Vienna, Washington and Geneva. It has been a fascinating journey!

History is another passion of mine. I come from a family of historians. I think that knowledge of history is a condition sine qua non to be a good diplomat. History helps us understand current realities and contributes to decision-making progress. It is certainly not a sole criterion, but an important one, as “all new news is old news happening to new people.”

You have been Permanent Representative of Armenia in Geneva since 2019. How would you assess your time in Geneva?

I would divide my time in Geneva into three periods: the pre-COVID one, the pandemic one, and the current one, which is not yet, unfortunately, a post-pandemic one. The craft of diplomacy is first and foremost about social interactions, and this is what I have missed the most since March 2020, but I am extremely pleased to see that it is progressively coming back. The way we did our work changed since we had to work remotely, but the work never stopped.

It is a great privilege and a unique professional opportunity to serve here. Geneva is one of the most important hubs of multilateral diplomacy, with a vibrant international community and over 40 international organizations dealing with a wide array of issues. In the pre-pandemic environment, Geneva used to host over 3,000 conferences annually. There is never a dull day!

What are the priorities of Armenia in the different organizations based in Geneva?

The three pillars of the United Nations – development, human rights, and security — are equally important to us. However, since Armenia has been a member of the UN Human Rights Council (HRC) for the last two years, we have focused on the protection and promotion of human rights. This year, I was elected as a member of the Bureau of the HRC. I am also one of its vice-presidents, which is a great honor for me.

Among a number of different initiatives that Armenia put forth in the HRC, I would like to mention the Resolution on Genocide Prevention that we authored and submitted for adoption on a biannual basis. As mentioned by UN Secretary-General António Guterres on the day of remembrance of victims of genocide, history tends to repeat itself; he urged people to remain vigilant and understand the early warning signs of genocide.

The list of our other priorities in Geneva-based organizations is too long to enumerate here, but I would like to mention our cooperation with UNCTAD on the investment policy review of Armenia, with the UNECE on the innovation agenda, and with WIPO on the national strategy for intellectual property.

Another set of priorities is related to the Nagorno-Karabakh conflict. We work closely with the ICRC for the Armenian prisoners of war, with the UNHCR for the return of displaced Armenians to their ancestral homes, and with the OHCHR on the protection of the human rights of the people of Nagorno-Karabakh and preservation of the cultural and religious heritage.

This year, Armenia celebrates the 30th anniversary of its membership to the UN. What is your assessment of these 30 years in the UN?

To become a fully-fledged member of the United Nations, to have a seat among the family of nations, I guess these are unique feelings for any state, but even more for a country that lost its independence 600 years ago and has, ever since, except for a short period in the beginning of the twentieth century, struggled to become a sovereign state.

The United Nations provides recognition of the sovereign equality of states. Armenia has come a long way for that. It is also a platform where states can cooperate on a wide array of issues based on sovereign equality. Again, when it comes to Armenia, we do not have that many international structures where we can express ourselves, make our voices heard, raise awareness and seek international assistance. Hence, being part of the United Nations is a great opportunity for Armenia, including in terms of capacity building and the technical assistance that UN country teams are championing.

On the other hand, Armenia also strives to contribute by being actively engaged in the different UN bodies and committees, chairing and working in various bureaus and boards, and participating in peacekeeping missions.

The Armenian diaspora is all over the world. What aspect of the culture is most relayed to the outside world?

The Armenian nation is in a unique situation: three million Armenians live in the Republic of Armenia and seven million are scattered around the globe. There are various types of communities: some are traditional historical ones and were created centuries ago, such as the one in Jerusalem; others were formed as a consequence of the Armenian Genocide. There are also so-called “new communities” created after the dissolution of the Soviet Union. But we all share the same values, traditions, and love for our homeland, and also the unique Armenian alphabet, created in the fifth century. Recently, Armenian calligraphy has been inscribed on the UNESCO Representative List of the Intangible Cultural Heritage of Humanity. There are Armenian schools everywhere from Los Angeles to Beirut, from Buenos Aires to Novosibirsk, where Armenian children study this same Armenian alphabet. It contributes to both the continuity of our historical and cultural memory, and to the preservation of identity.