By and for international civil servants, UN Today brings to staff, diplomats, and the wider international Geneva community an introspective analysis of what affects our life and work in Geneva and how to make the best of it. Housed at the Palais des Nations, the staff of the United Nations in Geneva has been serving multilateral diplomacy for almost a century, supporting more than 8,000 meetings every year, at one of the busiest conference centres in the world.

We are more than 9,500 staff and are the face of the biggest UN duty station outside of the United Nations headquarters in New York. We work everyday hand in hand with a large range of stakeholders to maintain international peace and security, to advance disarmament, to protect and promote human rights, to eradicate poverty, and to achieve the Sustainable Development Goals.

We welcome you to learn more about us! 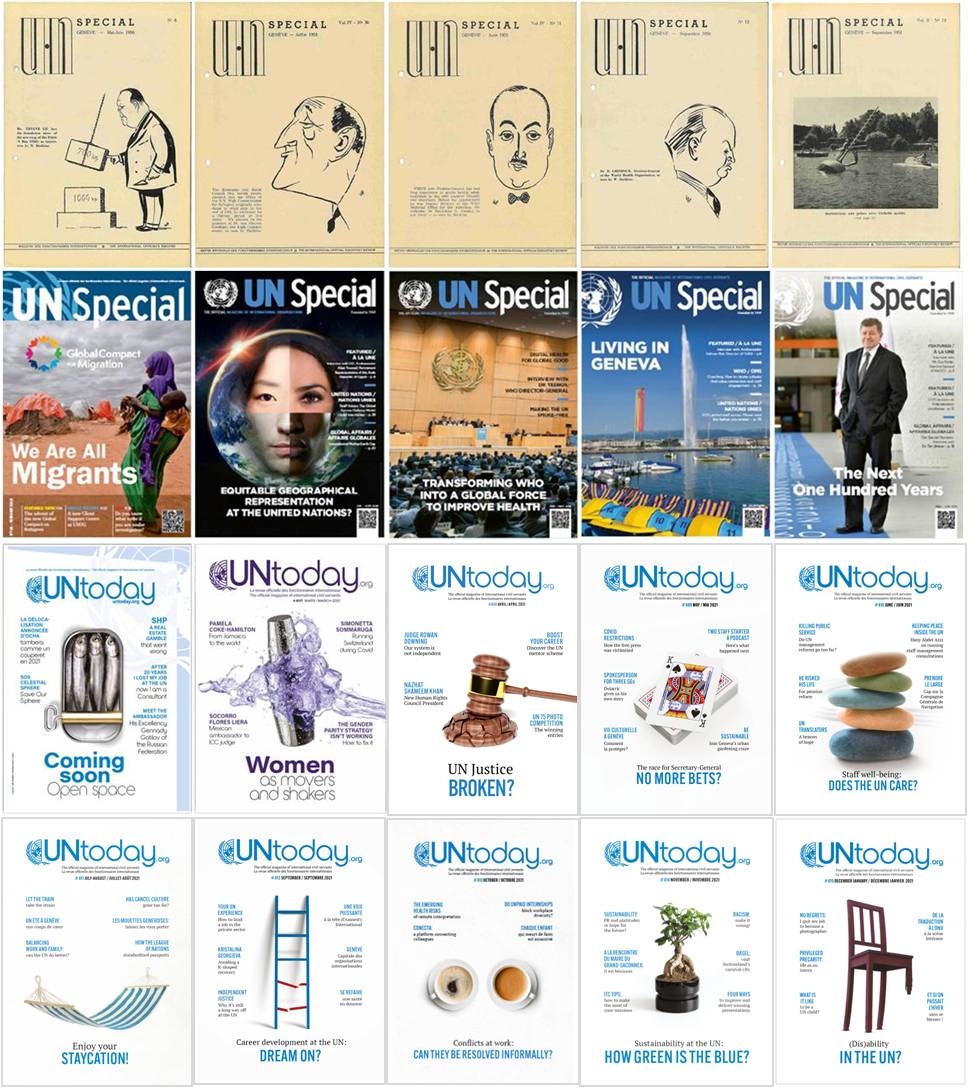 Over the years, UN Special developed to become a professional 50 page-magazine with an average of 32 articles, mainly in English and French (the six official UN languages are English, French, Russian, Spanish, Arabic and Chinese). Earlier, the content of the magazine tended to focus on UN staff issues, however, with its development and increase in outreach, the magazine covers a broad range of topics related to the work of international organizations and governance, such as peace-keeping, poverty reduction, human rights, climate change mitigation, environmental protection, natural disaster management and the status of the Millennium Development Goals (MDGs). The recent global discussions on greening the economy and enhancing sustainable development are reflected in the magazine due to the engagement within these topics of those contributing to the UN Special. Cultural and environmental world heritage sites (listed by UNESCO), find their coverage in the magazine as well.

In summer of 2015, UN Special submitted the nomination for the United Nations Secretary-General Awards (UNSG Awards) that honour individual staff members or teams who promote innovation, efficiency and excellence in the way the Organization delivers its programmes and services. On the eve of the 70th anniversary of the United Nations, UN Special was announced shortlisted in the category: Staff Volunteerism, for the collective work of the colleagues who promoted Organizational values through the commitment of personal time and/or expertise to a deserving cause outside their job description.

As of 2020 UN Special entered a new era under the name UN Today.

Take a look at the previous editions.