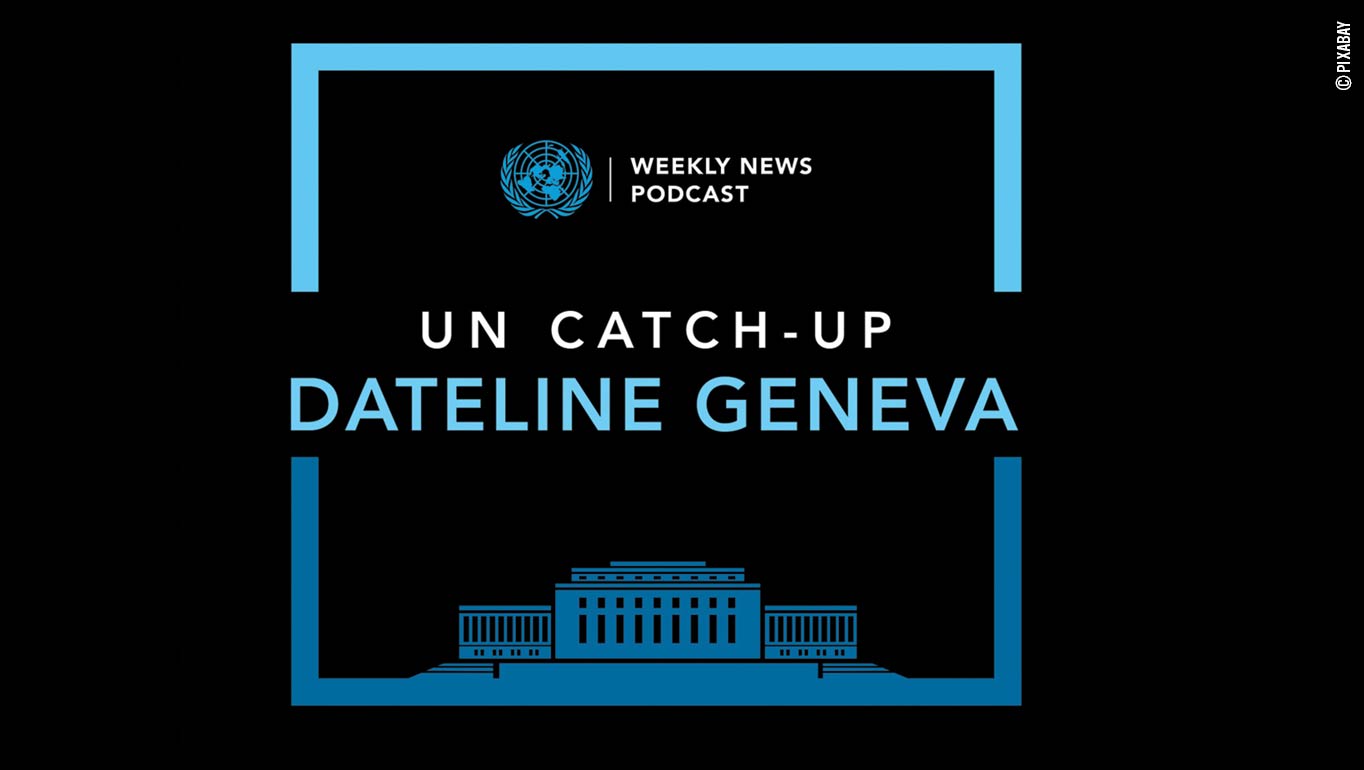 Two colleagues and their podcast
Behind the success of UN Catch-Up Dateline Geneva, which just recently reached its 50th edition
By Maritza Ascencios*
2 Mar 2022

Daniel Johnson and Solange Behoteguy-Cortes, Producer and Commentator of the United Nations Information Service in Geneva, are the team behind a successful series that has now reached its 50th podcast.

How did you come up with the concept for this podcast?

Daniel: Well, I’ve always been a fan of radio and podcasts. As part of UN News from Geneva, I provide written and daily audio content to New York on all subjects, conferences, and news events that happen in Geneva. A few years ago, while covering Syria talks, we did a survey on who was listening and saw that our material could be used by media that can’t afford to send someone to Geneva for a single conference. I’d been trying to do a podcast that added to the idea of engaging more listeners. By late 2020, luckily, I’d met Solange. We had put out some stories on UN News together and she’d already told me about some amazing stories from Bolivia, her home. She was so enthusiastic, I knew her passion could drive this forward. You can’t do these things on your own, it’s a big undertaking. So, I called her up on my way home in the car late one night, just thinking “we’ve got to get it going”, and I asked her if she was up for it.

From the outset, the podcast opened with headline news, then an in-depth interview and closing commentary. What goes into preparing your podcast?

Daniel: Importantly, we don’t start from scratch, especially for the headlines. My daily UN News audio bulletins cover UN-focused work and have audio content from the agency spokespeople that provide regular briefings at the Palais des Nations. With so many press conferences, we have strong testimonies from spokespeople who have been in the field or have colleagues who’ve just returned from the field, from the UN refugee agency, the World Health Organization and others. They know the Geneva press corps and how to talk to the media. I can take their audio to spice up the podcast and give it a sense of authenticity.

There are so many UN agencies in Geneva and very good spokespeople who know how to tell a story. The interview topic is often something we’re covering at UN News, from the Ethiopia situation, Yemen, the crisis in Afghanistan, to the Sahel and the links to the climate crisis and, of course, COVID-19, all mainstream topics. Or more specialized, like global supply chains and transport which might not catch people’s attention, until you get a cargo ship wedged in the Suez Canal that’s contributing to a world-wide crisis for online purchases. Luckily, we have UNCTAD experts to interview, as we did on the Ever Given supertanker, and they can explain why it’s important and how the UN is trying to recommend solutions.

After the news angle, Solange provides a point of view, with an original interpretation of the interview to tie in poems and authors with the work of humanitarians and others. Her imagination is limitless!

Solange: It’s a very good, human experience, and we also have fun. Sometimes my inspiration comes from a quote the interview, other times from the subject itself. For instance, talking about refugees, I went straight to Eduardo Galeano’s poem, The Nobodies. Besides my literature background, I do research, of course, such as for Daniel’s interview on Little Amal**. I came across a theatre piece, The Jungle, on the refugee camp in Calais. The research is fascinating, because I also learn. There’s so much material! We try to link humanitarian issues with literature and go a bit beyond, to bring more of a human touch.

Daniel: The human story is what matters most. And, trying to show how the UN is helping, how the Sustainable Development Goals help people in a practical way, what the Human Rights Council’s recommendations are… Under-Secretary-General for Global Communications, Melissa Fleming, says, “statistics are human beings with the tears dried off.”

Any interview or commentary that stand out for you?

Solange: That’s difficult, because they are so different, even when we repeat topics. I like introducing Frankenstein because I love Mary Shelley! When we discussed refugees and that they deserved COVID vaccines, I talked about the Frankenstein monster as an incarnation of prejudices, beliefs, myths, and fears that persist to today about new technologies and science, especially those concerning life. People fear they may create a new monster, and antivaxxers have existed since the first vaccine was created for smallpox.

I was worried about the connection, the sound levels, and that the signal wouldn’t break. He played his guitar for us. His A Song for the Sahel is for a campaign for the UN Office for the Coordination of Humanitarian Affairs, to raise awareness about the millions of people affected by insecurity, extremism and climate change. His message appealed directly to youth, not to take money, not to take up weapons, there was another way. Hearing this from him has so much more power than coming sometimes from the UN.

Solange: I would add that for his interview, I didn’t need to find a poem. The words were already there, in his lyrics, because he’s also a poet.

What goes into putting it all together, the production and sending it out?

Daniel: Everything starts on the previous Friday, as I try lining up an interview for the Monday. Then I talk to Inés Alfaro (our intern until 17 December), who keeps us on track with planning and supports dissemination. We’ll do some research on the topic and on the speakers, to get a sense of how well they speak. On Monday, I do the interview at midday and send the raw audio to Solange, so she can get a head start. On Tuesday, I edit that audio and, on Wednesday, we record the wrap with Solange at 11 a.m. In between, Solange and I exchange ideas on the wrap, then I do the outro – the signing off for the podcast. After that I edit the interview down to 8–9 minutes, and add the news on Thursday, to get the very latest. Then I add the music bed and patch it to New York in the evening. I can’t get this out of my head, (hums) “Do do do do do do, do do do do do do.”

Solange: You have to write that!

Daniel: On the UN News platform alone, by December 2021, the episodes of the UN Catch-Up Dateline Geneva podcast had more than 600,000 plays. UN News use distribution network, everything from national radio stations, to universities and individuals. We’re also on Apple Podcasts, Google Play, SoundCloud and the European Broadcasting Union audio exchange, and on social media posts with promotional videos and gifs created by Inés. Specialist platforms, like Relief Web and Protection Web, thank us for the podcast which often covers topics they promote.

Daniel: In January 2021, Solange introduced us to the longest Aymara word, at 36 letters and 24 syllables: Aruskipt’asipxañanakasakipunirakispawa. I loved hearing this, it means: “We are compelled to communicate.” That’s what we are trying to do, explain the positive work of the UN and the human stories behind this.

** A giant puppet of a refugee girl.

* Maritza Ascencios is an editor at UNCTAD. She has worked in communications and advocacy at UNICEF and UNDP.
Read more articles about INSIDE VIEW