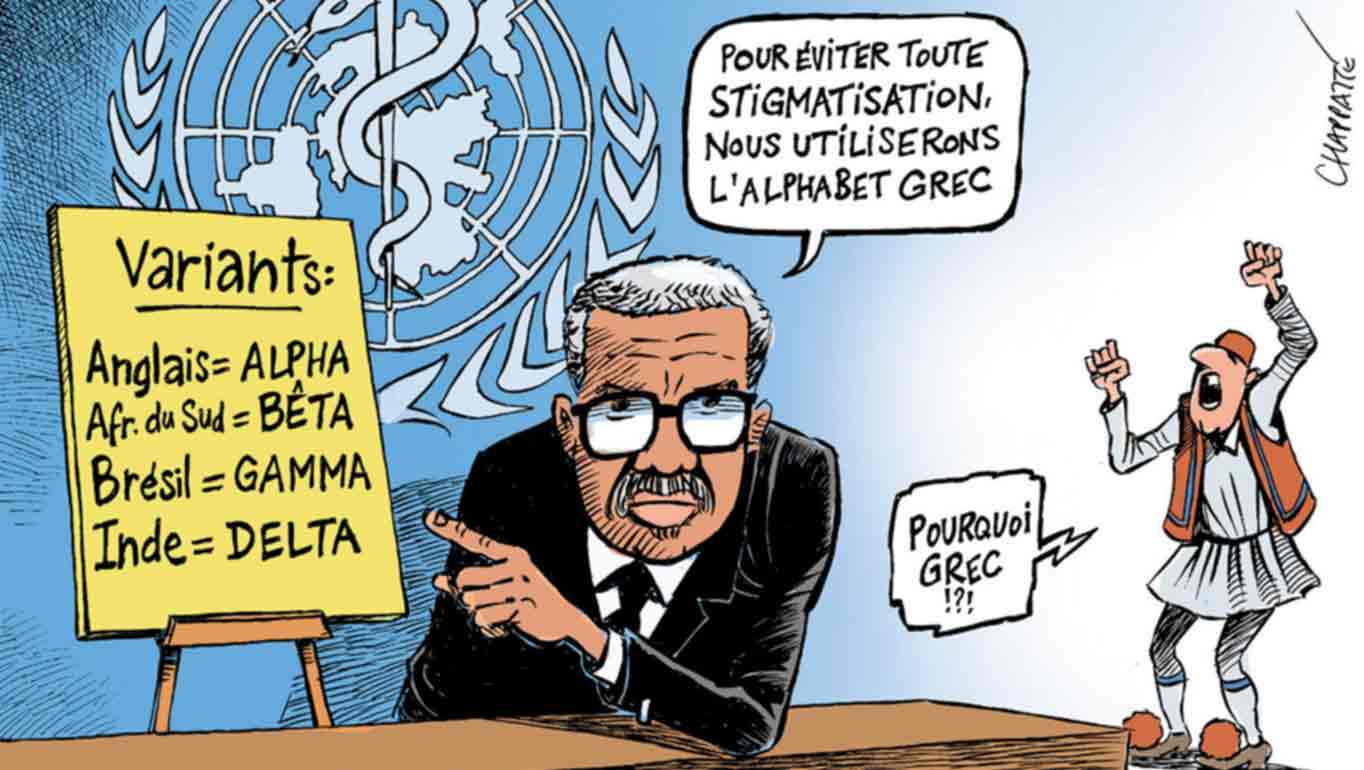 Patrick Chappatte was born in Pakistan, he spent time in Singapore before his family settled in Geneva when he was five. He publishes in Le Temps, NZZ, Le Canard Enchainé, Der Spiegel and the Boston Globe. Until recently he also worked for the New York Times, but we’ll get to that later.

Patrick, how did you get into political cartoons?

It’s not a career you usually plan on. There aren’t many slots available. It was a mix of chance and circumstances. It required interest in current affairs and drawing. My father subscribed to Newsweek and I really wanted to impress him. So I subscribed to a publication which had a compilation of the best political cartoons. And in the end I got my own comic strip in Newsweek.

How does a political cartoonist fit into the newsroom?

I talk with the newsroom on the topic. Then I do different sketches, which I send to a panel of journalists including the editor-in-chief. I ask them to vote. It helps me choose. And if one doesn’t work and no-one chooses it, well it doesn’t work. A cartoon doesn’t have to represent the editorial line of a newspaper, it can be useful to have a counterpoint.

How do you make the perfect cartoon that encapsulates everything in one picture?

There is a lot of trial and error and a lot that goes in the bin of history. Curiously, it’s not always on the topic that I am the best informed that I do the best cartoons, because then I tend to do too much explaining. Intuition is the best approach. A good cartoon must be light in form and heavy in the content.

Are any issues taboo for political cartoonists?

We all have our society taboos. Some are widely recognized like the holocaust. And we have our personal taboos. Humour is always cultural. That is why some cartoons lead to big misunderstandings because they are seen by people who can’t understand them.

How do you balance free speech with respect for people’s religions? You’ll recall what happened with Charlie Hebdo.

We need to look at the context. France adamantly defends its laicité (secularism) and there, people are allowed to be blasphemous. Note that attacking religion is not the same as attacking the believer. Laicité was originally aimed at the Catholic church. Charlie Hebdo was born from the May ‘68 riots and targeted the clergy. It was blasphemous but from a political perspective. Some say that Charlie Hebdo is now part of the elite with no regard for oppressed minorities. But again, Charlie Hebdo is targeting the institution, not the believer. And the problems of banlieues (French immigrant suburbs) and poor social integration are a different issue. Killing people because they draw cartoons is impossible to justify. It crosses every boundary. It’s violence.

So has cancel culture gone too far?

Social warriors, mostly from the young generation, are fighting for good issues such as equality and rights for minorities. They are using the power of the internet and social media, which is fine. But they don’t just want the perceived offense to be recognized, they want to be vindicated, they want the offender to shut up and any media that published “offensive” content to apologize. They have been successful in many instances because the traditional media is intimidated and tend to panic. These days it’s too easy to stay at the surface, get fired up and resort to aggressivity. It feels like the binarity of social media has infused our social interactions and our debates. Things are either good or bad and you make up your mind in a snap. Activists start by exposing the supposed offensive character of an image, or a text. The campaign builds up on social media. People can join the moral crusade with a simple click, which gives them instant satisfaction.

We should be digging deeper and asking what does the image or text exactly say, what is the intent of the author? Especially when it comes to satire. Humour is rich and ambiguous. It’s healthy and is supposed to put you off-balance.

Once you slap a label on something or someone or a cartoon, such as racist or transphobic, that label is absolute. There is no half-racist. You’re leaving no room for mistakes or jokes that are not as good as they could be. It’s all about la faute – guilt, which you cannot be absolved from.

In 2019, the New York Times stopped publishing cartoons following an uproar over the work of Portuguese cartoonist Antonio Moreira. Were you disappointed? Has the US media become too self-censoring?

It sent a terrible message across a world in which people look to the New York Times as a model of courage. A colleague in Nicaragua told me editors there could be encouraged to get rid of cartoons as a result. I spent 20 years doing cartoons for the International Herald Tribune, which was taken over by the New York Times. During that time no-one complained. Then this happened. You would think the New York Times would be well-equipped to withstand an attack, yet they caved in. It was preventive self-censorship and I was saddened by how they dealt with it. The mistake news editors make is to think that Twitter is their audience.

Do you think the UN is doing enough to protect freedom of expression?

The UN is an important place to have such conversations. When she was president of Switzerland, Simonetta Sommaruga organized a panel in Geneva around this very issue. But the UN is also a very polarized place with entrenched positions. On the issues of freedom of expression vs respect for religions, there have been profound disagreements between member states for years.

* Ian Richards is an Economist at UNCTAD and a UNOG staff representative.
Read more articles about CULTURE