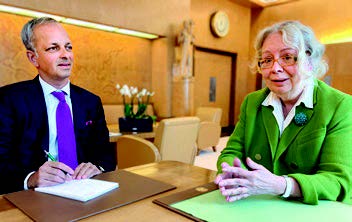 What drives UNOG’s new DG UN Special speaks to the new UNOG Director-General on the people that inspired her, her role in the transformation of the Soviet Union, and the future of multilateralism in Geneva. I walked into the Director-General’s office. Unlike a previous visit and of what I had heard from many colleagues, the […]

UN Special speaks to the new UNOG Director-General on the people that inspired her, her role in the transformation of the Soviet Union, and the future of multilateralism in Geneva.

I walked into the Director-General’s office. Unlike a previous visit and of what I had heard from many colleagues, the air-conditioning was off. “I had to turn it off, she replied. People were complaining. For me, the colder the better.” This might seem normal for someone who grew up and spent much of her life in Moscow, even if her years in Brussels, of which more later, were to shape her life path.

Tatiana Valovaya spent her childhood in the Soviet capital where both parents worked late every day. Something she thought normal until she and her sister went to play with the kids next door. Her mother was a professor of economics, her father the deputy editor of Pravda, at the time “publishing revolutionary articles that could have cost him his career,” while also writing books on history.

When it came to university, she first wanted to be a chemist, but then decided to follow in her parents’ footsteps and study microeconomics and finance. She chose the department of international economic relations, a faculty in which she was one of three girls in 30 students. Following undergraduate studies, she progressed to a PhD in which she focused on the European monetary system, and published a book predicting “another wave of monetary integration in Europe”. Describing herself as a “big supporter of European integration,” those views went against prevailing Soviet orthodoxy at the time but set the scene for much of her career.

A regular op-ed contributor, she decided to pursue a media career full time, landing a job in 1984 at The Economic Gazette, a weekly that she described as being a cross between of The Economist and Financial Times. One year later, perestroika was set in motion. It was an exciting time to be writing. “We were publishing revolutionary articles. We could publish almost anything.”

And the magazine, she believes, was having an influence on the country’s direction. Colleagues left for jobs in government, and soon she was tapped by a contributor who had just been appointed Soviet ambassador to the then European Community. Would he join her in Brussels?

Yes, she replied. And after an interview at the foreign ministry, found herself in charge of economic and monetary integration matters, as well as press attaché; there were only four staff. Once again Valovaya was a woman in a minority, one of the first female diplomats in the Soviet foreign service. But she didn’t have time to be fazed. Things were moving fast, both at home and in Brussels. That period saw European monetary union, the energy charter, and in 1994, the Treaty of Maastricht.

Yet it also held bitter-sweet memories. “It was while at the Maastricht talks, at the same time the European Union was created, that I found out about the break-up of the Soviet Union.”

Now a member of the Russian mission she nevertheless worked closely with her counterparts from the newly independent countries, encouraged by an EU that favoured a similar regional community to its East. This was to become the Commonwealth of Independent States.

Looking back over that period I asked Valovaya if the reforms her home country went through could have been done differently.

No, she replied, “they were the only possible way to do them. They were difficult times, but everyone felt the benefits, which were not just economic. You could write what you want, read what you want and travel abroad.”

Valovaya eventually left Brussels, and after a writing a doctoral thesis, and then a book on the lessons the CIS could learn from European economic and monetary integration, was asked by the Russian president to work on Eurasian integration.

What started as a fledgling Eurasian Economic Community in 2000, led to a union in 2015, with, mirroring the EU, a commission to run it. She was duly made a commissioner with responsibility for economic integration and new members. Having been there from the start, she remains proud of what the union has achieved. A single market in goods and services for one. But it also meant, for example, that Kyrgyz workers could now work legally in Russia, unlike before, “with full rights. They were not afraid of the authorities anymore.”

It was while there that she started working more closely with the UN, taking part in meetings in New York and Geneva, cooperating with UNCTAD and developing reports on the sustainable development goals.

And what does she make of her new job, running the UN office in Geneva, at a time when Geneva’s role as a host city is being called into question? “I don’t think Geneva is under threat. It is unique in the quality and expertise it can provide. There are lots of NGOs and research institutions. We need to use international Geneva much more. But we have to be more competitive and provide better services.” And the threat to multilateralism?

“Multilateralism is not disappearing! There is more demand for it than ever. We now see companies bigger than small member states and operating outside national systems. We are seeing a change in the social and economic order that happens every 200 years. We need rules.”

“But we need to find forms of multilateralism acceptable to all member states. Climate change is a good example: those most affected are least to blame.”

With one of her largest portfolios being the 850 million dollar renovation and construction works for the Palais, I asked how she would ensure proper management of the project. “I am dealing with decisions that have already been taken. I have inherited a half-year delay. It is important that we finish within budget and on time. We need transparent discussions.”

Before closing, I asked her how she intends to deal with reports of harassment at the office, given that Secretary-General Antonio Guterres had made it one of his priorities. “Staff should know that they can be absolutely secure,” she replied, “and I will continue with zero tolerance.”

“I will be tough on this matter.”