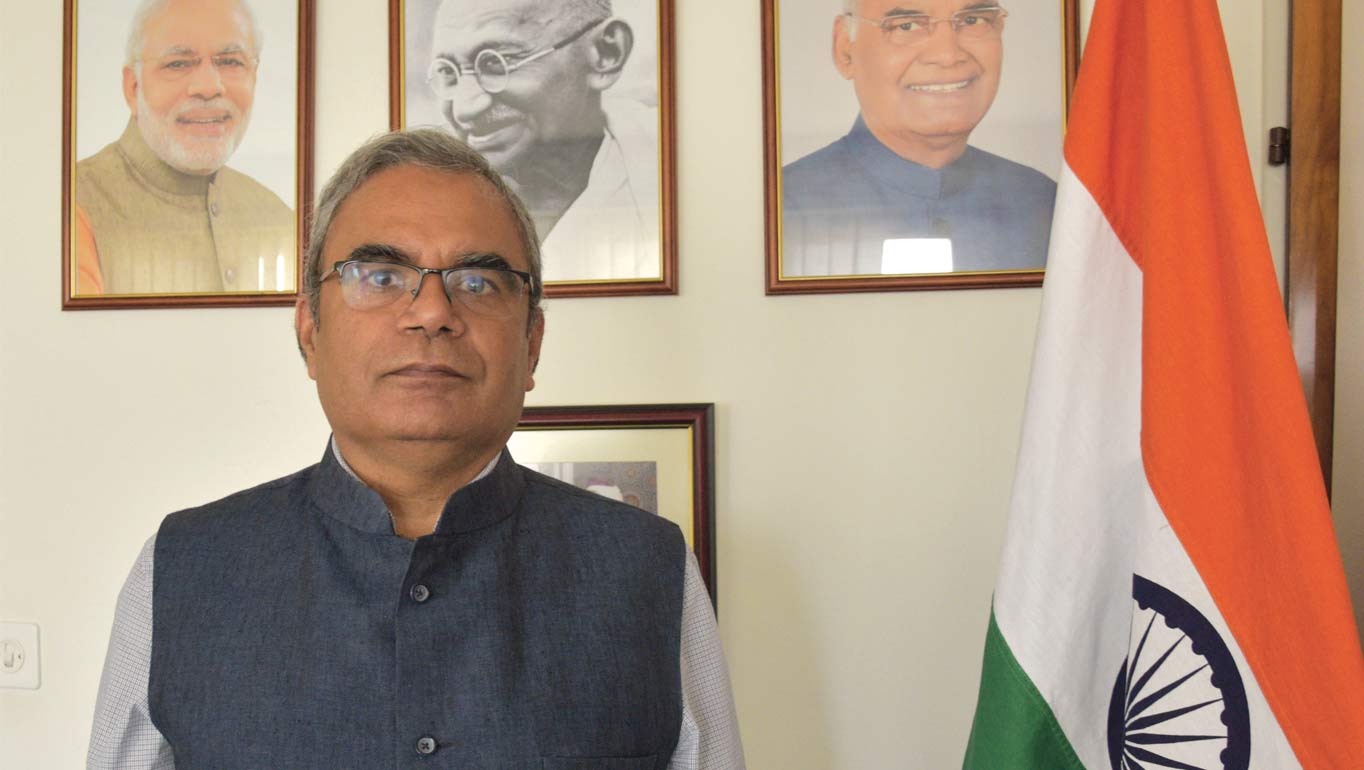 India – Peace, multilateralism, and inclusive development
We converse with Ambassador Indra Mani Pandey on India's diplomacy and priorities at the UN and other international organizations in Geneva
By Vedant Kulkarni*
1 Oct 2022

Excellency, could you please share with us briefly a few words about your career and how it has shaped your life?

I joined the Indian Foreign Service in 1990 and have served as Consul General of India in Guangzhou, China; Deputy Ambassador of India to France; Ambassador of India to the Sultanate of Oman and as the head of Disarmament and International Security Affairs Division (MEA India). Following that I have been serving as the Ambassador and Permanent Representative of India to the UN and other international organizations in Geneva since September of 2020. My diverse experience in dealing with bilateral relationships and multilateral diplomacy has shaped my evolution as a diplomat. These varied experiences have exposed me to many different civilizations which has enforced my belief in the ‘unity in diversity of the humanity’.

What are the priorities of India in the different international organizations based in Geneva for 2022?

As a member of the UN Human Rights Council, we have accorded equal priority to all fundamental human rights and attached the utmost of importance to the Universal Periodic Review. This will enable constructive engagement among the member states towards the global promotion and protection of human rights. We are advocates for a non-intrusive, collaborative and consultative approach to dealing with human rights issues. In regards to the UN and other international organizations in Geneva, we have accorded high priority to the specific areas of health, labor, telecommunications, intellectual property, trade, sustainable development, refugees and migration along with several others. This is in line with India’s commitment to the welfare of the entirety of humanity and within the framework of India’s development partnerships with developing countries.

Mahatma Gandhi’s birthday is a day of national celebration in India and has led to the creation of an International Day of Non-Violence by the United Nations. What impacts does this have on the people of India across the year?

Gandhi reflected and epitomized in himself India’s civilizational ethos and wisdom. Naturally, his ideals and values have found abiding resonance within the people of India. The Government has remained steadfast in its commitment to Gandhi’s philosophy of non-violence and peace, which is reflected in both our domestic and foreign policies. India has worked for international peace, security and the welfare of all humankind. The impact left by Gandhi on people’s participation in governance has inspired India’s democracy at its grass roots and has led to the evolution of our inclusive and participatory democracy. For instance, Gandhi’s ideas on the environment and sustainable development have inspired our goals and strategies. Gandhi paid particular attention to holistic health and sanitation, which has inspired our very own ‘Clean India’ campaign, known as Swachh Bharat Abhiyan. Gandhi was also an avid advocate of women’s rights and sought to draw women out of their homes and encourage them to actively participate in mainstream life. In order to follow this vision our Government has started the ‘Beti Bachao, Beti Padhao’ campaign which translates as ‘ Save the Girl, Educate the Girl,’ which has been successful in addressing gender discrimination within our society. Women have also been the primary beneficiaries of many other government schemes.

India’s diaspora is the largest in the world. What socio-cultural values do you now see or want to see adding to the world?

We regard India’s 30 million-strong diaspora, including non-resident Indians and people of Indian origin, spread across more than 100 countries, as our extended family. The Indian diaspora has shown the world many of the strengths of Indian culture and values, such as yoga, Indian cuisine, music and dance. Today, several members of the Indian diaspora hold the highest leadership positions in politics, economy, industry, technology education, the arts and culture in many of the countries that they reside. The government has been engaged closely with the Indian diaspora to facilitate its links and connections with India and to continue to enable them to contribute effectively to India’s development.

2022 marks 77 years of India’s membership in the UN. What is India’s vision for future multilateral cooperation in the coming years?

India has been steadfast in its commitment to multilateralism since our independence. Our world-view is anchored in India’s civilizational ethos of Vasudhaiva-Kutumbkam (The World as One Family) and Sarvodaya (The Welfare of All Humanity). We share the desire of the international community for the UN to play a more effective role and as such we have called for a reforming of multilateralism, including that of the UN and other international organizations in order for them to accurately reflect the contemporary world and enable them to deal appropriately with its current challenges. As a founding member of the UN, India firmly remains committed to multilateral diplomacy in its approach to deal with major challenges to international peace and security, along with sustainable and inclusive development and the global promotion and protection of fundamental human rights.