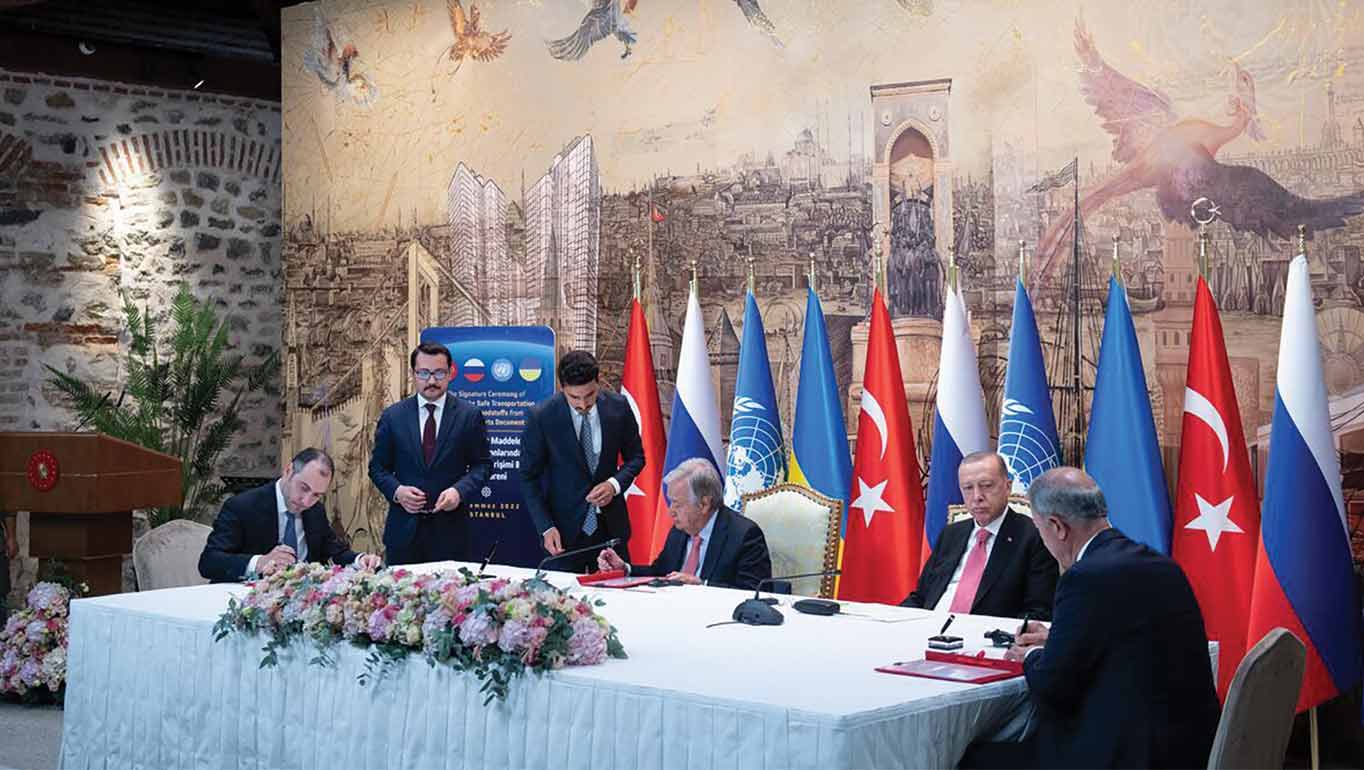 The second of two articles. When war broke out between the Russian Federation and Ukraine, both among the most important producers of agricultural commodities in the world, UNCTAD chief Rebeca Grynspan was asked to calculate the impact and then negotiate, together with WFP, to find a deal between the two countries so that food shipments could continue.

Secretary-General Guterres called the Black Sea grain deal a beacon of hope and an agreement for the world. Given how many theaters the UN is involved in, that’s quite a statement. What are your thoughts?

Secretary-General Guterres is aware of the challenges and threats of these cascading crises for the most vulnerable people and the most vulnerable countries and that if the crisis is not handled properly the world will become much more unequal and suffering can rise to unseen levels due, for example, to food insecurity. Yet if multilateralism can cushion the blow of these multiple crises on developing countries, it can emerge strengthened.

How did you, Martin Griffiths, and the staff in the team pull these negotiations off? They must have been tense.

The SG put together two teams, one lead by Martin Griffiths and one by me. The communication between Martin and myself was always very good and we had a shared view of what we needed to achieve. We each put together our teams, which were very independent from each other, but coordinated by the SG. We understood that this was a package deal.

We were a very small team, of three women and two men, but could rely on UNCTAD for much of the curated information needed – the information, research and analysis necessary to be fully prepared for the discussions – and UNCTAD was able to deliver.

I have to say that we always had the permanent involvement of the Secretary-General. Every time we needed to unlock something, to push for something, for something to happen – he was there.

The deal built on a number of reports from the UN Global Crisis Response Group, which all gained substantial media exposure. What skills, expertise and agencies did you bring into the team from around the system, and how did you get them to work together? The UN common system normally prefers to work within silos. And development and humanitarian affairs usually stay well apart.

The Global Crisis Response Group contributed evidence, information, analysis, and a narrative that raised global awareness on what we were facing. Before, there really was no widespread understanding of the very complex context we were in. We said 1.7 billion people were at risk of suffering the greatest cost of living crisis in a generation.

This was a perfect example of the humanitarian and the development perspectives being two sides of the same coin. If we were to focus only on the humanitarian aspect of the crisis, it would be impossible at a later stage to tackle a crisis on this global scale.

UNCTAD staff rose to the challenge as well, working with the whole system, with many partner organizations (UNEP, FAO, WFP, Regional commissions), listening and learning from each other.

How was the work turned around so quickly? Un reports often seem to be chasing the issue rather than running with the issue.

Maybe we were in one of these strange moments in life when things come together – all the pieces were in the right place at the right moment. We all took risks. We didn’t know if it would be successful, but a conservative attitude would have failed.

Personally, for me, my own experience was a very important driver. I experienced first-hand being in the government in Costa Rica during the crisis of the eighties in Latin America, and understood full well the lasting scars it left. In a well-functioning country on a strong development path, poverty went up and education was set back two decades. I knew that if the multilateral system had acted earlier and more decisively, much of the suffering could have been avoided.

This was a much-needed shot in the arm for the UN. Do you think there are other pressing topics that would benefit from this approach?

We are more than the sum of our parts. The UN has the expertise and legitimacy to do more, and we must learn how to harness the UN’s extraordinary capacity and willingness of people to commit, and their belief that the UN has a purpose, while being careful not to try to solve everything in the same way or to impose super structures every time.

What lessons do you think this can have for how the UN operates, and particularly UNCTAD, the organization you lead?

UNCTAD has exceeded my expectations. This is an organization that can rise to the challenge if given the opportunity and if leadership understands how much it can contribute.

Secondly, I learned the importance of maintaining member states close by. The lesson is to take countries seriously, talk to them, bring them close to the organization.

And finally, the United Nations has the people, the knowledge, the capacities, and the legitimacy to fight for multilateralism and to bring it to its best – even in the most challenging circumstances.