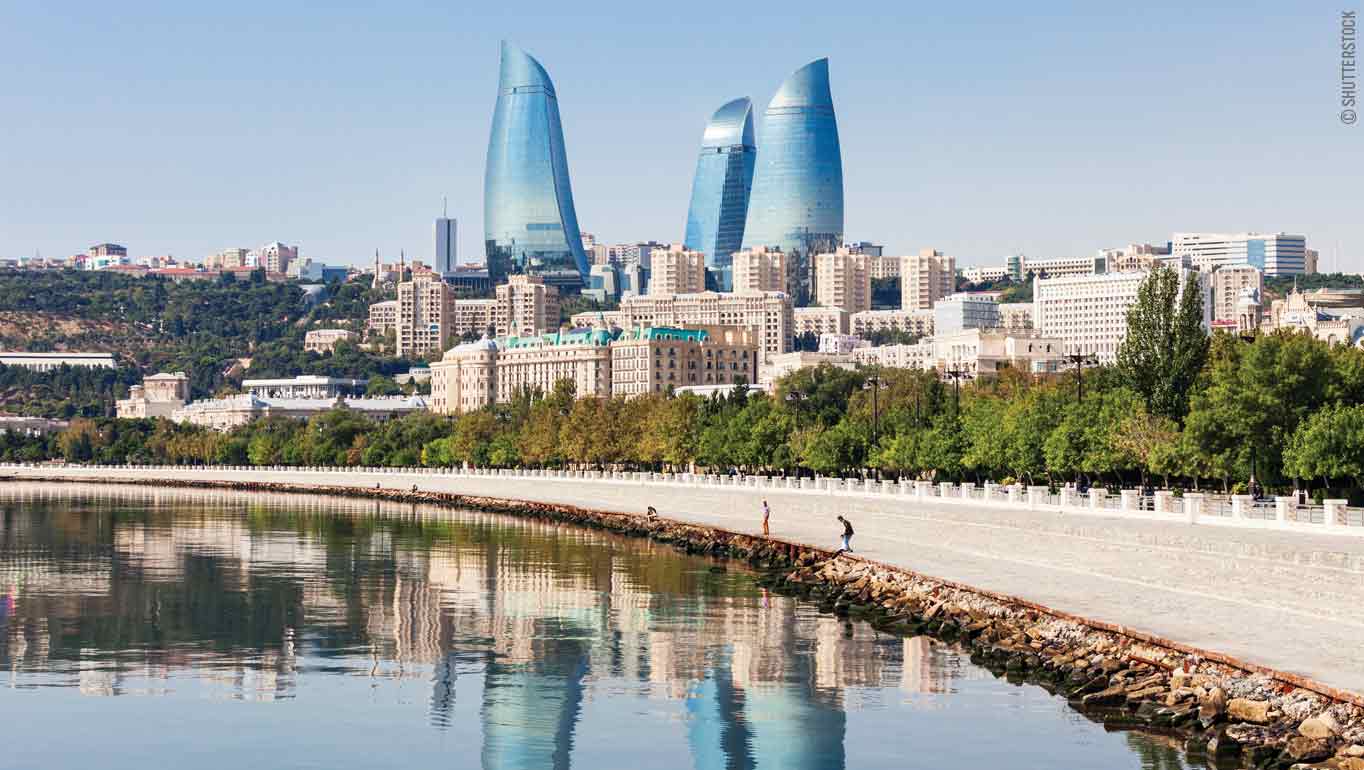 Azerbaijan, a country of fusion
Let’s go to one of the most talked about travel destinations in the world
By Fariza Ahmadova*
1 Jun 2022

The French have a phrase to describe something that is exceptionally beautiful: “À couper le souffle !” This is one way to describe Azerbaijan!

A gem of the Caspian Sea, this is now a popular travel destination that offers futuristic marvels alongside historic charms, a bucket list destination for true discovery. You may have heard of the capital Baku, from James Bond in “The World Is Not Enough,” which depicted the Azerbaijani oil fields. Known for being one of the world’s oldest oil producers and for hosting Formula 1, Azerbaijan has so much more to offer.

Baku is a city with European standards, tradition, and a true soul. Walking through the streets, you can see a 12th century mosque and a Rolls Royce showroom nearby. That’s the kind of fusion Baku is all about.

Azerbaijan was the first majority muslim country to grant women’s rights, long before most European countries. The Nobel Family, who founded the Nobel Prize, made their money in oil here. Another fun fact? The word ‘Caucasian’ originated from the Albanian Caucasians who inhabited Azerbaijan centuries ago. Influenced by Ottoman and later by Soviet culture, the multiculturalism is evident at first sight. People are welcoming to visitors, and Eastern hospitality mixed with an appreciation of Russian literature is what enchants tourists in this magical city.

From ultramodern sky-high glass buildings such as Flame Towers, to the ancient towers in the old town, Baku has it all. The baroque buildings dating back to the nineteenth century, are an absolute contrast to the modern skyscrapers, bringing the old and new together.

Probably the best rice you will eat, ‘Shah-Ash’ is cooked in oil and saffron, while Dushbere is a must-try for anyone who enjoys a home-made dumpling soup with spices and herbs. Khingal is an absolute culinary treasure and is believed to be the first pasta-like dish in the Caucasus. If you are looking for a light, plant-based dinner, Mangal Salati — the grilled eggplant salad — is the perfect choice. Dovga, a rich yoghurt soup, is also a refreshing and vegetarian choice. Be sure to try the legendary pomegranates for dessert.

The Maiden Tower offers visitors a chance to climb up its stairs, right to the very top of the monument, to see the best view of the Caspian Sea, the Boulevard promenade and the old city fortress walls. Dating back to the 12th century, the town is on the UNESCO World Heritage List.

The Palace of the Shirvanshahs, another UNESCO-listed sight, is perfect for a warm afternoon viewing to jump back in time to the Shirvanshah Dynasty.

The Heydar Aliyev Center, designed by the incomparable Zaha Hadid, is a cultural point of attraction for both tourists and locals. It offers numerous galleries, a museum, and an auditorium.

Bibi Heybat Mosque, located just outside of the city center, is an architectural pearl, where you can see the tombs of the descendants of the Prophet Muhammad.

Gobustan and The Mud Volcanoes are a great way to take a break from the city life and disconnect in nature. Witness some of the first prehistoric rock engravings from the eighth millennium BC, on the Gobustan walls, and put your hands into mud volcanoes for a remarkable memory.

Yanar Dag, a UNESCO-listed fire temple, will set the record straight as to why Azerbaijan is called the ‘Land of Fire.’ This seventeenth century temple and hill has been burning for four millennia now, with no clear reason.

Looking for some magic? You’ve got it. The Carpet Museum, found on Baku’s main boulevard, is home to over 6,000 Azerbaijani carpets, one of the traditional crafts of the country. Learn about the history of carpet weaving and contrast the different regional designs.

The Museum of Modern Art annually hosts various temporary exhibitions by world renowned artists from Picasso to Dali. The museum holds the best works of Azerbaijani artists from avant-garde styles of Faig Ahmed, to classical ones such as Tahir Salahov.

Yashil Bazaar, a huge market for fresh fruit, colorful spices and aromatic teas, is a perfect way to get to know not only the tradition of Azerbaijani food but also the hospitality of the people. The vendors are extremely generous and will offer visitors anything they like to try.

Villa Petrolia, founded by the Nobel Brothers in 1882, houses the Baku Nobel Oil Club. It is also a museum exhibiting the possessions of the Nobel Family.

For the more active visitor, Shahdag Ski Resort is a popular skiing destination just a short ride away from Baku center. Try skiing in the iconic Caucasus Mountains, then discover the lavish treatment on offer off-piste afterwards.

Meysari Winery produces organic wines from local grapes, so if you want to raise a glass of wine in Azerbaijan, this is the place to do it. Indulge in the local cuisine while being guided by the wine connoisseurs to choose the perfect complement for the meal. You will also have a chance to walk through the beautiful vineyards and learn about the process of wine production.

There are numerous luxurious five-star hotels such as The Four Seasons Hotel Baku, The Fairmont Baku, and the JW Marriott Absheron Baku Hotel.

Traveling on a budget? Old City Hotel as well as Hotel Theatrum are fair options, while Sahil Hostel is a popular choice with great service. All of these are central and within walking distance from the main attractions.

While one of the most economically developed cities in the Caucasus, Baku has been able to retain the charm and authenticity of its culture. Whether a romantic stroll on a summer evening alongside the Caspian Sea, or skiing in the mountains, the experience will surely be unforgettable. With so much to offer, perhaps Azerbaijan will also ‘hold your breath’ too.