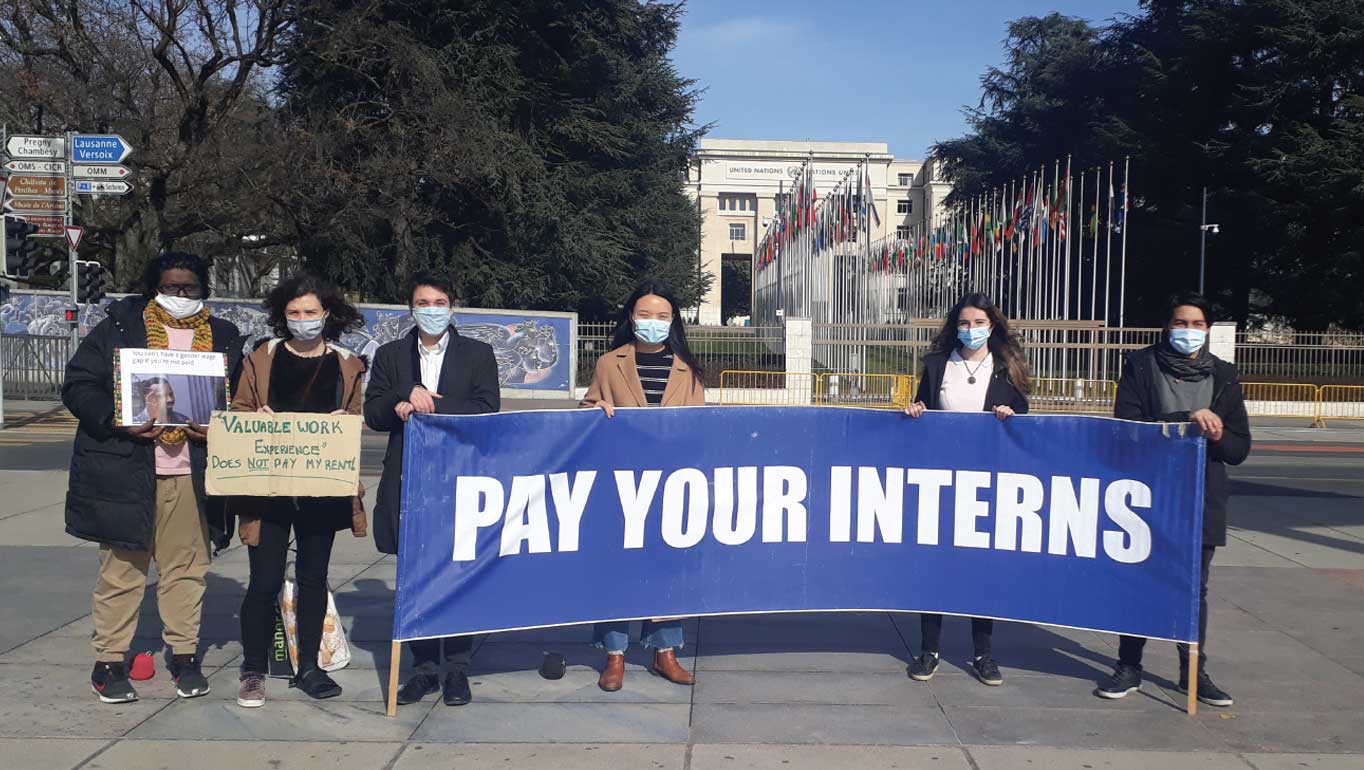 The United Nations (UN) first introduced internships in the 1950s with the objective of providing opportunities to better understand the principles, purposes, and activities of the UN; in short, these internship opportunities were meant to be educational.

Over sixty years later, the internship program has grown tremendously in size – there are thousands of interns working for the UN every year – but the educational opportunity of a UN internship is limited to a select few because most UN internships are unpaid.

Socio-economic discrimination and lack of representation Unpaid internships are inherently discriminatory against individuals from lower-income backgrounds, as they are unable to take on the financial burden of an unpaid internship. This problem has simply been exacerbated by the COVID-19 pandemic as young professionals increasingly face economic hardships.

Unpaid internships severely limit diversity and representation within the UN Internship program because they are accessible only to those who can afford to fund an extended period of time in New York or Geneva while performing unpaid labor (or those who have accommodation, internet, and technology resources while internships are remote).

The UN internship program stands at odds with both Article 8 of the UN Charter and with SDGs 8 and 10 and is inconsistent with the UN principles of non-discrimination and equal opportunities. Fair Internship Initiative’s recent report found that only 14% of UN Interns come from low-income or lower-middle-income countries; vast numbers of talented candidates from lower socio-economic backgrounds are excluded, which exacerbates inequalities between and within countries.

Unpaid internships are also an issue of gender equality: two-thirds of unpaid interns at the UN identify as women. While women make up a majority of unpaid internships, men often make up large majorities of paid senior positions within international organizations, further exacerbating gender gaps in the professional world. The UN has repeatedly made declarations in favor of paid labor, its commitment to fair remuneration, and even celebrated International Women’s Day in early March with social media posts and virtual events. Despite these public statements, the UN continues to willingly perpetuate the gender wage gap and gender inequity. Women and gender minorities around the world already lack access to many professional and economic opportunities, and exploiting their labor as unpaid interns in the UN system continues to exacerbate gender inequities in the workforce.

Are remote internships the solution?

UN internships are clearly inequitable and at odds with the organization’s professed principles, and some – including the UN Secretariat – are proposing remote internships as a potential permanent solution. However, an extensive survey conducted by FII across the UN system highlights problems of remote internship modalities. Concerns raised were not only related to the mental health and isolation of interns, but also to a decline in the quality of supervision and team engagement, and reduced opportunities for networking, learning, and career development.

The value of internships resides in their educational and career development content, which cannot be fully realized in a remote setting. Face-to-face mentoring, direct exposure to the UN working environment, and attending meetings and networking events are fundamental to ensure a mutually beneficial internship experience. Furthermore, a recent survey carried out across the Secretariat by the DOA’s Non-Staff Capability Unit revealed that 60% of UN interns oppose the normalization of remote internships beyond the pandemic.

It is also important to note that normalizing remote internships will not solve the current lack of representation. As long as the internship remains unpaid the barriers that prevent access to UN internships will continue to exist. Even if young professionals can perform internships from anywhere in the world they still need to pay for housing, living expenses, stable internet access, and computers.

Unpaid internships disproportionately hurt individuals with minority backgrounds and introduce unnecessary barriers for individuals in underrepresented groups; until all UN internships are paid, there will continue to be a lack of representation, especially of young professionals from low-income and lower-middle-income countries. Claims that unpaid remote internships are more accessible because they allow for people to complete them wherever they are in the world ignore the fact that interns still have to pay for living expenses, access to relevant technology, and reliable WiFi.

Recognition of interns’ rights to paid labor is long overdue, and as the world recovers from the pandemic, the UN has an opportunity to rebuild itself with more inclusive opportunities and live up to the principles that they so readily expect of others on the world stage. Ensuring that all UN interns are paid is a necessary step in protecting the rights of the organization’s laborers, and in making sure that the incredible educational opportunities that exist in a UN internship are accessible to all young professionals.