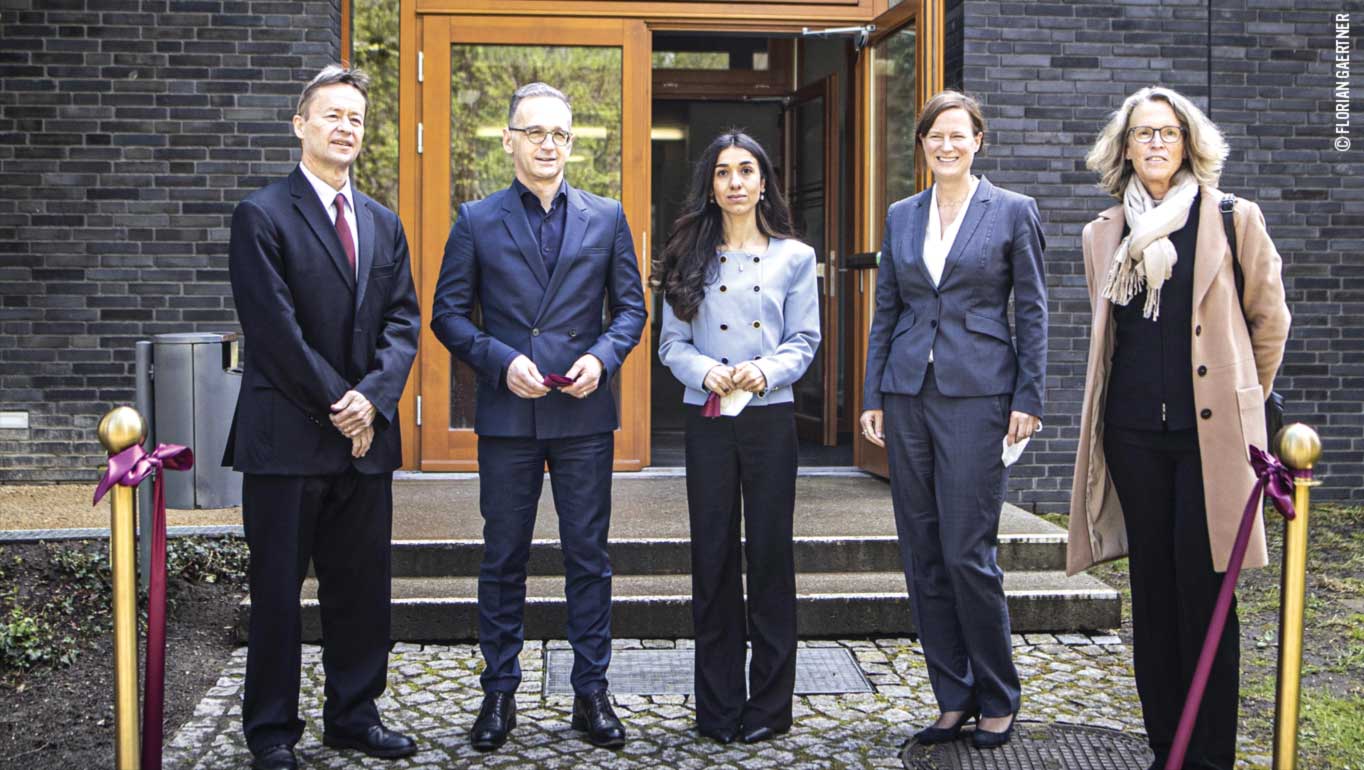 Women and girls are not victims, they are the key to the future
Germany’s Permanent Representative Katharina Stasch on her career and the importance of empowering women
By Max Kunte*
2 Mar 2022

Germany’s recently elected government has shown a commitment to implementing gender equality. A gender-balanced cabinet and female Foreign Minister send strong signals of this commitment. Additionally, for the first time the German Permanent Missions to Geneva and New York are led by women ambassadors.

Please tell us briefly about your career, why you joined the diplomatic service, and how you were appointed to your current position as Permanent Representative of Germany to the UN?

I started my career as a lawyer in an international law firm and have worked in national and international politics for the last 15 years Among my key priorities at my last posting in Berlin as Chief of Staff and Head of the Foreign Minister’s Officer, were shaping the Alliance of Multilateralism, membership in the UN Security Council, and combating hate speech. Multilateralism needs to be at the heart of our policies: we can only tackle the challenges of our time together. Therefore, I am thankful that I was posted to Geneva, the heart of multilateralism.

Germany has its first gender-equal cabinet. Does the German Permanent Mission to Geneva have any goals relating to gender equality?

Women and girls are disproportionately affected by violent conflict. In addition, the pandemic has exacerbated existing inequalities and created new ones. We have also seen a rise in domestic violence. We owe it to the girls and women of this world to not give up, but to accelerate action and step up our efforts. This is why, here in Geneva, we will always take gender issues into account when it comes to our humanitarian aid and human rights projects. However, and very importantly, women and girls are not victims, they are key when it comes to building a better future. We know that lasting peace becomes significantly more likely when women are part of peace processes. We therefore need to consistently involve women in peacebuilding processes around the world.

We advocate for gender equality in the Human Rights Council, and beyond, and we support OHCHR’s related work. As Vice-President of the Human Rights Council (currently as the only woman in this position) I have also joined the “Gender Champions” initiative. In line with our Third National Action Plan on Women, Peace and Security, we are committed to mainstreaming gender equality and women’s empowerment in all organizations here in Geneva.

In what ways has the political and diplomatic field changed in relation to gender equality, diversity, and inclusion since you started working?

About ten years ago, when I had first become Chief of Staff, I was recruiting the head of one of the sections within the ministry. I was given many names, none of them female. When I enquired why, the answer was: “Ah no, she cannot do it, she has children.” This is specific for all women, who have to work harder for the same recognition. Too often women do not get considered in the recruitment process, because others assume – for example – that a successful career is not compatible with being a mother. I strongly believe that everybody should choose for themselves how much time to spend with their family and on their career, but we should give everybody a chance and not decide for others. We also need to ensure that career and family are compatible, for men and women. And, by the way, I did find a woman for that job and she was brilliant.

Last year, we opened a portrait gallery in the Ministry of Foreign Affairs, picturing women who had been the first in their jobs. But there are also plain mirrors for every embassy that had never been led by a woman. And there were – and still are – too many mirrors. In 151 years of history of the diplomatic service I had only become the sixth woman to lead one of the major embassies.

Change is often incremental. 2021 marked the first time that both the Permanent Missions in Geneva and in New York were led by female ambassadors. This might be a small step, but an important one. There is still a long way to go. I am proud that with former Foreign Minister Heiko Maas a process of reflection has started, laying the foundations for more gender equality, and that we are now implementing a feminist foreign policy with the new Foreign Minister, Annalena Baerbock, also the first woman in this position. How can we credibly advocate for more gender equality when we ourselves don’t live up to it?

How has your previous work as a lawyer and in German politics influenced the way in which you currently approach your work at the United Nations?

Working in German politics and as a lawyer has taught me two things. Firstly, to be focused on what really matters. What matters in Geneva is: we need to build a new global health architecture to be better prepared and to fight the pandemic. International solidarity is key. A strong WHO is key. This is why Germany became the biggest donor of the WHO, contributing 2.2 billion Euros to COVAX and the Act-Accelerator so far.

What really matters is a strong Human Rights Council which speaks up to dire human rights situations and strives to further develop the notion of human rights in our time. That is why we were, together with partners, working towards the recognition of the right to a clean, healthy and sustainable environment in the Human Rights Council. This is why we led the resolution on the right to privacy in a digital world. And this is why we always want to bring in the gender perspective of human rights. And what really matters here in Geneva is the fight against antisemitism and racism. Secondly, working in German politics has also taught me to be pragmatic. It’s not great words that count, but every single step – often heavily fought for – to change reality. Even if it is a small step. I am deeply convinced that we can only fight the global challenges of today together. Multilateralism and a strong United Nations are needed more than ever.