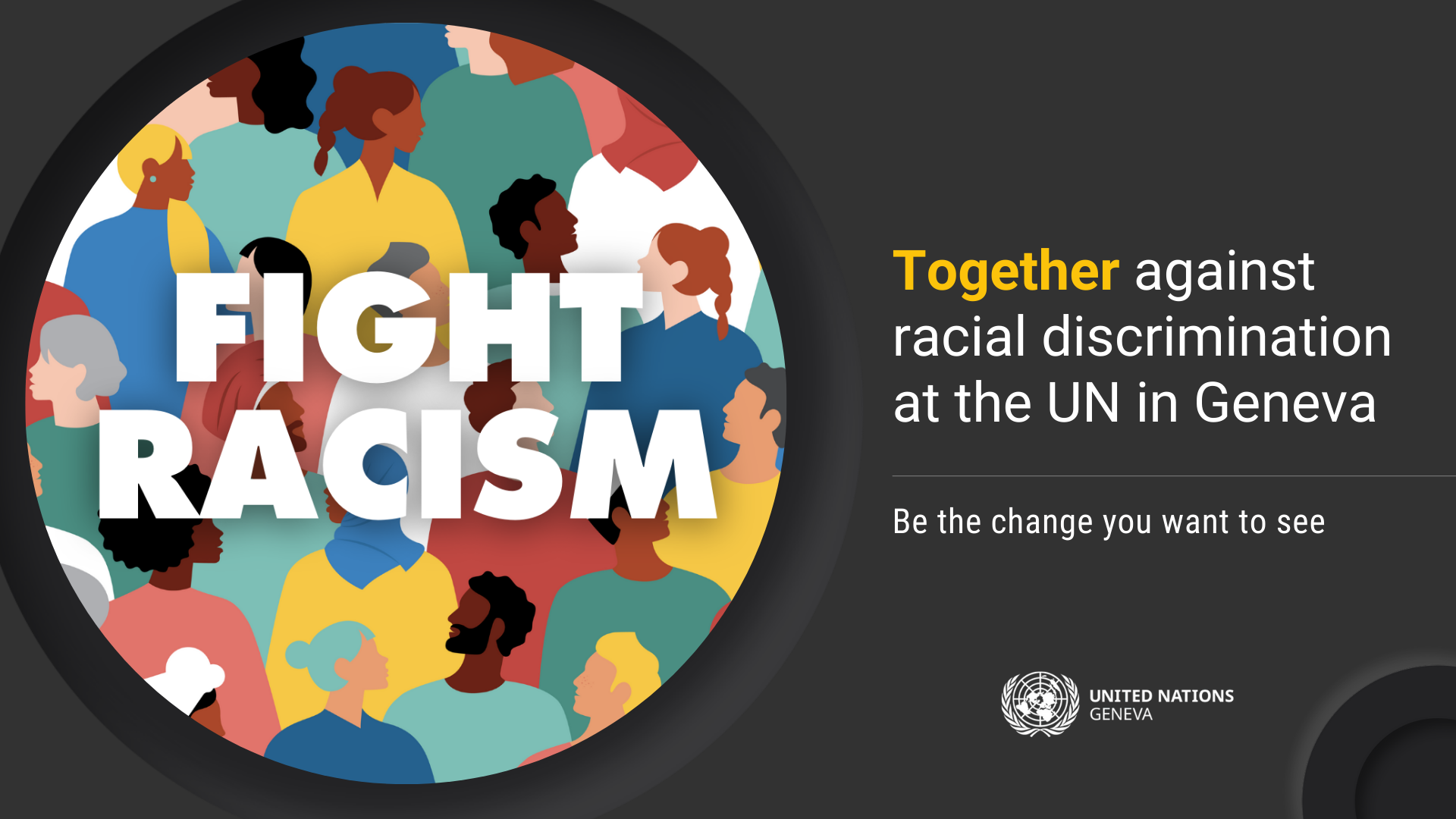 “Be the change you want to see” is the call to action from the recently appointed Working Group* on Addressing Racism in the Workplace, tasked with supporting the Director-General of UN Geneva, Tatiana Valovaya, to develop a clear response to racial discrimination.

This is part of the UN’s global approach to walking the talk and reflecting its core values in how it operates. Following a call for volunteers last September, the Working Group comprising 10 volunteers representing a number of Geneva based agencies was approved by Ms. Valovaya to identify, prevent and address racial discrimination within our workplace.

Reflecting a rich cross-section of age, gender, ethnicity and experience, this Working Group has coalesced around the core deliverable of promoting a more harmonious working environment based on the principle of equality, with zero tolerance for discrimination in all its forms.

This is YOUR working group. We are here to reflect your concerns, questions, fears and aspirations. To give you a safe space to share, learn and better understand the informal and formal mechanisms in the UN system to address racist behaviour, to report it and seek redress.

We are aware that this is a complicated and complex process. However, events witnessed over the last two years have made the invisible very visible and confirmed that racial discrimination remains one of the most debilitating and destabilizing elements of our society.

The reasons for discrimination are complex and multigenerational. It can be overt or show itself through unconscious bias, racially insensitive language or through microaggressions.

In view of this, this committed Working Group hopes to give a voice to colleagues who have experienced racism and ensure that the UN Geneva community places equality, inclusion and non-discrimination at the heart of its policies, programmes and operations.

The very ethos of the UN is multiculturalism. But historical patterns have left the organization wanting in many regards. We know this. We recognize this. The next stage must be recalibrating and recreating a UN Secretariat that truly reflects its diverse membership of countries, states and territories.

Various surveys carried out over the last few years have made it clear that the UN has a problem, no different than that of the wider society in which it operates, but a problem nonetheless. The surveys have indicated that between 33% and 53% of staff have experienced racial discrimination. And the real figures might be higher!

The surveys also largely indicated that the discrimination was based on national origin and that it has primarily impacted career opportunities. Worryingly, most of the surveys show that staff have not taken any action to report acts of discrimination due to lack of trust and knowledge in the reporting and recourse system and the fear of retaliation.

The Working Group aims to build on the positive work that has been done before. From the existing survey results to the ongoing work being done by the Joint Inspection Unit to the Secretary-General’s Task Force on Addressing Racism and Promoting Dignity for All in the UN, and the anticipated Secretary-General’s strategic action plan to address racism and racial discrimination within the UN.

By working with the Office of the Ombudsman, the Office of Staff Legal Assistance, Human Resources and others, we want to help create a culture of accountability, holding those who practice racist and discriminatory practices to account but also holding each one of us accountable to each other.

We want to help colleagues understand bystander behaviour and better recognize when someone in their office or social group is being discriminated against and needs help. We all have that obligation to support and protect each other.

During the first year of the Working Group, we aim to facilitate conversations, serve as a platform for open and honest dialogues, identify training opportunities, and engage in discussions with relevant stakeholders. We aim to reflect your views, your understanding of where the gaps are in the formal and informal processes and to better identify the kind of UN wide training that would be useful to you.

We need each one of you to be multipliers of this work. We need to ensure that everyone participates in this crucial conversation. We can all make a difference and we should all be ready to actively engage.  We will only be successful as a UN community if we reach as many people as possible. Be an agent of change!

We want to hear from you:

Write to us at racismworkinggroupunog@un.org and let us create a workplace that we can all be proud of.

As part of our next steps, we are planning the following events in the near future a few events:

These two initial events will plainly set out what is currently available and give you a platform to react and respond. Further events will focus on more granular aspects of discrimination and how we can improve areas such as staffing and career progression, human resources strategies, workplace culture and practices, implicit bias and how to address them, as well as how to foster better awareness and communication.

Be the change you want to see. Be the change we need to be. Join us and be part of this revolution of inclusion.

* Matthew Wilson, Chief of Special Projects at ITC, and member of the UNOG Working Group on Addressing Racism in the Workplace.
Read more articles about INSIDE VIEW