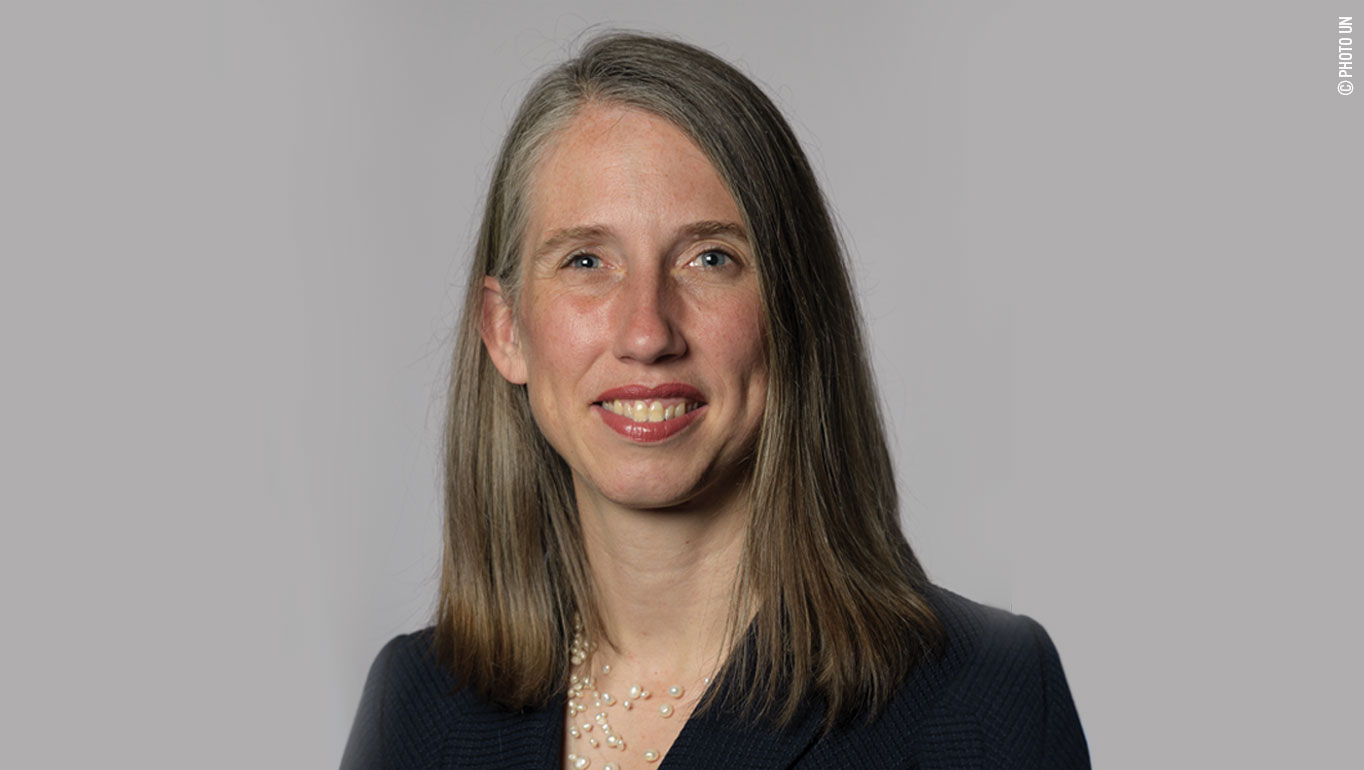 What will conferences look like after Covid?
We talk to Cherith Ann Norman Chalet, Assistant Secretary-General for General Assembly and Conference Management
By Prisca Chaoui*
1 Jun 2022

The last years have witnessed a shift in the conference management pattern. What are in your views the main changes that have occurred?

It is important to distinguish between pre-COVID-19 and the time since the outbreak of the pandemic. Before COVID the conference operations have witnessed a continuous increase in the number of meetings taking place, as reflected in the calendar of conferences adopted by the General Assembly every year. When COVID began and lockdowns were implemented in the various duty stations, in-person meetings became impossible practically overnight, and the focus shifted immediately to ensuring the business continuity of the intergovernmental processes of the United Nations.

This required a transition to virtual working methods and remote participation in order to safeguard the health of meeting participants and United Nations personnel. To minimize the dangers associated with indoor gatherings, virtual and hybrid meetings remained the preferred options even after some physical meeting activity became possible again, albeit with limited numbers of participants and under strict social distancing measures. In this regard, the restrictions on in-person gatherings have perhaps had a more significant impact on the pattern of conferences than on some other areas of work, as conferencing has always been about face-to-face meetings and close personal contacts. As many of us experienced, the level of engagement in remote meetings is not comparable to what it could be if they were taking place in person. This was, of course, not possible in large parts of the world for large periods of 2020 and 2021.

One of the principal challenges at the very outset was the absence of an intergovernmentally agreed definition of what constitutes a virtual meeting and which rules of procedure should be followed. Another was that the restrictions preventing in-person meetings also applied to the collocation of interpreters in booths, which resulted in the necessity to provide Remote Simultaneous Interpretation (RSI) to ensure that multilingualism, as a fundamental value of the Organization, was not undermined and that the equality of the six official languages of the United Nations was guaranteed.

In terms of the provision of Secretariat services in the conference rooms themselves – another important component of our work – various innovative working methods facilitated decision-making even in the absence of the possibility of convening a formal meeting. For example, the General Assembly in New York conducted elections in such a way that it was able to elect non-permanent members of the Security Council and members of ECOSOC without a physical plenary meeting, thus guaranteeing the continued functioning of the other principal organs. However, these were extraordinary measures to ensure business continuity when an in-person meeting was not possible for a prolonged period of time.

With most COVID-related restrictions lifted and conference capacity having more or less returned to pre-pandemic levels, we see that the demand for United Nations conference services remains very strong. Member States want, and need, to meet to discuss and agree on the extraordinarily wide range of issues that the UN is responsible for. I remain confident, therefore, that the reduction in numbers of meetings that we saw in the past two years is not a long-term trend, but rather a result of COVID-related constraints.

Now, looking to the future, we are aiming to draw on the lessons learned to maintain our ability to provide conference services even under the most difficult of circumstances, while continuing to improve our operations. The past two years have clearly shown the importance of modern technology for our success in ensuring the continuity of intergovernmental processes. It has also reaffirmed our strategic outlook of continuing to explore technological and other innovations that advance the effectiveness and efficiency of conference servicing operations.

Translators are seeing their workload being increased. Interpreters are now faced with the challenges of RSI. What are the concrete actions DGACM management is taking to preserve the health and welfare of its staff?

The health and welfare of staff is our top priority. For the past two years we were able to ensure the optimal provision of conference resources in spite of the COVID-related challenges, which has been a tremendous achievement that would not have been possible without the dedication and professionalism of DGACM staff.

In regard to translation, we have witnessed dramatic changes in the past few years due the evolution of language technologies, in particular computer-assisted translation and machine translation. DGACM is leader in this area and its language tools are now used across the UN System. Currently, translators use tools, in our case eLUNa, to help them translate faster and improve quality. eLUNa, our computer-assisted translation tool, automatically identifies all previously translated sentences, tracks any change in wording, hyperlinks document symbols and official terminology records, and sends any new sentence to the best neural machine translation engines available in the market. Things have changed a lot over the past 20 years. Now translators revise recycled text and post-edit draft machine translation outputs. The General Assembly has favourably acknowledged that and has adjusted the workload standards accordingly.

While these technologies enable increased productivity to better support the documentation needs of the Organization, improving work-life balance for translators requires revamping working methods and procedures with the inputs of managers and staff. To this end, we have reviewed the generic job profiles of translators and established a series of task forces intended to modernize and harmonize training and professional development practices, define and enhance quality processes, and improve measurability and comparability of our key performance indicators across the four duty stations of DGACM. In short, we have the tools, and what we need is to change the way we work to be more agile and increase job satisfaction for translators. In this, staff’s voices are crucial.

Regarding RSI, it took some time to put the necessary technology and equipment in place to allow remotely provided interpretation. However, despite extensive efforts, remote participation does not always produce high enough quality sound for interpreters. Following consultations with Division of Healthcare Management & Occupational Safety and Health (DHMOSH) colleagues to mitigate any potential impact on interpreters’ health and wellbeing while in this business continuity mode, our approach has been to reduce interpretation length for meetings with more than 30 minutes of remote participation to two hours, rather than the normal three. Additionally, the number of meetings that the interpreters had to service over a week was also reduced –from seven for those operating from their booths to five for those who had to work from home. It was not a decision that was welcomed by meeting organizers, but DGACM continues to underline the importance of considering interpreters’ health and welfare whenever discussions about the future of remote conferencing arise.

What are, in your view, the main issues that you will have to deal with during the upcoming General Assembly session when it comes to DGACM management?

I can tell you that preparations for the 77th regular session of the General Assembly, which is scheduled to open on 13 September 2022, have already begun. As you know, in conference management, our work starts well ahead of the official opening of any given meeting, as is reflected in the distinction between pre-, in- and post-session phases of conference servicing support.

To give you an example, the preliminary list of items to be included in the provisional agenda of the upcoming session of the General Assembly was issued on 15 February and contains a list of 177 items. By the time the Assembly has the draft agenda before it in September, we will have issued several further related documents, including an annotation of each agenda item and a supplementary list.

To give you another example, until 2002 the Presidents of the General Assembly were elected on the actual day of the opening of the session. Since then, the election of the President takes place at least three months prior to the opening of the session so that incoming presidencies have more time to prepare for the challenges ahead. DGACM is actively engaged in ensuring that the transition from one session to the next runs as smoothly as possible.

Clearly, the biggest challenge in the past two years was due to the pandemic and the resultant disruption to in-person meetings. What the situation will look like this fall is difficult to know at this time. The High-Level Week in September constitutes one of the top highlights on the calendar of international diplomacy as a forum where all States can present their views and positions on the most pressing issues of the day, and there has been a steady increase over the years in terms of protocol level. Nowadays, the debate predominantly features speeches delivered by Heads of State or Government which further highlights the unique convening power of the United Nations. As the Secretariat, it is our job to ensure the efficient organization and seamless conduct of this exceptional event.

Due to the unprecedented limitations, and in line with the General Assembly’s decision, the general debate in September 2020 mainly featured pre-recorded video messages. The following year, the debate featured 81 pre-recorded video messages. It is our hope that this year, we can welcome as many heads of delegation in the General Assembly as before the pandemic.

In terms of conference management policies, we very much look forward to engaging during the upcoming session with the members of the Committee on Conferences, whose mandate it is to advise the General Assembly on the current and future requirements of the Organization for conference services. Guided by our objective of continuous improvement and ensuring the optimum utilization of conference facilities and services, as mandated by Member States, we will assist the Committee and the Fifth Committee in their deliberations on these matters. More generally speaking, we will continue to ensure the uninterrupted functioning of the intergovernmental work of the United Nations and are firmly committed to delivering high-quality conference services in an efficient and effective manner, while striving for further innovation and optimizing working methods in line with Member States’ expectations.