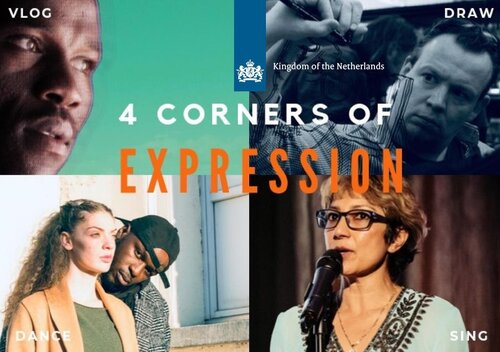 Leisure and culture
“We carry a package of trauma with us, sealed and put away”
By Permanent Representation of the Kingdom of the Netherlands to the UN*
25 Feb 2020

In 2013, the conflict in Sudan forced Abdul Aziz Muhamat to flee. He ended up in an Australian, off-shore detention centre, and managed to send out voice messages and videos to report on the miserable conditions of the refugees. In 2019, Aziz won The Martin Ennals Award for Human Rights Defenders, a Geneva based organisation. A few months after the ceremony, Switzerland granted him asylum and permanent residency.

Life as an activist started at school in Sudan

‘We were a group of 5 and we all shared a common belief, equal rights for all the Sudanese to forge one peaceful nation. We created a platform which we developed further at university. But political parties started extending their arms and we were seen as traitors. Now, all 5 of us live in exile.’

‘We come from oppressive regimes around the world. We don’t have freedom of expression. We are tortured for it.’

‘I was 19 and lived at my uncle’s home. The regime started threatening him, accusing him of supporting a rebellious group. One night in 2013, he woke me up, we had to leave. We left for the airport together, he had planned his escape and had organised a ticket and visa for Indonesia for me. He went one way, I another, we haven’t seen each other since.’

The journey was terrifying and traumatic

‘It was just me, a tiny bag with clothes and my passport. I had no idea where Indonesia even was. I had left everyone and everything behind without saying goodbye. UNHCR Indonesia could not help me directly and soon afterwards I found out that the Sudanese regime was after me. I couldn’t go back home. My options started narrowing down. ‘Go to Australia, once you cross the Indian Ocean you are safe and in a democratic country’ they told me. So I did.’

‘My mission was to let the world know what was happening. I started filming, and sending out messages and vlogs with a smuggled phone.’

Everyone on the boat had fear in their eyes

‘The young men, the fathers, mothers and children. We didn’t talk to each other. Unexpectedly, we were intercepted by the Australian authorities. The coastguards picked us out of the water, unknowing of the trauma we carried with us. Along with hundreds of other refugees and asylum seekers, I was sent to a detention centre on Manus Island in Papua New Guinea.’

‘This wasn’t about dignity, it was about surviving.’

No names, no rights

‘I wasn’t Aziz, I was number 002. To me, the number, the cruelty, the inequality and the dead-end situation symbolised the concentration camps of World War II. Recognising the situation, I switched on again, once again becoming the political activist from Sudan. My new mission was to let the world know what was happening here. I started filming and sending out messages with a smuggled phone. I knew it could get me into trouble but I accepted that. This wasn’t about dignity, it was about surviving.’

People were suffering, cutting themselves, dying of medical negligence and suicide

‘I saw this every single day and decided to be a survivor, a counsellor. By taking on this role, helping others, I survived myself. One day, after six years, I got the unforgettable phone call from the Martin Ennals Award to tell me that I had been nominated. Ironically, I couldn’t take the call because I was preventing a detainee to take his life.’

‘I decided to be a survivor, a counsellor. By taking on this role, helping others, I survived myself’

Human rights mean people are born equal, but I don’t see the equality

‘We come from oppressive regimes around the world, we don’t have freedom of expression. We’re tortured for it. The narrative is that refugees take the jobs and create violence in the community. Consequently we are trying to prove that we are capable, good people who want to contribute. We do carry a package of trauma with us, sealed and put away because people do not want to hear it. I am now in the privileged position to speak out, and when people hear my story, they might make a better judgement of who I am. Not the asylum seeker, the migrant or the refugee but Aziz.’