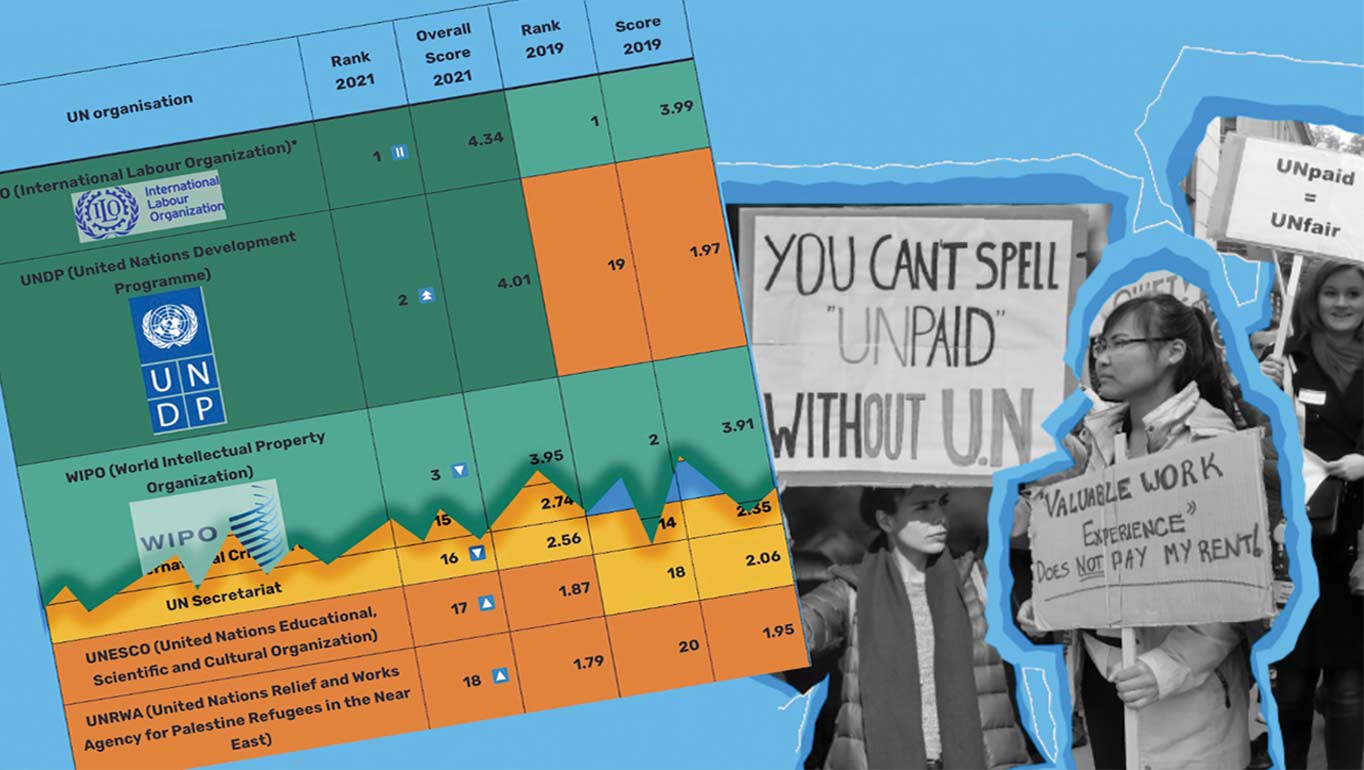 UNDP now leads the way with its internship programs
UN Development Programme rises laudably in the Internship Quality Index while UNRWA, UNESCO, and the UN Secretariat continue to lag behind
By Philippa Shoemark*
1 Nov 2022

This May, the Fair Internship Initiative published an update to the Internship Quality Index, which draws on data collected from interns across the UN System to transparently and systematically score and rank UN organizations according to the quality and inclusiveness of their internship programs.

The index is based on a range of indicators developed in line with the benchmarking framework for good practices in internship programs, proposed back in 2018 by the UN’s independent system-wide oversight body, the Joint Inspection Unit (JIU/REP/2018/1).

In the first edition of the index, conducted and published in 2019, the United Nations Development Programme (UNDP) received a ‘Poor’ grade overall and was ranked fourth-to-last out of the 22 UN organizations that were assessed. In the recently published update, which is derived from a survey of UN interns in 2020 and 2021, UNDP has rocketed up the ranking and is now in second place, only behind the International Labour Organization (ILO), this time receiving an overall grade in the highest possible (‘Very Good’) range.

How did UNDP manage to turn things around so dramatically?

In the same year that the original Internship Quality Index was published, UNDP launched a three-year strategy, ’People for 2030,’ to progressively transform its workplace culture, reform its HR policies and procedures, and improve the working experience for everyone in the organization, with the aim of ensuring that its workforce is fully geared towards delivering on the 2030 Sustainable Development Goals. Crucially, interns were included in the scope of “everyone in the organization”—which, outrageously, cannot always be taken for granted.

In January 2020, UNDP introduced stipends for all interns, thereby opening up internship opportunities to talented young applicants from less advantaged backgrounds, for whom they had previously not been viable. As UNDP’s HR Director, David Bearfield, stated at the Fair Internship Initiative’s International Interns Day event last year, “Fostering and leveraging diversity is fundamentally important for a development organization that has a workforce of around 20,000 people working in 170 countries.”

UNDP invested not only in providing stipends, but also in holistically reforming its internship program, and the updated Internship Quality Index clearly shows that this has paid off: UNDP substantially improved its scores on almost all indicators, not only in the area of Equal Opportunities, but also with respect to the application process, onboarding, working conditions, feedback mechanisms, and career development.

This remarkable two-year turnaround, from adopting almost none to almost all of the JIU’s recommended good practices for internship programs, goes to show that where there’s a will there really is a way, even in the midst of a global pandemic.

Several other organizations have made considerable improvements since 2019, with credit due in particular to UN Women, which was bottom of the original ranking but has now risen 13 positions and leveled up from ‘Poor’ to ‘Good’; as well as to WHO, UNICEF and UNIDO, each of which improved their grades from ‘Mediocre’ to ‘Good,’ and ILO which, despite topping the ranking the first time around, still found room to improve from ‘Good’ to ‘Very Good.’ However, both UNRWA and UNESCO received ‘Poor’ grades in the updated index, and five UN entities, including the Secretariat (which ranks third from bottom), were graded ‘Mediocre’.

UN Secretary-General Antonio Guterres has spoken frequently about the importance of diversity, and specifically the inclusion and participation of young people, to the UN’s aims of conflict prevention, peacebuilding, sustainable development and strengthening of human rights. When will he follow the good leadership example of UNDP Administrator Achim Steiner, and endorse action to implement adequate stipends, along with other reforms, in line with the JIU benchmarks to ensure equitable access to quality internships across the UN system?

Until he does, anyone who is thinking of undertaking a UN internship would be well-advised to consult the Internship Quality Index before submitting their application.

* Philippa Shoemark is a Member of the Fair Internship Initiative.
Read more articles about INSIDE VIEW