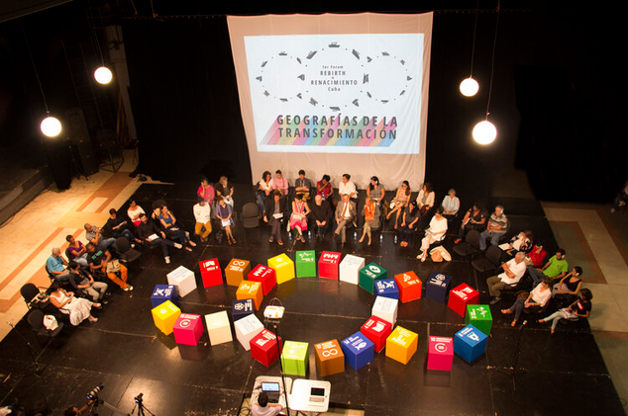 Interview (over skype) with maestro Michelangelo Pistoletto, the world-renowned artist, creator of the Rebirth sculpture at the Palais des Nations. Maestro Pistoletto is still recovering from the COVID-19 virus after a long isolation in a hospital in Biella, Italy.

Maestro, it gives me immense pleasure to interview you today and see you regaining your health. We know that you were in isolation at the hospital for a long time. What did you learn from that experience?

Through this illness, despite being isolated and distanced, I felt an inevitable connection with the rest of the world, living and suffering through the same experience that I was living. While in my hospital room, staring at the white wall in front of me, I felt an immense emptiness, yet full of potential. This emptiness was the global silence, where the whole world was united to fight this pandemic, a true global war. But the emptiness also creates new relationships, motivates a desire for balance, stimulates new creativity and inspires a rebirth of humanity.

I also thought a lot about the vital significance of the Rebirth symbol during this time, the symbol of many of my sculptures including the one at the Palais des Nations. I visualized my emptiness as the large circle in the middle that connects the two smaller ones, representing the natural world on the one hand, and the man-made artificial world on the other. The situation we are living clearly shows it is now time for a strong balance between the two worlds, and to turn the emptiness into a creative force.

Although I was only 12 in 1945, I remember the end of the war with incredible lucidity. From 1943 to 1945, my parents and I were living in Susa after escaping from Turin that was under heavy bombing. Those were years of terror during which we did not really ‘live’, we simply ‘survived’.  On liberation day, I felt I was born again.

I did not have any notions regarding the United Nations at the time, but I was later proud to see how the UN was born out of the ashes of the war, as an absolute necessity for humanity. The creation of the UN corresponded to the start of a new world, a modern society, developing fast with new industries, economies, markets. Unfortunately, development was not equally distributed over the years. This unbalance is still unsolved, and the UN has much work to do in this regard.

Your Rebirth sculpture at the Palais des Nations in Geneva is more relevant to the world than ever. The post COVID world, 75 years after WWII, will need a Rebirth. What do you envisage? What are the main challenges?

The Rebirth sculpture was inaugurated in Geneva on the occasion of the 70th anniversary of the United Nations. Let’s not forget the sculpture is composed of 193 stones each one representing a UN member State.  The sculpture connects the stones, and there are no boundaries between them. This is what nations should do, be united despite their differences, beyond borders, around the same purpose. As mentioned, it reminds us of the need for a new balance between the natural and the human made. In the same way it is to be intended the role of politics and diplomacy, to find balance, compromise, to meet ‘in the middle’.

We should also remember that the sculpture was inaugurated at the same time as the Sustainable Development Goals of the UN. They were born together, and immediately after the unveiling of the Rebirth sculpture in Geneva, I created a Rebirth sculpture in Cuba, made with the symbols of the 17 SDGs. I wanted the two concepts to be connected.

How can art help facilitate a global Rebirth?

Starting in the middle of the 20th century, art gained autonomy, something it never had before. Art used to be at the service of the power of the Palace, and was understood as entertainment, or a system to reproduce image of the reality.

In the 20th century, every artist became free in his/her expression. But for me freedom has become responsibility. Art is a common property, shared creativity can influence life, economy, politics and our relationship with nature in a generative way when inspired by artistic responsibility.

What is the message you want to send to the UN staff and delegates who will be reading this interview?

I hope that all those that work in and with the United Nations will be free to assume their responsibilities, free to decide and work together at a common and balanced future, towards ‘Demopraxy’. Yes, we are not misspelling Democracy. Democracy is about people exercising power and government, but the people are made up of individuals who as singles cannot have power. What I am advocating is to move from ideology to ‘practice’; and acknowledge that power is already within groups of people, small or big, united in associations, foundations, enterprises, consortia, clubs, working groups; all of them  are already micro-governments that brought into dialogue can form governments of shared responsibility

People in the United Nations meet in small and large groups, formal and informal, on so many issues and topics, and could help ‘Demopraxy’ become the way ahead, beyond ideologies, where the results of democratic concepts get put into practice for the common good.