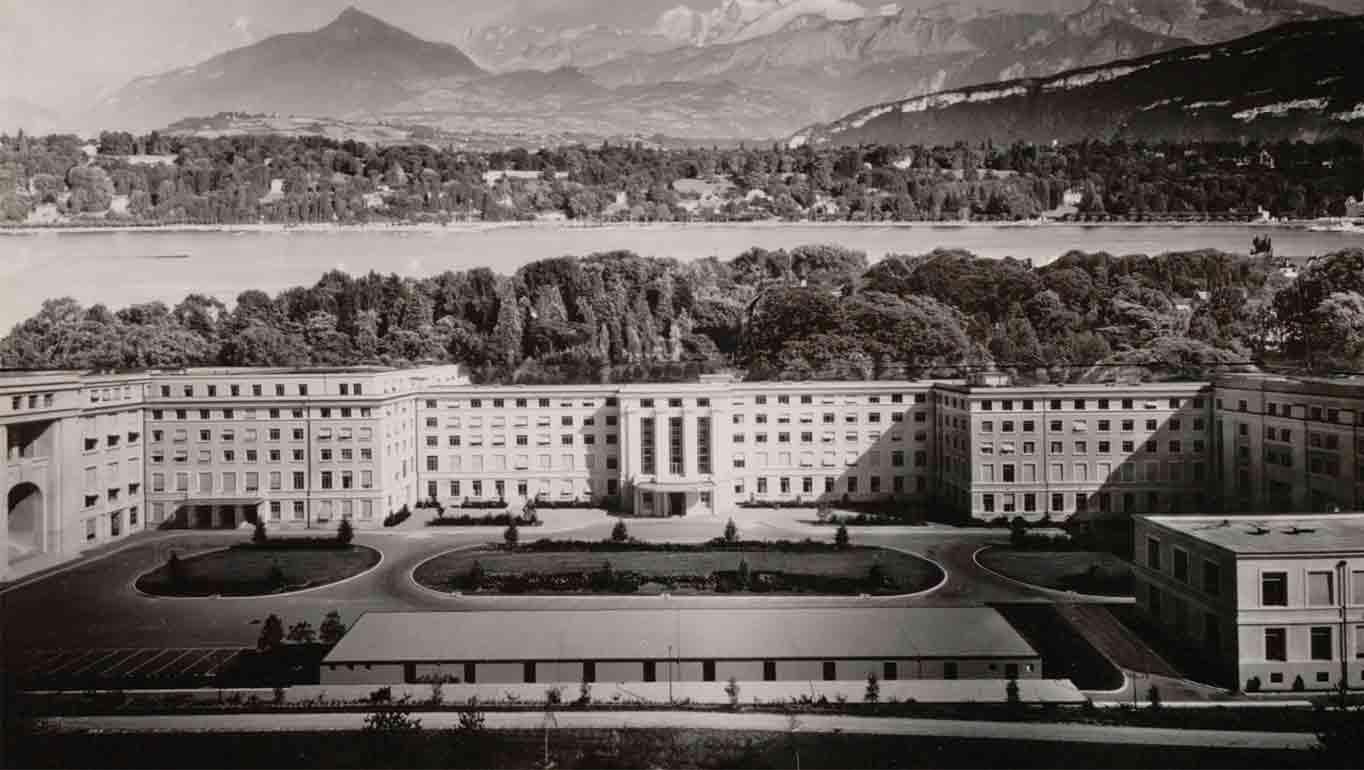 The League of Nations uniforms and the new Palais des Nations
Uniforms promote the image and values of an organization, creating a sense of belonging and pride among staff members while being easily identifiable
By Kelly Le Normand*
1 Nov 2022

The League of Nations, the precursor to the United Nations, was founded on 10 January 1920 in response to the atrocities of World War I. United States President Woodrow Wilson was one of the main initiators of the project, preaching for the creation of a new-standing organization for international cooperation dedicated to peace that would guarantee the political independence and integrity of its member states.

Geneva was chosen over Brussels or the Hague to host the League of Nations Secretariat, thanks to the joint efforts of Federal Councilor Gustave Ador and economist William E. Rappard. On 9 August 1920, a small League of Nations delegation came to Geneva to found the permanent headquarters of the new organization and spotted the Hôtel National by Lake Geneva. The League of Nations bought the building and turned the former hotel into offices. The Hôtel National later changed name to become the Palais Wilson in homage to U.S. President Woodrow Wilson.

An international architectural competition was launched in 1926 to design the Palais des Nations and consequently replace the Palais Wilson for the seat of the League of Nations. The $2 million donation by John D. Rockefeller Jr., to include a library, disrupted plans for a new building along the shores of Lake Geneva and required a larger parcel of land. The 46-hectare Ariana Park, bequeathed by Gustave Revilliod to the city of Geneva, proved an ideal location.

Moving to the Palais des Nations

In 1936, the League of Nations Secretariat moved to its newly built premises, the Palais des Nations, whose dimensions meant hiring additional staff and dressing them with appropriate uniforms. The process was all the more important that the existence of the League of Nations, the first worldwide intergovernmental organization dedicated to establishing and maintaining world peace, thrived on the acknowledgement and trust of its member states. To look like a credible organization, it had to have a sense of decorum; the League had to ‘look’ the part. For this reason, in 1935, the League of Nations Internal Services were instructed to perform a number of studies, such as inquiring about the uniforms in use in other important governmental organizations (the House of Commons & the House of Lords in London, the French Parliament, the French Chamber of Deputies, the Swiss Parliament, etc.) and inviting some of the prominent British firms specialized in uniform-making to send illustrated material.

After two years of discussion, from 1935 to 1937, it was decided that uniforms would be dark blue, the League of Nations dominant color and the preferred color of the Secretary-General. These were mainly imposed on service staff and were meant to show slight differences between the various categories of civil servants (office keepers, teaboys, elevator boys, ushers, and messengers). Blue uniforms with light blue piping would be worn exclusively by temporary Securitas staff. Office keepers and messengers would wear similar uniforms (ill.1), with the exception that office keepers would have a metal badge fixed on the left side of the tunic and would wear a thin gold braid above the cuff (ill.2) to distinguish them from messengers.

Additionally, office keepers on duty on the Secretary-General’s floor, during Council meetings, and ushers, would all wear distinctive features consisting of a chevron above the braid and a frockcoat (ill.3). The frockcoat, however, proved unpractical considering that ushers spent most of their day seated. Both ushers and messengers wore black crease-resistant ties.

In 1937, it was agreed that there would be two uniforms, a summer and a winter one. Finding appropriate clothing for staff working outside proved challenging, as it had to be simultaneously warm, rain-proof, and comfortable. Pieces of fabric were mostly ordered from Swiss and British factories. Great emphasis was placed on the quality of the materials, using only strong and healthy sheep’s wool in place of artificial wools or any other inferior material. The uniform’s quality would then be checked by the Swiss Federal Military Department for free.

The League of Nations uniforms in the archives

The drawings in the archives were made by unknown artists working for firms hoping to collaborate with the League of Nations for the making of staff uniforms. The occasional presence of a stamp signals their rightful owners, and the diverse inscriptions turn them into real working tools, reminding us that these illustrations were expected to be returned to the firms due to their high production costs; their presence in the League of Nations Archives proves that these were, in fact, not returned. The men are either depicted colorfully or faceless, standing in frontal position with no background. The outfits are as diverse as the drawings themselves, ranging from detailed watercolors to simple pencil strokes. Some extravagant uniforms make for striking drawings, highlighting even the men’s shadows. Although impressive, these watercolors seem to divert attention from the real purpose of these works: to convince the customer of the practicality of their designs, which explains the League of Nations preference for more sober options. As for the actual uniforms produced, they were meant to be worn daily for up to two and a half years. Once used, they would become the property of their users following the removal of badges, which explains why none were kept in our collections and these are known only through sketches and photographs. The League of Nations uniforms were brought back to life in the 2012 film adaptation of the Belle Du Seigneur novel written by Albert Cohen.

The final choice of uniforms

It was crucial for the League of Nations Secretariat that the uniforms would be ready for the relocation to the newly built Palais des Nations and the entry into function of service staff. Yet, the choice of the final uniforms proved a lengthy process for the Internal Services, as evidenced by the length of the archival files in question. The never-ending decision-making process sometimes created tensions between departments (Personnel, Procurement Department, Internal Services, etc.). On some occasions, this led staff to wear worn-out uniforms and forced the administration to order last-minute outfits before important events, such as the Assembly.