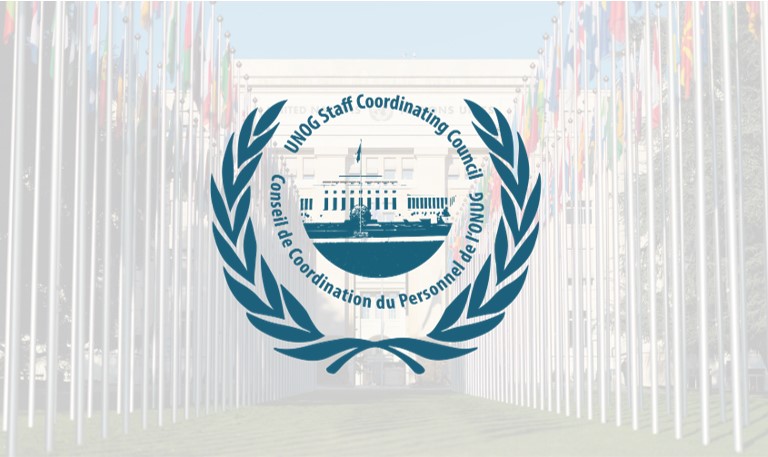 In early August we organized a town hall on Equal Pay, where we invited an OSLA lawyer to make a brief presentation following the judgement of the UN Dispute Tribunal, to explain on the grounds to appeal the judgement to the UN Appeals Tribunal. The Council decided to pursue the appeal based on the support expressed by staff at the meeting.

Town hall with the DG and the USG for Management

A record number of 800 staff members joined us at a town hall on 4 September with UNOG Director General Tatiana Valovaya and Under-Secretary-General for Management Catherine Pollard. At the meeting, we reiterated our concerns about the extremely low number of continuing appointments being awarded this year; fixed-term contracts that were being extended for shorter periods plus the problem faced by long-serving staff on temporary contracts.  We also took the opportunity to call upon management to accelerate measures to fight racism in the workplace.

The Council reaffirmed its commitment to continue its campaigns not only fighting for equal pay, but also to defend the interests of staff on issues such as racism, conditions of employment, the removal of barriers for G staff to apply to P positions.

The Council raised alarms on a report prepared by management: Future of the United Nations System Workforce.  A report which is recommending a shift towards ‘a more agile model contractual modality’, a move the council believes is designed to move staff to short, limited duration contracts.   Following the sharing of the report and the various concerns raised by the Council, Public Services International (a global Union Federation representing 30 million workers in 154 countries) wrote to the Secretary-General denouncing the report, stating that it is exactly these types of contracts that that lead to precarity and uncertainty within the UN.  They also expressed concerns that these types of practices fall short of basic labour standards, decent working conditions and are in addition, they are in contradiction to numerous UN principles and rules underpinning the independence of the international civil service.

At the request of the Council, a global town hall was held with the Controller which took place on 9 September regarding the regular budget liquidity crisis and the resulting hiring freeze. Staff were reassured that with careful management and the continuation of the hiring freeze, there should be sufficient cash to cover the payments of salaries and entitlements until November, possibly even December.

A total of 688 staff members answered the Council’s survey on racism in the workplace. The findings of the survey confirm that unfortunately, racism does exist within the United Nations. Respondents believed racism needed to be addressed in several different ways, including accountability and zero tolerance, training and sensitization, greater transparency in hiring, broader diversity, and a more open dialogue on the issue. The Council will use the results of this survey as the basis for their interactions with management both in Geneva and globally.

A letter to the Secretary General on the delegation of authority

The Council wrote to the Secretary-General at the end of October expressing it’s serious concerns at the new instrument of delegation of authority adopted in 2019. This new instrument, allows managers the possibility to grant themselves or those closest to them exceptions to rules, with little effective oversight by the Business Transformation and Accountability Division.  The letter,  also brought to his attention that already this new delegation had led to fragmentation and duplication in administrative services as OHCHR has set up its own administrative and human resources service, which will lead to the loss of jobs of UNOG staff and the increase of overhead costs to donors.

Collection to help the victims of the blast in Beirut

In August, the Council organized a collection to help victims of the devastating blast in Beirut. A total of 15,696 CHF was donated by staff. The Council approved to allocate a further 10,000 CHF considering the extremely difficult situation faced by the people of Lebanon and the total amount was transferred to the Lebanese Red Cross.

Be vigilant! Speak up! Be proactive! Innovate! Contribute!

In September the Council, THE UNION for all staff at UNOG (including UNCTAD, ECE, OHCHR, OCHA, UNDRR, UNRISD, and other Secretariat staff in Geneva) called for staff to play an active role in the protection of their staff rights and improvement of welfare initiatives by showing their active support to the Council.

In June and July, the Council intervened with the management of the Pension Fund to reverse the decision to move the finance section of the Fund from Geneva to New York. The Council also brought this issue to the attention of CCISUA, the federation of staff unions, resulting in the adoption of a resolution calling the Board not only to keep the Finance section in Geneva, but also to reinstate the D1 position (Head of EMEA office- Europe, Middle East and Africa) in Geneva.  Our efforts have resulted in the reconsideration of the decision, which is now being placed on hold for the upcoming months.

To celebrate the 75th anniversary of the UN and considering the physical constraints due to the COVID-19 situation, the Council tried to come up with innovative ways to celebrate the UN’s birthday in a virtual environment.  A guestbook was created for staff to be able to express their thoughts on how to make the UN a better place, a photo competition is currently underway on the themes of the workplace plus panel discussions will be  organized on topics including the life of young people at the UN, how things have improved or not …… to name just a few.  The Council has also arranged for a one day 20% discount in SAFI for all its loyal dues paying members.