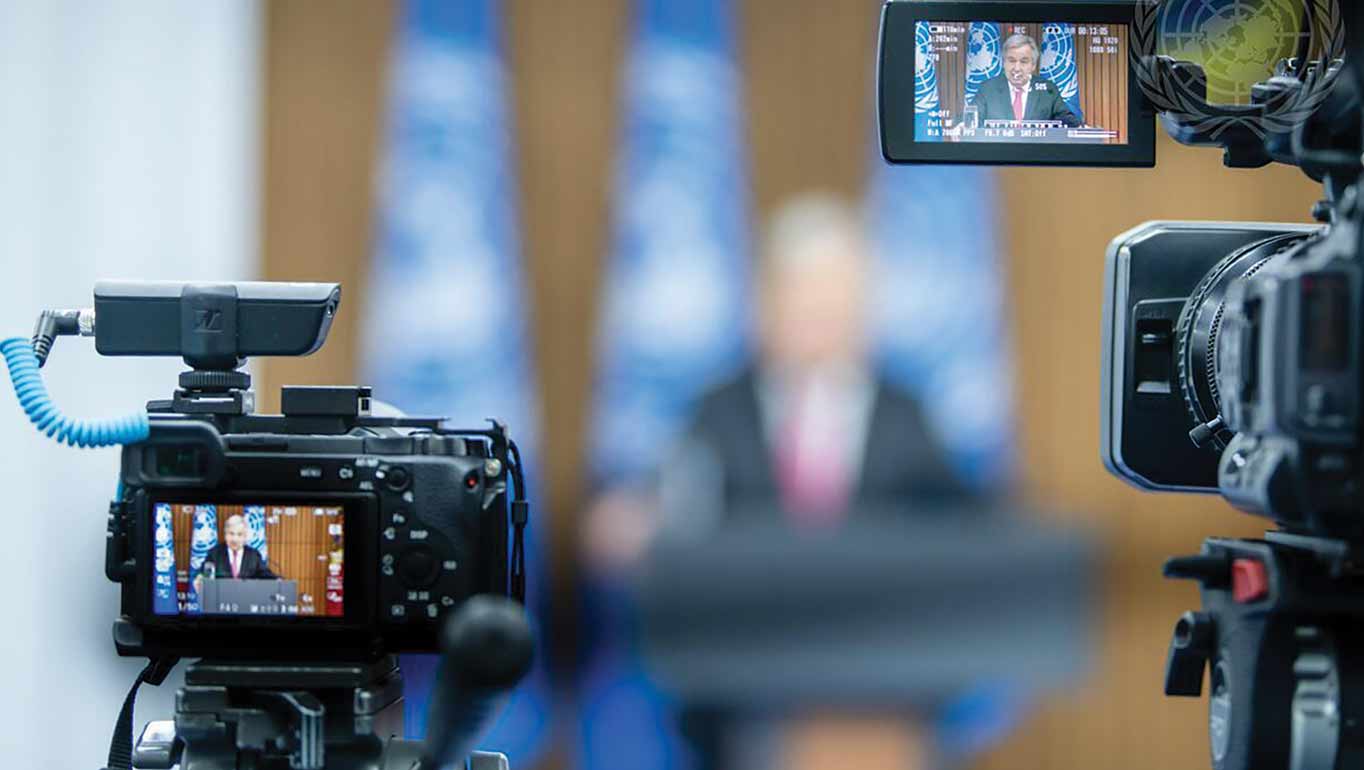 Speaking with the media – how does it work?
UN staff have an important role to play as the face of the organization, but there are some grounds rules to be aware of
By Bettina Gerber and Lara Bethônico de Moura*
1 Oct 2022

The principal voice of the organization is the Secretary-General. He speaks to the media frequently, at Headquarters and when traveling.

This being said, in certain situations, UN staff members may also speak to the press, but there are some key principles and ground rules to be aware of:

The United Nations respects the inviolability of all staff members’ personal views and convictions as well as their right to freedom of expression. However, since UN staff have an important role to play as the face of the organization, they must avoid any action and, in particular, any kind of public pronouncement that may adversely reflect on their status or call into question their duty of integrity, independence and impartiality to the United Nations (See Staff Regulation 1.2 (f)).

Furthermore, the Standards of Conduct for the International Civil Service stipulates under paragraph 9 that (…) “International civil servants do not have the freedom of private persons to take sides or to express their convictions publicly on controversial matters, either individually or as members of a group, irrespective of the medium used. This can mean that, in certain situations, personal views should be expressed only with tact and discretion.”

Tact, discretion, care and good judgment – What is important?

• Under the rules, prior authorization is required to issue statements to the press, radio or other agencies of public information if related to the purposes, activities or interests of the United Nations (See Staff Rule 1.2 (t), Staff Regulation 1.2 (p), ST/AI/2000/13);

• Speak only within your area of competence and responsibility;

• Provide facts, not opinions or comments;

• Do not feel that you have to answer every question, in particular any hypothetical ones;

• Leave sensitive issues to officials who are specifically authorized to speak on them (e.g, the Spokesperson; Heads of Departments), etc.

• Do not presume or pretend to speak for the Secretary-General or characterize his views without his explicit consent.

If a UN official speaks to a journalist, they should normally speak on the record. Sometimes, though, officials specifically authorized to address sensitive issues can give a journalist a deeper understanding of an issue by speaking on background. However, it is very important that the journalist knows on which base the conversation is being conducted:

• On the record: “Everything I say can be attributed to me by name.”

• Not for attribution (on background): “Don’t attribute this to me by name, but rather to a UN official.”

• On deep background: “Use my ideas but not my words; don’t attribute to anyone.”

A few words on Social Media:

A staff member’s activity on personal social media, even when unrelated to official duties, may reflect on the organization and may expose the United Nations to reputational risk.

Thus, all UN staff members should think critically before creating or liking and sharing posts to make sure they communicate in a way that is consistent with their status as international civil servants, the principles of the UN Charter, and the UN Staff Regulations and Staff Rules.

In case of questions, reach out and seek advice from the UN Information Service in Geneva or the Ethics Office at HQ for confidential advice.

* Bettina Gerber is a Legal Officer at HRMS, UNOG. Lara Bethônico de Moura is an intern at HRMS, UNOG.
Read more articles about INSIDE VIEW