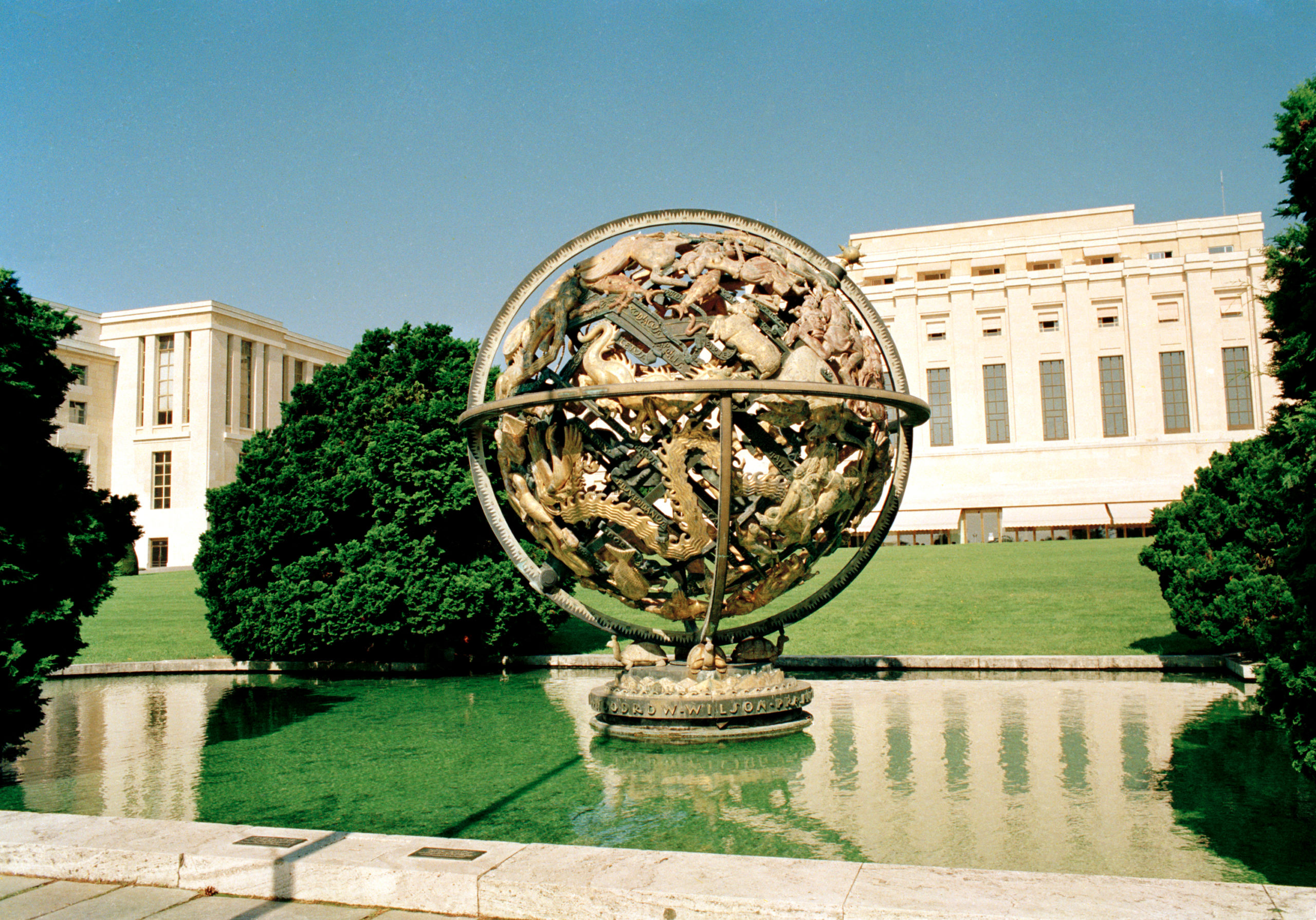 UN Today is following the journey of the Celestial Sphere, from the garden of the Palais des Nations to Florence, where it will be restored by a group of experts.

A symbol of peace born in a time of war

Eighty-one years after it reached the grounds of the Palais des Nations, the Sphere was lifted recently by crane to begin its trip back to Italy, where it was first cast in Florence by the Bruno Bearzi Atelier in 1938. Although it was born as a symbol of life, peace and multilateralism, the Sphere was inaugurated in September 1939, a sad month for human history. The inauguration ceremony planned for the thirtieth session of the League of Nations was cancelled, leaving the new sculpture without visitors and without any form of proper celebration.

Although it was born as a symbol of life, peace and multilateralism, the Sphere was inaugurated in September 1939, a sad month for human history.

The sculpture was the result of over two years of work, started in 1936, by the American sculptor Paul Manship (1885-1966), who had been asked by the Woodrow Wilson Foundation, donor of the project, to advance an idea for a memorial to US President Woodrow Wilson, the founding father of the League of Nations. There is no signature of the author on the Sphere, since Manship sculpted his own profile amongst the constellations instead.

The sculpture is highly symbolic and metaphorical, as Manship was inspired in his design by classic representations of heavenly constellations dating back to Babylonia, Assyria, ancient Greece and Rome. 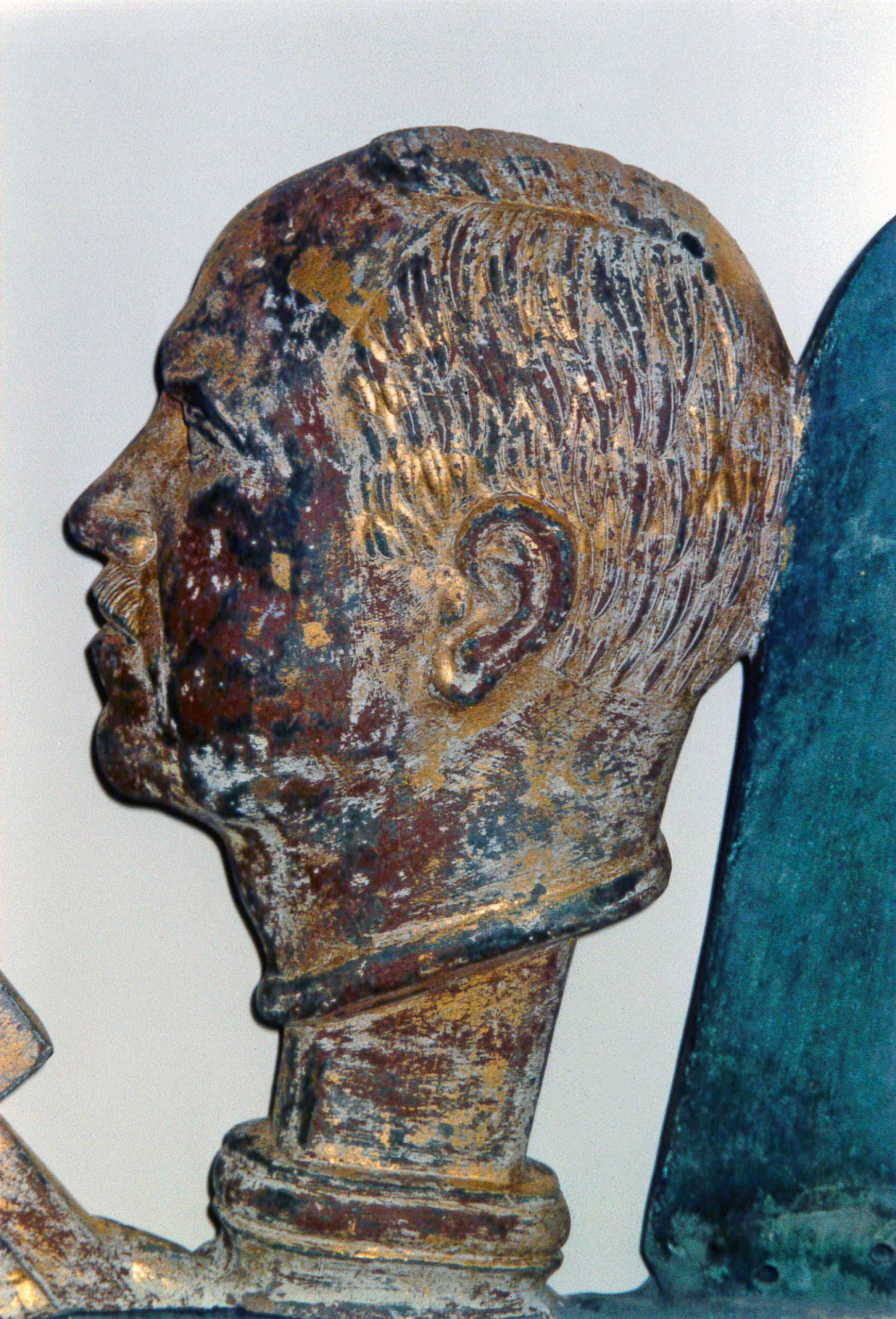 However, defining the Sphere as a “sculpture” is reductive. Although it now appeared as, in the words of the sculptor, “a “harmonious ensemble” of human shaped figures, animals and zodiac signs, it was originally complemented by a rotation and an illumination system, making it de facto the “beacon” of diplomacy, to be seen from far.

Despite the early SOS, it took a long time for the Sphere to be rescued.

A long SOS and rescue operation

The mechanisms allowing movement and light were not used in the time of war, and finally broke in the early 1960s. The broken mechanisms, however, were not the only problems experienced by the Sphere.  As early as 1942 the structure was in need of help. The contractions of the alloy, due to changes of temperature, allowed water into the structure, freezing and cracking the metal. Moreover, the circles carrying the structure were made of iron, a metal easily prone to oxidation and corrosion, especially when exposed to the weather. The constellations were repaired as early as 1942. The shiny chrome-plated golden stars continued to lose their shine, and some pieces had to be replaced as lost. The socle was cracking and sustaining an unstable structure.

Despite the early SOS, it took a long time for the Sphere to be rescued.  While smaller repairs had to be made all along, the Maecena World Patrimony Foundation reports of an earlier attempt in 2000 by the Fine Arts Conservation Inc (FACI) for a comprehensive restoration project. The project, however, never came to completion.

Back to Florence … and back again.

What matters is that, a few years later, an anonymous private donor came forward to invest in the current, thorough conservation programme for the Sphere, covering not only the repair and restoration of the mechanical and artistic parts, but also the cataloguing of its pieces. The exact position of every part was in fact already determined, through a very detailed 3D scanning system using terrestrial photogrammetry and lasers. This new technology was used by Dimensio, the company tasked with the digital rendering, who had previously employed the same technology for the Brunelleschi chapel in Florence.

It is also in Florence that a team of specialized artisans of the Marinelli Ferdinando artistic foundry will renovate the Sphere.  A detailed analysis of the state of the structure will be followed by its repair and the replacement of some worn-out pieces. For instance, iron structures will be replaced by stainless steel, to guarantee durability. 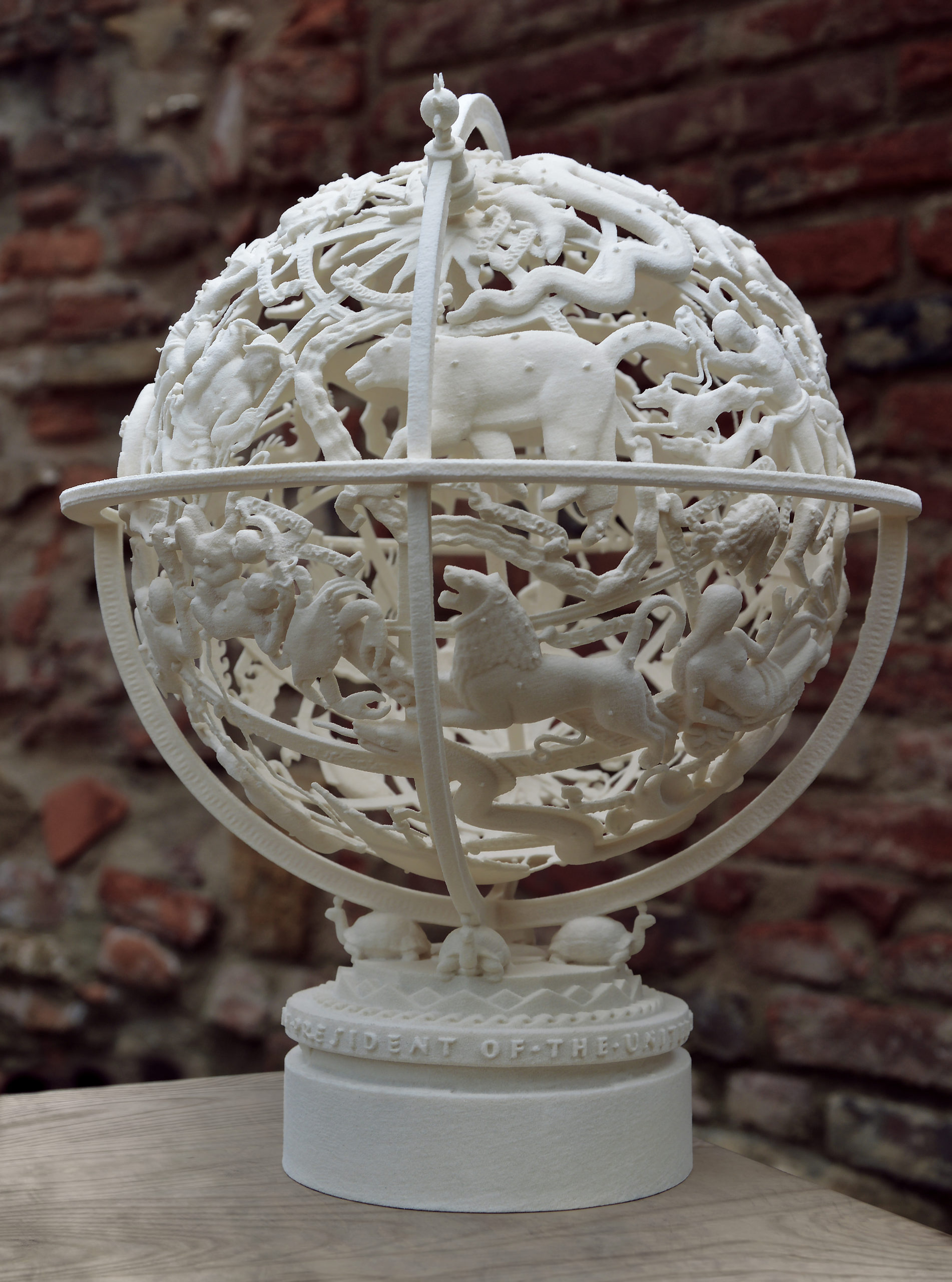 A new rotating mechanism, with a hydraulic motor, will replace the old one. An electric motor will bring back the old lighting system. Art bronze pieces will be sanded (using micro sandblasting techniques) and surfaces will be processed in order to bring back their original shape and grain. Gold leaf gilding will be restored and protected by water-based acrylic resin. The list of work to be undertaken is quite exhaustive and an extremely detailed project implementation plan is set to guide the company and UNOG in the 2020 rescue operation.

Hopes for the future

So, it seems that the SOS warning has finally been received loud and clear, no doubt due to the additional commitment and work of the Facilities Management Section and the Office of the Director General at UNOG. In late 2021, the temporary boarding in the garden with the images of the Sphere will be taken down to leave space for a fully functioning and restored art piece.

In the meantime, we dream of having the Sphere back, all clean, shiny, golden, moving and illuminated and, why not, perhaps sitting on a higher socket, so as to be visible from far, connecting the lights of the celestial constellations to those imperfect but committed humans that, at the Palais and around the world, still work together for the people, the planet and prosperity. 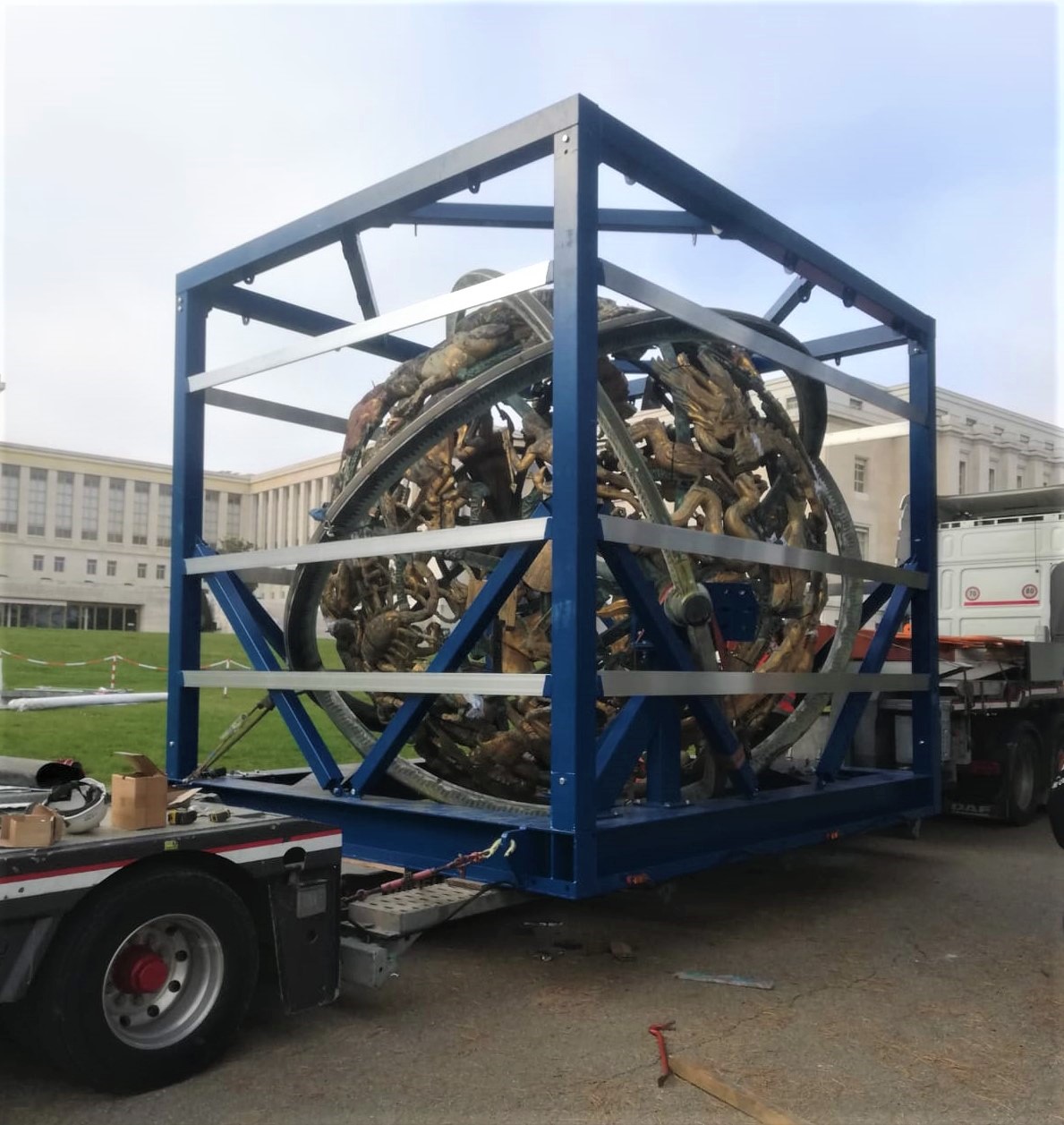 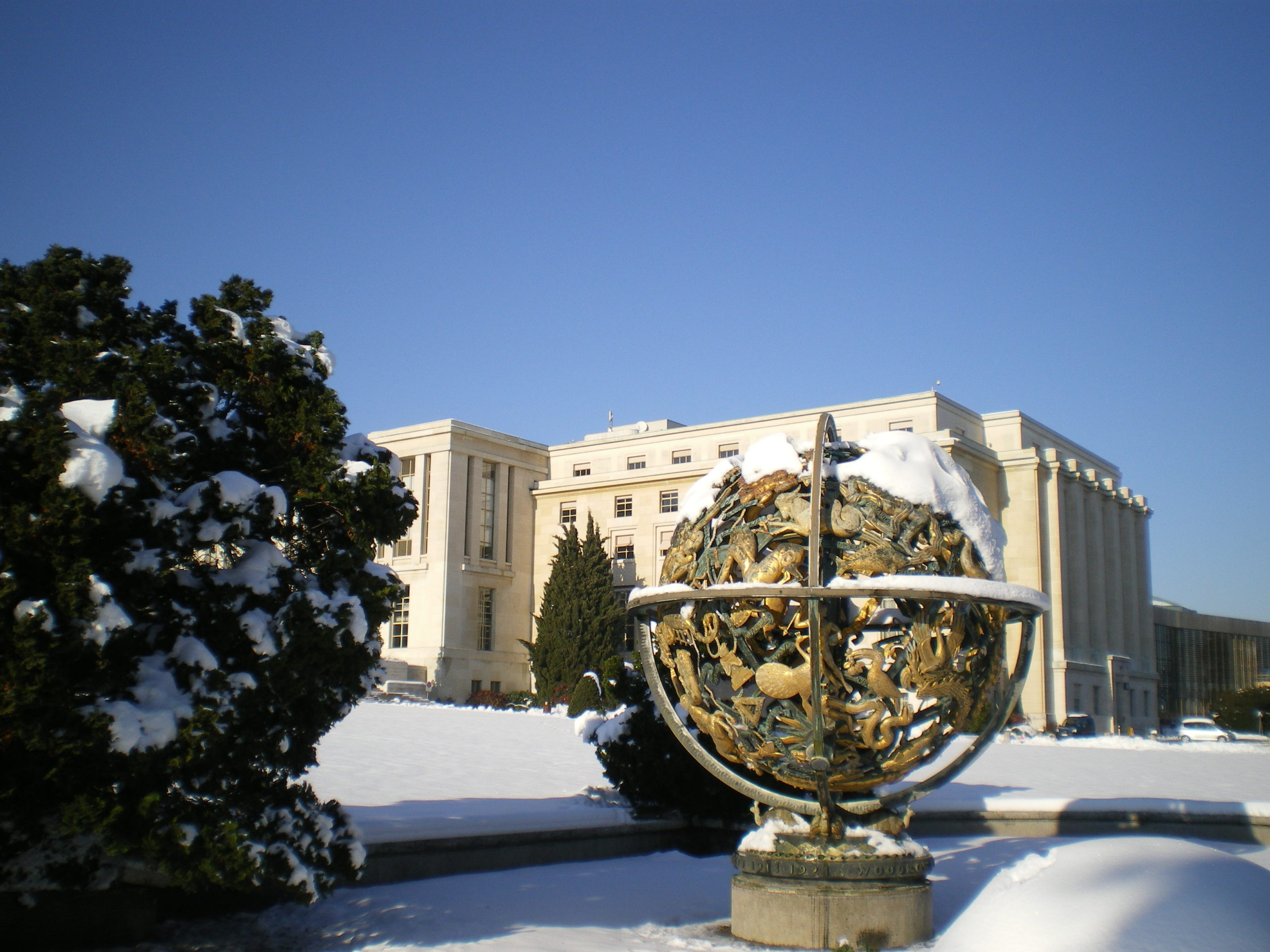