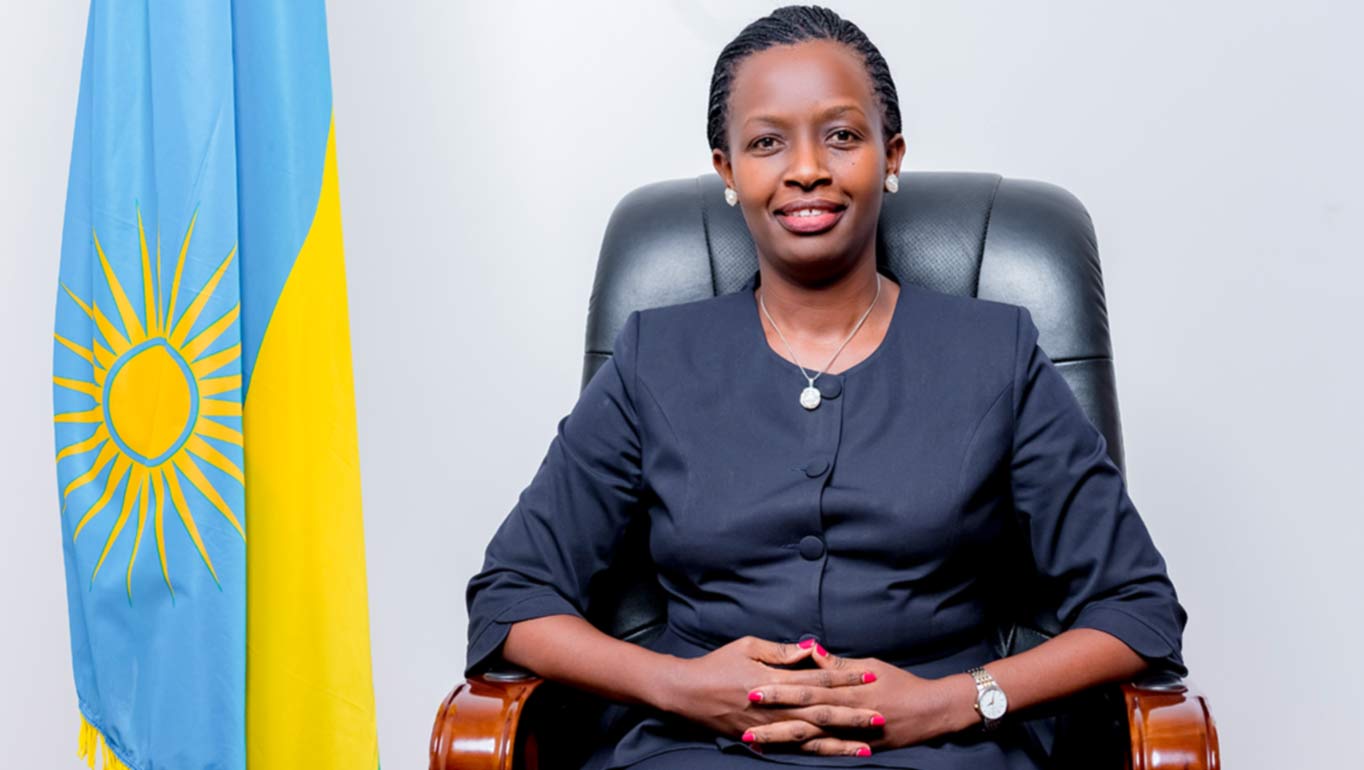 Rwanda, a leading force in Africa
H.E. Marie-Chantal Rwakazina serves as both Permanent Representative of Rwanda to the UN in Geneva and as Ambassador in Switzerland
By Catherine Fiankan-Bokonga*
1 Nov 2021

Madam, what is the advantage to work at the multilateral and bilateral levels at the same time?

Combining the roles of ambassador and permanent representative presents numerous advantages. First, it allows me to engage my bilateral and multilateral counterparts in one place. I have the opportunity to be directly involved in multilateral discussions and debates which gives me a clearer picture of the priorities of other countries when it comes to global and regional matters. Our various partners are learning to know what Rwanda champions, or supports in the global agenda too. Wearing both hats helps to position Rwanda as a bilateral and multilateral strategic partner while more effectively advancing the interests of my country and of the Rwandan people.

Having a Rwandan woman as head of Mission is not exceptional as your country ranks in the top 10 for gender equality in the world. Could you tell us more about the commitment of your government to ensure equal rights for women and men?

Since the end of the 1994 Genocide against the Tutsi, the country has made significant progress in terms of gender equality and women and girls’ empowerment. This has only been possible thanks to a leadership that has been intentional in promoting these principles.

At the national level, gender equality has been a key pillar of the country’s vision, strategies and policies. Our Constitution, emphasizes the principle of gender equality and women’s rights, and provides for a minimum quota of 30% of women in all decision-making positions. In addition to this, other gender-sensitive laws have been enacted including matrimonial regimes, donation and successions, access to land as well as the prevention and repression of Gender-Based Violence (GBV) and criminalization of GBV offenses.

As a result, Rwanda has become a global leader in women’s participation in decision-making positions with 61.3% female members of Parliament and ranked 7th globally in closing gender gaps according to the Global Gender Gap Report, 2021. 55% of cabinet members are women, 51% of female judges and 45.2% of female as members of district councils in local government leadership.

Rwanda also takes its commitments under international conventions and agreements to which it is party to.

Also known as the “Land of Thousand Hills,” your country is famous for extraordinary biodiversity, incredible wildlife, montane rainforests, and national parks. How do you protect your environment and are you impacted by climate change?

Like most countries in the world, Rwanda has been negatively impacted by climate change, which has manifested through drought, floods, and landslides. We recognized early on that tackling the climate crisis was a necessity to build a resilient economy. Therefore, Rwanda has decided to take bold measures to protect the environment.

Plastic bags were banned in 2008 and single-use plastics in 2019. We have reforested 30% of the country and have fostered community-led programs such as “Umuganda”. Every last Saturday morning of the month, Rwandans come together at the village level, and agree on which environment or infrastructure challenge they will address and fix.

On the biodiversity conservation side, we also have several initiatives that involve the local communities. To give an example, the Virunga park’s mountain gorillas are the only great ape species increasing in number all over the world with their official status recently upgraded from critically endangered to endangered.

Rwanda is committed to environment protection and with the support of strong partners, will achieve its ambitious plan detailed in the Paris Agreement’s Nationally Determined Contributions.

Rwanda has made enormous progress in the communication sector, extending internet accessibility, improving infrastructure, integrating ICTs as well as prioritizing digital literacy. Could you share with us the country’s vision?

In the early years of the internet, our government quickly realized the potential of ICT as a driver and enabler of sustainable socio-economic development, especially for a landlocked country with limited natural resources. From there we defined a vision for our country to become a knowledge-based economy and society; and to position Rwanda as a regional and continental ICT hub.

To reach our goal, the government has adopted an ambitious digital agenda articulated in a series of five-year strategies. These strategies support the progressive roll-out of digital infrastructure, with 90% of the country being covered by 3G and 4G, one of the highest rate on the continent. E-governance is also a priority, with close to 100 public services available on “Irembo”, an online one-stop center for e-governance services.

In addition to that, the government has launched a series of innovative partnerships to expand digital literacy and create an infrastructure to support the private sector and technology start-ups.

The health sector has also significantly improved and universal health coverage is one example. How do you make it a reality?

Good governance and decentralization of health services have made possible the implementation of national health strategies and universal health coverage.

While central government focuses on policy formulation, monitoring, capacity building and resource mobilization, health services are decentralized. The network of community health workers has been critical in ensuring citizen awareness and participation in health programs as well as rapidly identifying health problems and referring patients to the relevant services. 90,5% of the Rwandans are covered by a health insurance. This existing system has allowed for Rwanda’s response to COVID-19 to be swift and robust. Our vaccination campaign kicked off in late March this year, and to-date, over 25% of the adult population has been vaccinated, with over 90% in the Capital City.