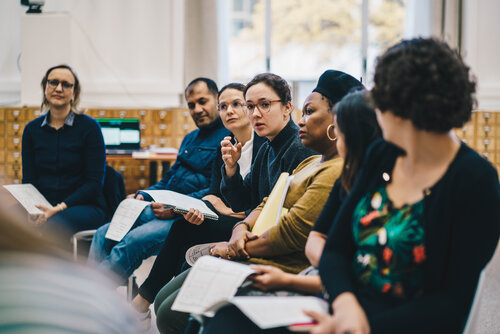 Young UN reflects on progress made and action needed to achieve gender equality in the UN System.

As we enter this important anniversary year and the Decade of Action towards achieving the Sustainable Development Goals, it has never been more important for the UN to practice and embody its principles.

Young UN is a global network of more than 1,700 people working across the UN system in more than 100 countries. We share a common vision of a UN that fully embodies the principles for which it stands.

Due to the advocacy of gender champions – including those from Young UN – and the leadership of key senior officials, the organization has made important progress for improving gender equality within our own ranks. However, much more is needed to improve gender equality and ensure that also within its ranks, the UN “leaves no one behind.”

Though we recognize there is a litany of important topics that need attention, in order to improve gender equality and the experiences of young personnel, the issues of gender parity, family friendly policies and sexual harassment must be thoroughly addressed through structural change.

We welcome the strides made towards achieving gender parity. The Secretary-General launched the System-Wide Strategy on Gender Parity in 2017 and has led by example by reaching gender parity at the top levels of the organization. UN Women published the Enabling Environment Guidelines in support of the strategy with recommendations and examples of good practice throughout the UN system. Using the most recent data available, the 2019 report on the improvement in the status of women in the UN system found that women’s representation in the UN system increased from 38% in 2007 to 44.2% in 2017.

Nevertheless, and of particular importance for Young UN, is that female representation continued to be negatively correlated with seniority, with the greatest gap at non-headquarters locations. Furthermore, the average age of a woman at a P1 position is almost 33 years and at P2-level, it is 37 years. Far too many an early career in the UN involves internships, consultancies and other precarious contract modalities. As highlighted by the Fair Internship Initiative which campaigns for equally accessible internships, reports on the composition of personnel indicate that over two thirds of the interns in the secretariat are women, demonstrating that the UN is perpetuating structural inequalities by relying on unpaid female labour.

We look forward to the implementation of policies for young female staff in the System-Wide Strategy. This includes, for instance, the talent management pilot initiative of 50 staff across the UN system, with a focus on young women from the global south to offer opportunities and experiences. We welcome inter-agency initiatives such as “EMERGE – Programme for Emerging Women Leaders” for staff at the P-3 level and would be delighted to see similar initiatives across the system which include women at more junior levels, General Service staff, as well as consultants and interns.

As Young UN has previously called for, improving gender parity in a sustainable way means supporting young and mid-level staff on a UN career path that is challenging, fulfilling and viable. Improving gender parity means focusing on more than numbers but also ensuring a cross-UN perspective that changes organizational culture in terms of reviewing contract modalities, combating unconscious biases, investing in talent management, and implementing other enabling policies.

Importantly, while there has been some commitment to taking a more inclusive view of gender in some agencies and public statements by the Secretary-General, gender efforts internally should move to be more inclusive of all genders including those with non-binary identities, especially following advocacy from UN Globe which fights for the equality and non-discrimination of LGBTI staff in the UN system and its peacekeeping operations.

An essential part of achieving gender equality is ensuring that family friendly policies are realized in practice. There is a significant drop in women’s representation between P2/P3 levels and P4 level, highlighting the importance of parity efforts at mid-career levels, which often coincide with caregiving.

Equal parental leave has been implemented in some UN agencies such as UNICEF and UNAIDS and we urge others to follow suit. It is essential to ensure that parental leave is compulsory and inclusive of all types of family structures, including single-parent households and LGBTQI+ families. Notably, family leave does not cover staff on consultancy contracts although many young staff are in those types of modalities for years.

Efforts have been made on flexible work arrangement (FWA) policies and the Secretary-General released a promising FWA  bulletin. Challenges remain with implementation. The majority of respondents of Young UN’s Future of Work survey are interested in working from outside the office (87% within and 83% outside their duty station), flextime (82%) or coworking (66%). However, the majority did not have flexible work options available or felt supported by their supervisor. Young UN advocates for approval of FWA requests by default to promote a culture based on performance rather than presenteeism and the expansion of flexible workplace policies to include more options such as flextime and coworking.

In 2018, organizations across the world were shaken by the global #MeToo movement, in which people shared their stories on sexual harassment and abuse of power. The UN was no different. We welcome the steps the organization has taken to address this important issue but asks that more is done.

As a network of young personnel, we know from experience that young personnel are particularly vulnerable to abuse of power. This was brought to the attention of senior officials through the first ‘Safe Space Survey’ which found that interns and consultants (who are likely to be young) were the least likely to be aware of reporting mechanisms.

There has been progress including the creation of a dedicated Chief Executives Board for Coordination (CEB) taskforce which produced a CEB UN Model Policy on addressing sexual harassment  and Code of Conduct for UN Events, and implemented a ClearCheck Database that is being rolled out across the system. The specialist investigation capacity of the Office of Internal Oversight Services (OIOS) has also been strengthened.

However, the recently released Score Card from the UN Feminist Campaign suggests that the momentum for this topic may have waned. It imperative that the UN keeps up the momentum. In particular, there should be increased resources for reporting abuse of power and sexual harassment incidents with an increased victim-centered focus, as well as the monitoring and implementing the model policies created by the CEB.

Conclusion: Leave No One Behind

As we enter this important anniversary year and the Decade of Action towards achieving the Sustainable Development Goals, it has never been more important that the UN practices its principles on achieving gender equality.

Advancing gender equality and the meaningful participation of women in decision-making at all levels are critical to success. We encourage all colleagues eager to contribute to systems change to join Young UN.

We urge all personnel, especially management, to work with young personnel to ensure that the UN “leaves no one behind.”

* Established in 2016, Young UN: Agents for Change is a cross-UN, global and inclusive network working towards a shared vision of a UN that fully embodies the principles it stands for. Young UN recognises the need for genuine change if the UN is to effectively meet the challenges of this century and network members are committed to play their part.
Read more articles about Inside view
Read more articles about Inside view