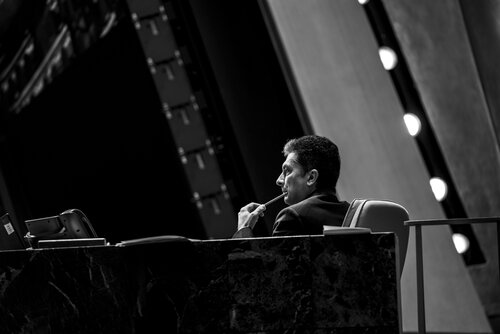 1.      People tend to believe that Gender Champions are women. You are among the few men who have been designated Gender Champion. Can you tell us why it’s important to have men championing gender equality, and what you, in particular, bring to this role?

Secretary-General António Guterres stated in his message for International Women’s Day 2019 that “Gender equality is fundamentally a question of power.”[1] I agree that power dynamics does have a significant role in our quest for gender equality. Gender equality is a matter that concerns us all, regardless of our gender. We are all responsible for providing equal opportunities to people of any gender, ensuring a gender-balanced representation in positions of responsibility and breaking down barriers based on gender stereotypes and unconscious bias. Leading the way towards the achievement of these goals should not depend on our gender.

Senior leaders and managers have a key role to play in contributing to changing the mindsets and cultures in their own organizations with a view to making gender equality the norm. Male Gender Champions can help to spread this important message among peers in traditionally male-dominated networks and environments.

I am committed to maintaining gender parity in my Department, as well as creating a diverse and inclusive workplace for all. To achieve this, I will continue to support initiatives aimed at increasing managers’ accountability, empowering individuals, giving equal opportunities to staff of all gender identities, mitigating bias and fostering a culture of inclusion. I will also continue to raise awareness of the importance of using gender-inclusive language across the six official languages of the United Nations.

2.      The Feminist UN Campaign recently issued its report card assessing the Secretary-General’s progress in building a gender-equitable Organization. The report states that 2019 was a year of incremental progress, frustrated by institutional obstacles. Could you elaborate on these institutional obstacles?

In 2019, the United Nations was facing serious liquidity problems which have carried over to 2020. Some of the measures taken to manage this situation, such as slowing down or freezing the hiring of staff throughout 2019 has made the goal of building a gender-equitable Organization a bit more challenging. With fewer resources available to the Organization, reaching gender parity targets at all levels becomes more difficult as it depends on the ability to fill vacant posts.

Nevertheless, the UN has still managed to make progress. As recently stated by the Secretary-General on 1 January 2020, for the first time in its history, the UN achieved gender parity across the senior-most ranks of full-time Under-and Assistant-Secretaries-General.[2] It has taken the UN 75 years to reach this milestone, which speaks to the need for continuous commitment and dedicated actions on the part of senior management.

In the Department for General Assembly and Conference Management (DGACM), gender parity has been achieved at all levels in all four duty stations thanks to the strong support of its leadership, a solid accountability framework and the measures taken to strengthen the female talent pipeline, among others.

Despite the institutional obstacles we currently face, there is still a lot that we can do to pave the way for a future where defining parity targets is no longer required to increase the representation of women. We can start by focusing on setting the tone for our teams, increasing managers’ responsibility and supporting work environments where people of all gender identities can thrive.

3.      There are some indications that the SG’s Gender Strategy is mainly benefitting female staff from a particular geographic grouping, and largely leaving behind women from the Global South. What should, in your view, be done to address this situation and ensure that the Strategy is truly inclusive?

Gender parity and geographical and regional diversity among UN staff are key elements of the Secretary-General’s overall reforms. They respond to the understanding that the more diverse our workforce, the better we will be able to serve the people of the world.

UN leaders should look at both angles when recruiting and giving opportunities for development to their staff.

In DGACM, we have made efforts in the past years to increase the number of applicants and recruited personnel from less represented regions and countries, particularly among our language staff, as they constitute the highest proportion of staff members in the Department.

Our language staff are recruited through competitive examinations which have been redesigned to make them more accessible and more inclusive. Previously, candidates were required to travel to their capitals or other designated examination centers thus limiting participation from those living in remote areas or smaller countries. The exam is now conducted fully remotely by leveraging communication platforms and proctoring technologies. We have supplemented this by promoting these opportunities through social media and outreach campaigns, some of them targeted to universities and professional associations in underrepresented countries.

These efforts have resulted in a dramatic increase in the number of applicants from under-represented regions and the number of nationalities included in the final list of successful candidates, including from Africa, Latin America and the Caribbean.

The examinations are gender-blind and, historically, the rate of female candidates who have both applied and successfully passed has been very high.

Every UN entity should assess their own specific situation by collecting and analyzing data on the gender and origin of applicants at each step of the recruitment process and devise appropriate strategies to achieve both the gender and the geographic representation goals. It is a challenge to meld the two, but one that could undoubtedly be overcome with the right strategies in place.