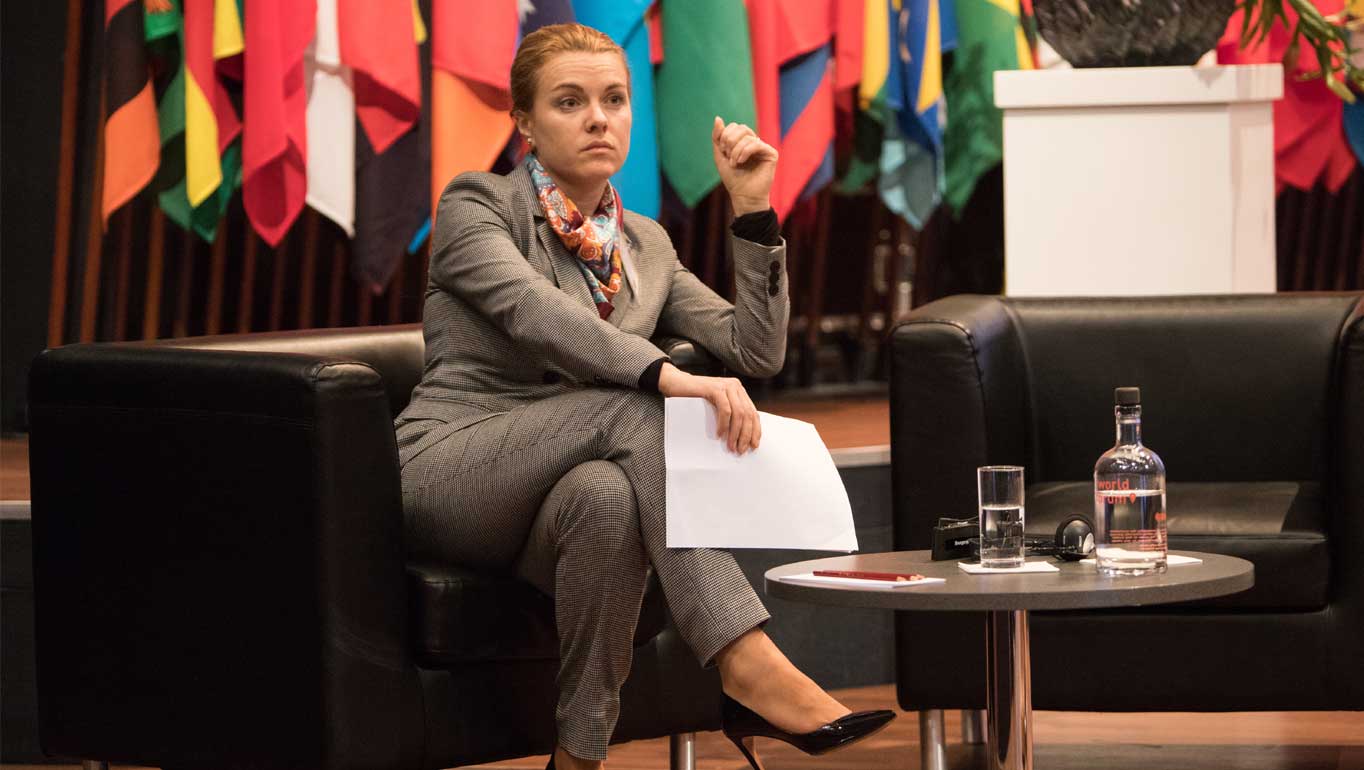 Please tell us briefly about your career, why you joined the diplomatic service and how you were appointed to your current position as Permanent Representative of your country to the UN in Geneva.

I joined the diplomatic service of the Republic of Moldova about 17 years ago, after getting my degree in international law. It was more a fortunate course of events than a long sought-after dream, since initially I saw myself pursuing a different career, that of a lawyer, defending people’s rights in the courts. Yet, because I had received an invitation to apply for a position in the foreign service, I seized the opportunity and have never regretted it.

It is hard work and requires lots of preparation, consistency and usually long hours at your work desk, particularly during the first few years, so it is a lot less colourful than one would imagine in a movie. Nevertheless, through all of these years, working on different issues and in different positions, it was always extremely interesting, challenging and gratifying at the same time.

As a deputy minister, prior to this position, I worked closely with our mission in Geneva to promote Moldova’s interests among the numerous international organizations located here. I can definitely say that the multilateral environment is the one I appreciate the most, and the one where I can be of greatest support to my country.

That is how I managed to be appointed to this position. The bonus is that this has brought me to the very heart of the place where human rights are debated and reviewed, a matter which has been very close to my heart for a very long time.

It is difficult to pinpoint one or even two events that marked my career in a positive sense, since usually once you successfully conclude one project there is another one round the corner, galloping towards you. Of course, there were a few events that might be considered as highlights, but it is unfair to single out one in particular, since even minor events are priceless. It was and it is such a great pleasure and an immense satisfaction when you see the results of the work of your institution or team having a concrete and positive impact in a specific country or region, or even the world.

I do remember the negative ones, however, all too well, and unfortunately, there were too many of them. Signing the books of condolences is a practice or protocol that we follow in cases where tragic events happen in other countries. This was and still is a difficult experience for me.

About two years ago I had to sign a message of condolences in relation to an accident that happened in a public space in a country from our region and claimed the lives of many children and young people. I was devastated, and even struggled to finish the message as tears were running down my face. You ask yourself if it could have been prevented, if we will manage to avert such tragedies in the future… The answers are usually not the ones I like.

Geneva is one of the most international cities in the world. Actually, I would say that it is the most international, not just because of the number of international organizations, NGOs, or diplomatic missions that are located here, but also on account of the range of topics covered, such as peace and security, disarmament, humanitarian action, human rights and migration, labor, health, trade and intellectual property rights, development, and transport to name but a few.

Selecting one or two priorities is indeed a challenge. Of course, I abide by our national work programme with the UN, prioritising the work of the Human Rights Council for example, but International Geneva has its own way of imposing an agenda and dictating priorities.

For instance, during the last year or so our agenda has been dominated by topics such as health, vaccines and medicines. We interact daily with colleagues at WHO, GAVI and other organizations in order to find solutions to the current pandemic. We also work with WTO, WIPO, UNECE and other partners to help our economies recover, whilst keeping trade flows stable and enabling markets to operate in an open, transparent and fair way.

Multitasking is something that missions of small countries have to deal with. It is intense, but extremely rewarding as well.

What are the main aspects of Moldovan cultural heritage that you try to highlight as part of your work as an Ambassador?

Moldova is a small country, but it has an impressive cultural and artistic heritage. I am so honored to be able to show this and share part of it with the international community in Geneva.

Already in September last year, between the lockdowns during the pandemic, we managed to organize an exhibition of traditional Moldovan hand-woven carpets at the Palais des Nations. What is unique about these carpets is not only the manner in which they have been woven for hundreds of years, but also the fact that they are mostly the work of women from rural areas, who have a story to tell through such pieces of art. This is so valuable and I wanted to emphasize this fact. As soon as conditions allow, we will continue to organize similar projects, highlighting the skillful work of Moldovan artisans in producing traditional costumes, paintings and sculptures. Food and wine are also a part of our heritage that I wish to make more people aware of. I would also love to share and show the richness of Moldovan music and draw attention to its famous composers like Eugen Doga, whose waltz has been included by UNESCO in the list of the masterpieces of the 20th century.