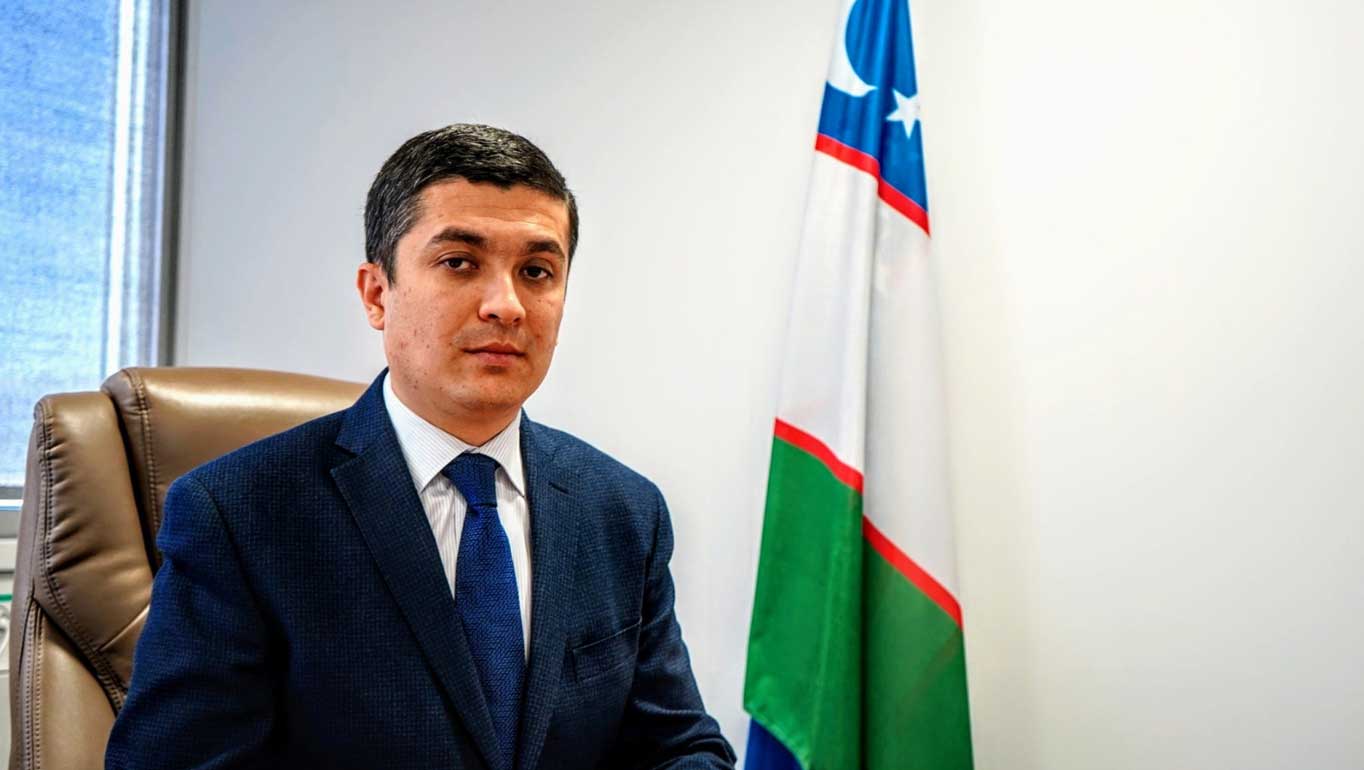 Meet ambassador of Uzbekistan: Ulugbek Lapasov
Ambassador to the Permanent Mission of the Republic of Uzbekistan to the UN Office and other International Organizations in Geneva
By Prisca Chaoui*
1 Jul 2021

Please tell us briefly about your career, why you joined the diplomatic service and how you were appointed to your current position as Permanent representative of your country to the UN in GVA?

Born in Samarkand, whose history goes back several millennia, a city of monumental buildings and majestic past, I have been interested in history since childhood. During the period of various empires, Samarkand served as the capital and received ambassadors from all over the world. It can be seen at the Afrasiab murals, also called the Paintings of the Ambassadors, dated back to the 7th century, and the painting “Amir Timur meets the Spanish Ambassador Ruy Gonzalez de Clavijo” of 14th century, which I discovered visiting the museum with my school.

This interest led me to the University of World Economy and Diplomacy in Tashkent, the first institution in the Central Asia majoring in diplomatic service. To further enhance my knowledge in International Law and Relations I did my master degree at the Université Jean Moulin Lyon 3 as well as special courses at the École nationale d’administration (ENA) in France.

After graduation, I joined the Ministry of Foreign Affairs of Uzbekistan as a desk officer for the EU and NATO. During the past years, I have been assigned to our diplomatic missions in Brussels, Paris and Geneva. In 2018 I was promoted as Permanent Representative of Uzbekistan to the UN Office and other international organizations in Geneva.

It is very difficult to single out one specific from plenty events that happen in Geneva. But as an example, I will probably cite the fact that I was lucky to be part of the Mission during the period of serious transformation that Uzbekistan experienced when the President Shavkat Mirziyoyev took office at the end of 2016.

Since then the cooperation of Uzbekistan with Geneva-based international organizations has drastically improved. I was lucky not only to became a witness, but to be personally involved in a number of “first ever events”. To name some, we organized successfully visits to Uzbekistan of the UNOG Director General, UN High Commissioner for Human Rights, ILO Director General, IOM Director General.

For the first time in our history last year we became a member to the UN Human Rights Council after competitive elections. After quite a long pause of almost 15 years, a regular meeting of the Working Group on Uzbekistan’s accession to the WTO and country-visits of special procedures mandate holders were held.

All of the above was considered essentially unfeasible some 4 years ago.

Our Permanent Representation interacts with numerous United Nations and other international organizations based in Geneva, covering wide range of issues from human rights over economic, trade, development and environment subjects, to security and disarmament.

Committed to the development of mutually beneficial relations with all international partners, Uzbekistan participates actively in the work of the United Nations, considering it as the only universal organization responsible for maintaining international peace and security, as well as for promoting the sustainable development of states in the context of the rapid processes of globalization.

We are closely collaborating with a number Geneva-based international institutions such as OHCHR, WHO, ILO, WIPO, ITU, IOM, UNECE, WTO and others that play an crucial role in achieving the SDGs.

The President of Uzbekistan H.E. Mr. Shavkat Mirziyoyev in his Address at the 46th session of the Human Rights Council in February 2021 put forward a number of initiatives, among them:

– radically increase the role of women in the public, political and business life of the country;

– ensuring the rights of people with special needs;

– protection of rights of the youth;

– to hold together with the OHCHR a Global Forum dedicated to the 10th anniversary of the UN Declaration on Human Rights Education and Training;

– support the proposal by the UN Secretary-General Mr. Antonio Guterres for taking decisive steps to reduce the number of stateless persons.

Besides, as a proud member of the Human Rights Council for 2021-2023 Uzbekistan stand ready to further contribute in ensuring highest human rights standards globally. Uzbekistan is also as one of only two double land-locked countries in the world. That makes the issues of trade and transport connectivity most significant for our Government.

What is Uzbekistan mostly known for?

Uzbekistan is a unique country and its history goes back more than one millennium. This land is historically well known as the cradle of the Eastern Renaissance.

Mirzo Ulugbek (prominent ruler, astronomer and mathematician who build Samarkand Observatory in 15th century), Zakhiriddin Babur (founder of the Mughal Empire in India and whose descendants built Taj-Mahal), Abu Ali ibn Sina (known in the West as Avicenna), Abu Raikhan Beruni (father of modern geodesy, and the first anthropologist), Al-Khorezmi (founder of algebra and whose name gave rise to the term “algorithm”) and others made invaluable contribution to the development of global science and culture.

Moreover, some of the most remarkable places to visit in Uzbekistan are the triad of the Great Silk Road – cities of Samarkand, Bukhara and Khiva. All three are a part of UNESCO World Heritage. Uzbekistan has introduced a visa-free regime for citizens of 86 states and a simplified visa regime for citizens of 57 states. We are not proud only of our history, but of the modern progress in the “New Uzbekistan”. For instance, UK’s “The Economist” recognized Uzbekistan as the country of the year – the state where reforms have been carried out at the fastest pace since 2017.