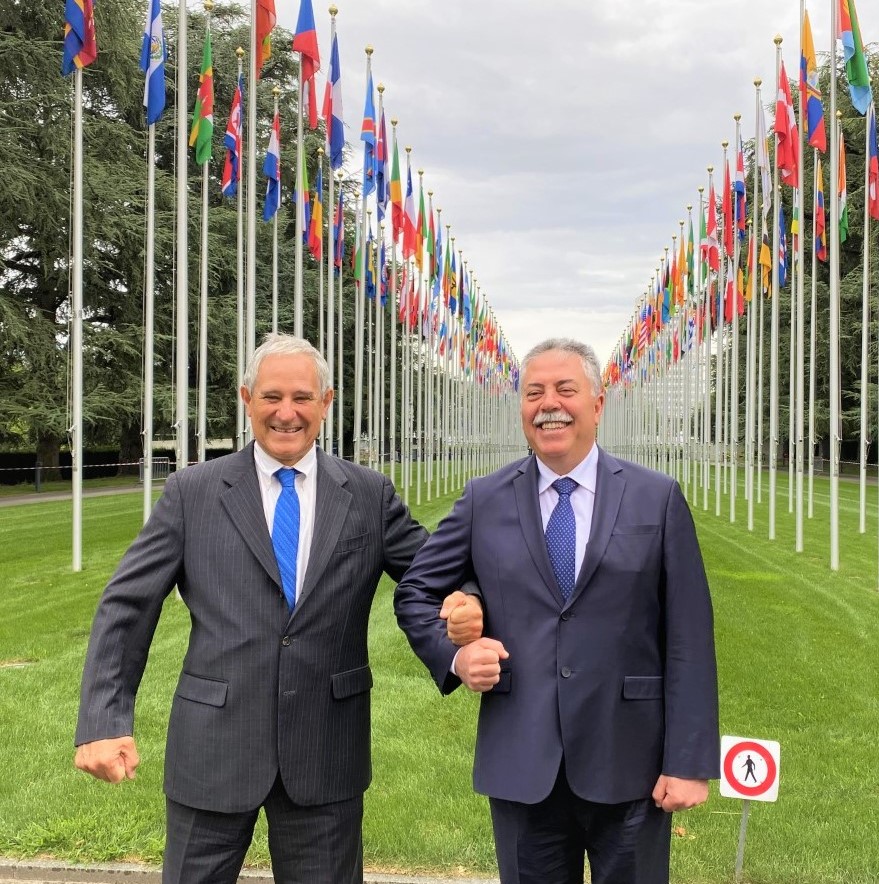 International Geneva
Interview with His Excellency Ambassador Sabri Bachtobji, Permanent Representative of Tunisia and His Excellency Ambassador François Rivasseau, Permanent Representative of France on the Security Council resolution 2532 (2020), initiated by Tunisia and France on COVID-19 and Global Ceasefire.
By Alex Mejia*
16 Sep 2020

We would like to share with our readers an interview on the unanimous adoption by the Security Council, on 1 July 2020, of Resolution 2532 expressing its support for the Secretary-General’s appeal for a global ceasefire to help unite efforts to fight COVID-19 and its repercussions on vulnerable groups in conflict zones, upon the initiative of Tunisia and France.

UN Today’s Editor-in-Chief, Alex Mejia: It is an honour for our magazine to interview you both on this historic achievement, UNSC resolution 2532/2020. Sponsored by both of your Member States, in the middle of an unprecedented pandemic, this resolution shows the power of multilateral diplomacy. We would like to know how did this effort begin.

Ambassador Sabri Bachtobji: As you might know, along with the five permanent members, the Security Council of the United Nations includes temporary members that hold their seats on a rotating basis, according to geographic regions. Since 1st January 2020, Tunisia is among the non-permanent members. As a strong defender of the values of multilateralism, international solidarity and through its responsibility as an active member of the Security Council, my country, in partnership with France and over a period of four months, maintained consultations within the Security Council to achieve the adoption of this historic resolution.

The President of the Republic of Tunisia has increased contacts with a large number of Heads of State to unify their vision around the common responsibility to address the impact of the pandemic on peace and security in the world. This is about social and humanitarian situations and conflicts that will worsen and affect millions of people, not just a health crisis. This led our government and our diplomatic team to co-sponsor this historic resolution.

The resolution focuses on a global ceasefire, a general and immediate cessation of hostilities and humanitarian pause but does not apply to military operations against Islamic State in Iraq and the Levant (ISIL/Daesh), Al-Qaida and other Council-designated terrorist groups. We would like to hear how France perceives the relationship between conflict and poverty, hostilities, and development.

Ambassador François Rivasseau: The answer is obvious; one of the essential and major conditions for development and economic growth is peace and security for the economic actors involved. Based on this premise, security has been included four years ago in the European Union’ North-South strategies for development and cooperation.

I would like to add to the vision and comments of my colleague and friend the Ambassador of Tunisia, that France had since the beginning two main objectives. The first one is to support Secretary-General António Guterres’ call for a global ceasefire. Because in a context of a pandemic, the needs for health measures (such as providing medical equipment, medicines and masks, build emergency hospitals, etc.) have increased and if there is a conflict, all logistics would be compromised and would accelerate the spread of the pandemic. The virus would remain in war zones, and therefore spread to other regions. Hence the need for an urgent and immediate ceasefire sponsored by a mandate from the highest, most authoritative possible level, which is the Security Council.  Secondly, we have witnessed with the greatest concern that the pandemic was dividing the international community between two camps championed by the United Stated and China. In this light, we were humbly but strongly aware of the need to unite the world against the pandemic. Maybe we did not realize how difficult this would be, but we hoped that a resolution from the Security Council would bring together all member states for a global duty.

Our Secretary-General António Guterres appealed for a Global Ceasefire the 23rd of March, but it was only on the 1st of July that the Security Council adopted a resolution. What happened during all those months? And what do you think would happen after the 90 days cessation of hostilities?

Ambassador Sabri Bachtobji: It was very important for Tunisia to have a global response plan, and there were different ways of approaching this. Also, we have to remember that an international humanitarian ceasefire cannot be reached without the commitment of all. In point 7 of the resolution, we acknowledged the negative impact of the pandemic on women and girls, children, refugees, internally displaced persons, older persons and persons with disabilities, and call for concrete actions to minimize this impact and ensure the full, equal and meaningful participation of women and youth in the development and implementation of an adequate and sustainable response to the pandemic. Some sessions here in Geneva, were an appeal for collective international awareness, as we wanted to have a holistic comprehensive resolution that indeed created a momentum to cease all hostilities.

Now what will happen? I think that we will continue to be successful on this call for a prolonged ceasefire, despite the divergence of views among member states, policies, or points of view. The global emergency will remain, and the global effort will continue as well. The WHO will continue to be central to the ongoing efforts of the entire international community. And I am convinced that in September we will see a major additional financial effort from all sides in support of global health.

It is true that fighting COVID-19 brings along other negative aspects, because if we put all our efforts into this alone, we miss out on other major problems. The fight against poverty and the need to maintain global peace remain priorities of the United Nations, and all of its member states. We must not think of the COVID-19 as an isolated phenomenon, but as part of a set of problems. And this will be more obvious in the future. There will be another World Health Assembly in November, and we will see how this momentum led by Tunisia and France will continue. We need to continue this virtuous process.

Ambassador Bachtobji, you arrived in Geneva last March and are relatively new to the diplomatic community in this city. From that fresh perspective, how do you see the role of the International Geneva on a global level?

Ambassador Sabri Bachtobji: The work that we do here is very important for the visibility and global awareness for many reasons. The magic of the multilateral work is that the small steps between states are the ones that allow the big steps on a global scale. Today, with the global challenges, the invisible part of the iceberg is the translation of all the common efforts. Without solidarity, without commitment of the international community, and without the relevant use of multilateralism, we will not be able to bring together and aggregate these individual voices towards a common goal.

We are on this great ship of Humanity, and the classic dichotomy of “rich world”, “poor world” doesn’t make any sense today. We see it now with the crisis of Covid-19 that the response has to be global, Multilateralism is the art of making things possible.

Our magazine UN Today was founded in 1949 as UN Special by staff members at the Palais des Nations. This year, the staff is also celebrating the UN 75th Anniversary. In this context, can you send a message to them Ambassador Rivasseau?

Ambassador François Rivasseau: This is my third term in Geneva, and I would like to share two main messages with the UN staff members:

First, be proud of what you do! Because the work done in Geneva is one the most important in the multilateral area. When someone asks what is the purpose of our presence in Geneva, I simply show them my mobile phone and say “…this mobile was made possible thanks to the ITU (International Telecommunication Union), and the ILO (International Labour Organization) set labour rights and statutes for the workers who made it, and the materials and components were made available thanks to the WTO (World Trade Organization). On it, you can check the weather thanks to the WMO (World Meteorological Organization), and so on and so on…”. Geneva is the everyday practical multilateralism that actually works. And to be sustainable into the future, we need to have a common interest that unfold from bottom to top, with UN staff members at the centre of the multilateral process. So be proud, because the work done here is the most important in the long term to maintain the multilateral system.

Secondly, what you do is vital. In the end, this crisis will reveal a fact: we will see a distinction between what can be done remotely and what cannot be done remotely. Many things will have to be simplified and that is what I am experiencing in my daily work. To demonstrate the essential nature of the work done for the international community here in Geneva, the staff must know that their presence, just like doctors, nurses, teachers and firemen, etc. is vital for the survival of the international community. Without the support provided by the UN staff members in Geneva, it will simply not be possible to work in a multilateral architecture the way we know it. And I would like to express my admiration for the work being done during this pandemic.
After all, we are all here to serve and serving sometimes involves taking some risks.