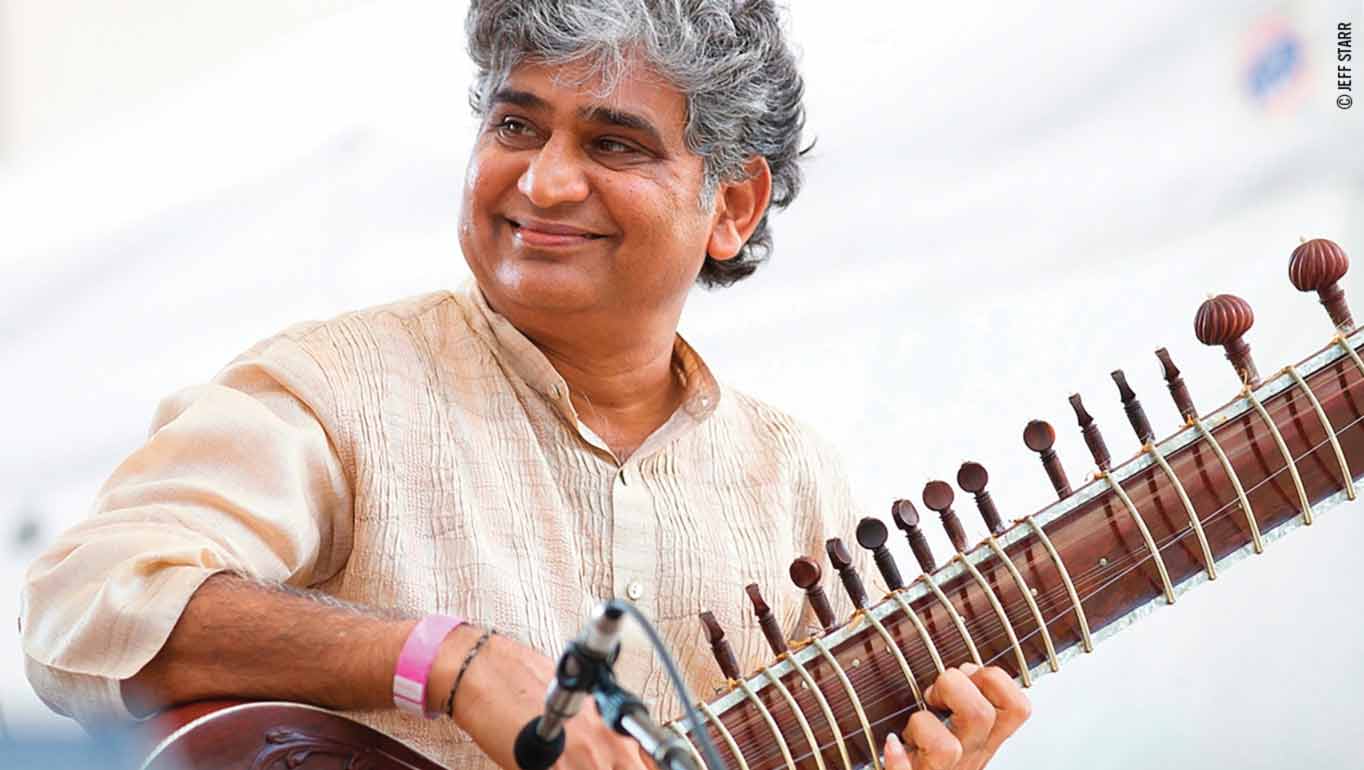 Ikhlaq Hussain: a sitar maestro
His personal mission is to preserve and disseminate his rich musical heritage through concerts, performances, and teaching
By Julián Ginzo*
2 Mar 2022

He arrived in Geneva from New York City, following his wife who got a job with one of the international organizations, only months before the pandemic hit. As a result, he only had a few opportunities to give recitals. The solo concert that had been rescheduled from May 2020 to December 2021 with the Indian Association Geneva had to be postponed, yet again, due to the current wave of COVID-19 cases.

Ikhlaq’s personal mission is embedded in his heritage and history. He was not new to migration and relocation. His parents were born in Old Delhi, India, and migrated after the Partition to Karachi, Pakistan. Ikhlaq’s father, the eminent late

Ustad Imdad Hussain, devoted his musical life to playing the sitar. He was recommended for UNESCO’s “National Living Treasure” for his life’s work in keeping the tradition of classical music and the Delhi Gharana alive in Pakistan.

Ikhlaq Hussain is a sitar virtuoso from a centuries-long line of influential musicians of the Delhi Gharana school, dating back to the early 13th century. Though his ancestors became famous for creating the first compositions and technique of playing the tabla, his grandfather became a well-known sarangi performer and teacher, and Ikhlaq’s father chose to become a sitar performer.

Today, besides him, there are almost no other family members either in India or in Pakistan who continue the rich musical heritage. Famed oncologist and author Dr. Siddhartha Mukherjee has said, “Ikhlaq Hussain seems to have music in his genes, in his DNA, and he uses it as a magical, mystical form of communication with his audience.” Ikhlaq Hussain plays in the Gayaki Ang style, reproducing the nuance of the human voice, perhaps the most difficult form of sitar playing. Indian classical music, similar to Western classical music, requires lifelong dedication and commitment. For him, music is his life’s devotion.

Now, back to the story of migration and relocation. Ikhlaq was in his late twenties when the then Consul General of India in Karachi spotted his talent and offered him a scholarship through the Indian Council for Cultural Relations, to study under the legendary sitar master late Pandit Ravi Shankar. As a result, he moved to Delhi from Karachi, where he lived for two years and became a disciple of the world-famous sitar maestro.

He relived the dreams of his parents, who like many others after the traumatic partition of 1947, longed for revisiting their birth places, their relatives on the other side of the border, their cherished memories, the happy days. For many, including his parents, that dream was never fulfilled in their lifetimes.

When Ikhlaq arrived in New York City from Karachi, it was a difficult time. It was only two weeks after the tragic 9/11 incident. At that time in NYC, Muslim immigrants and citizens were even afraid to walk outside because of the hate crimes and strict surveillance. He would say that it is all a matter of destiny. In 2002, he was invited to give peace concerts in New York City’s Central Park for 20,000 people, as well as at MIT and Harvard University in Cambridge, Massachusetts. In 2006, he received the green card (immigrant visa) based on his extraordinary ability in music, and later became a US citizen.

He had another successful 18 years in the USA where he became known as a teacher of Indian classical sitar and continued to give performances. Just to mention a few achievements: in 2014 he was an Artist in Residence at Shangri La, Hawaii (DDFIA), in 2015 Ikhlaq performed at the Lincoln Center Out of Doors, and in 2016, at the Storm King Art Center as part of the Masters of Indian Music series presented by the World Music Institute. He had yearly ‘sold out’ shows at the Rubin Museum of Art in New York City between 2015 and 2018. Ikhlaq was invited to pay tribute to his Guruji Pandit Ravi Shankar and performed at the Maverick Concert Hall in August 2019 with Steve Gorn and Samir Chatterjee.

After his performance at the Lincoln Center, the audience was invited to ask questions. While the guests were still in awe and deeply moved from the spiritual musical experience, the first question shocked many: the gentleman asked the organizers why they had not found an Indian musician to perform Indian classical music. Ikhlaq’s answer was according to his Sufi tradition: “We are all one and music has no boundaries.” Now that he lives in Geneva, the city of peace, he wishes to realize his personal mission to create peace through his music. Ikhlaq cannot wait to give sitar performances to the city.