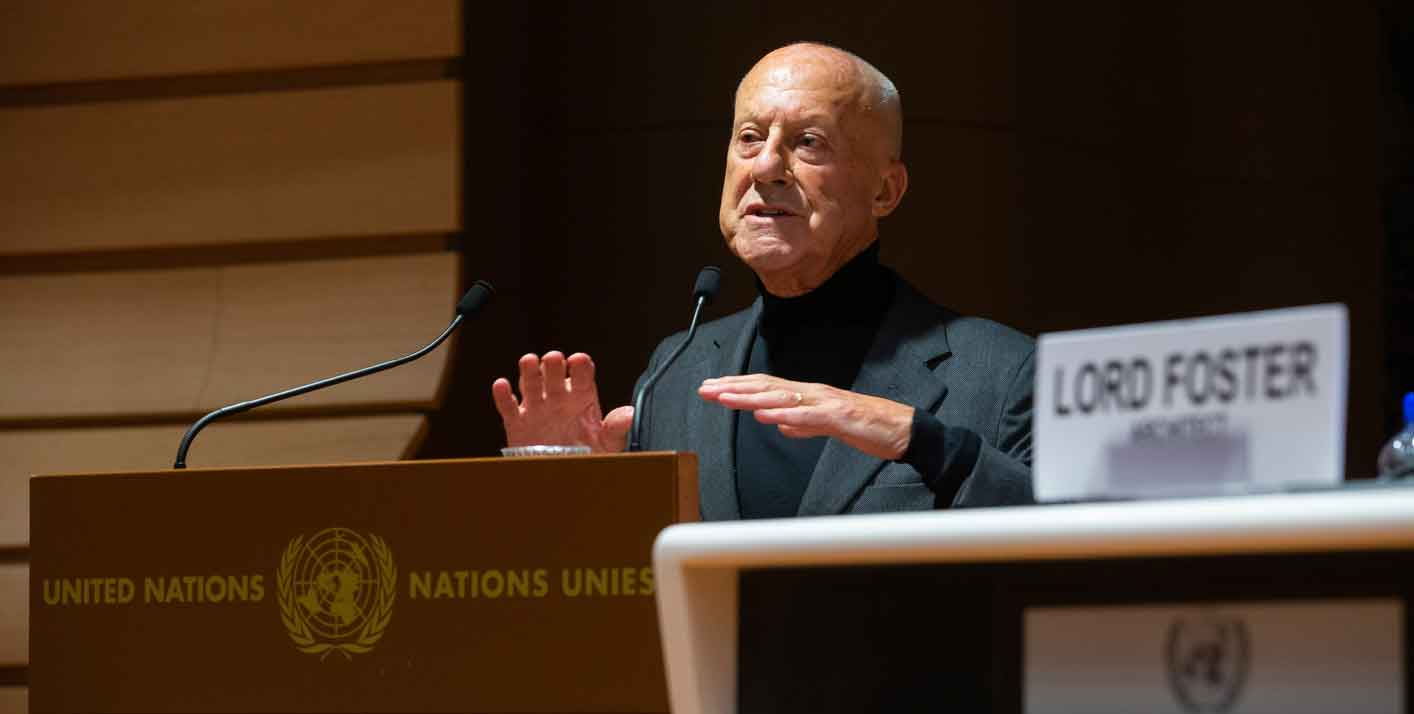 From the Pandemic to the League of Cities

An interview with Lord Foster, Architect, Founder and Executive Chairman of Foster + Partners and President of the Norman Foster Foundation On 6 October Lord Foster opened the first UN Forum of Mayors at the Palais des Nations, with an inspirational and optimistic speech on how COVID-19, and pandemics in general, have shaped our cities, […]

An interview with Lord Foster, Architect, Founder and Executive Chairman of Foster + Partners and President of the Norman Foster Foundation

On 6 October Lord Foster opened the first UN Forum of Mayors at the Palais des Nations, with an inspirational and optimistic speech on how COVID-19, and pandemics in general, have shaped our cities, often accelerating positive transformations. UNToday had the opportunity and honour to interview Lord Foster and ask him three questions on his work and thoughts, which always have the power to shape cities and inspire minds.

Dear Lord Foster, you are one of the most prolific, renowned and iconic architects of all time. Your buildings are all over the globe and have become symbols of cities like London, Nur-Sultan, Milan, Frankfurt, New York, Beijing and many, many more. Which one of your buildings do you think has had the biggest impact on the surrounding city and why?

I am often asked that question about London. And my answer, interestingly, is never a building. I usually invoke the power of the transformation of Trafalgar Square. The impact of closing one side of that square was to convert, what was an island within the busy roads of central London, into a new public space, now famous for large gatherings of celebration and, indeed, protest. I talk about the regenerating effect of the Millennium Bridge, the way that it has brought a new prosperity to a traditionally poor area of London, connecting the two contrasting communities across the River Thames. I talk about the Great Court of the British Museum which created a dramatic indoor public space out by rediscovering a courtyard from the past. But it is an urban space, publicly accessible space too. These examples, along with the Reichstag in Berlin, are about public space, and creating social magnets. Arguably, they have far more influence on the quality of life in a city than the individual buildings themselves. So that was also a theme in today’s conference, the power of public space.

…And the Reichstag has a symbolic meaning with its concept of transparent governance, and that is very powerful.

Creating a space for the public above the politicians who answer to them was deliberate, but there was more to the project than that. The transformation of the Reichstag as the seat of government for a newly reunited Germany was rooted in several related issues – a new relationship between society and parliament through a high degree of public access, the integration of history and art with a manifesto of clean energy – zero carbon and waste.   Art in the form of site-specific paintings and sculpture were integrated throughout the public and civic spaces and the new building was publicly launched with a symbolic wrapping and unwrapping by Jeanne-Claude and Christo.  So yes, I think the power of the history of a building can be as significant as the architecture itself or the art that occupies its spaces – both public and private.

The second question is Covid-related, as expected. Covid-19 shook heavily the economics and societies of countries and cities. The UN says that this should be seen as an opportunity to build back better. What would be the ideal city to come out of the ashes of this crisis and what should be the three priorities for city administrations and administrators, therefore mayors, to build back better?

Historical precedent shows that the cities have the opportunity to be transformed to being safer, more beautiful, quieter, cleaner, healthier – greener in the most literal sense. It is an opportunity to rediscover space from a previous age. There are trends that already exist, and the pandemic is accelerating and magnifying them. Those trends are towards less space for cars and more space for people. So, the potential is through mobility, through changing work patterns, through new roles for industry and culture to transform the city for the better.

“Historical precedent shows that the cities have the opportunity to be transformed to being safer, more beautiful, quieter, cleaner, healthier – greener in the most literal sense.”

As I mentioned, the UN is celebrating its 75th anniversary this year, and this has been a rather unusual anniversary, as you can imagine. In a world that is more and more urbanized and may have more unpredictable events coming its way, how would you envisage the United Nations of the future? 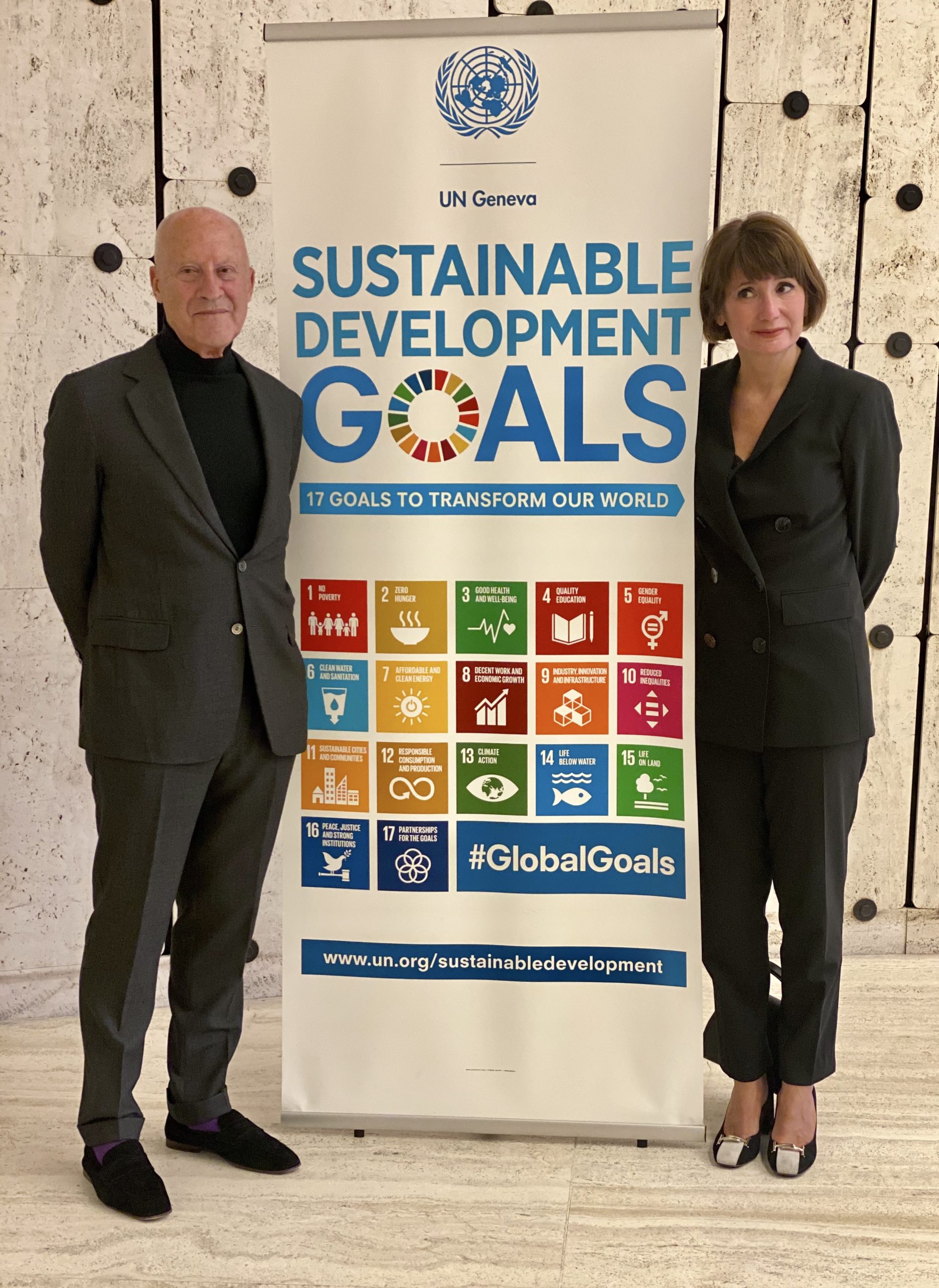 Lord Foster, Architect, Founder and Executive Chairman of Foster + Partners and President of the Norman Foster Foundation
* Paola Deda is the Director of the Forests, Land and Housing Division at The United Nations Economic Commission for Europe (UNECE).
Read more articles about LEISURE