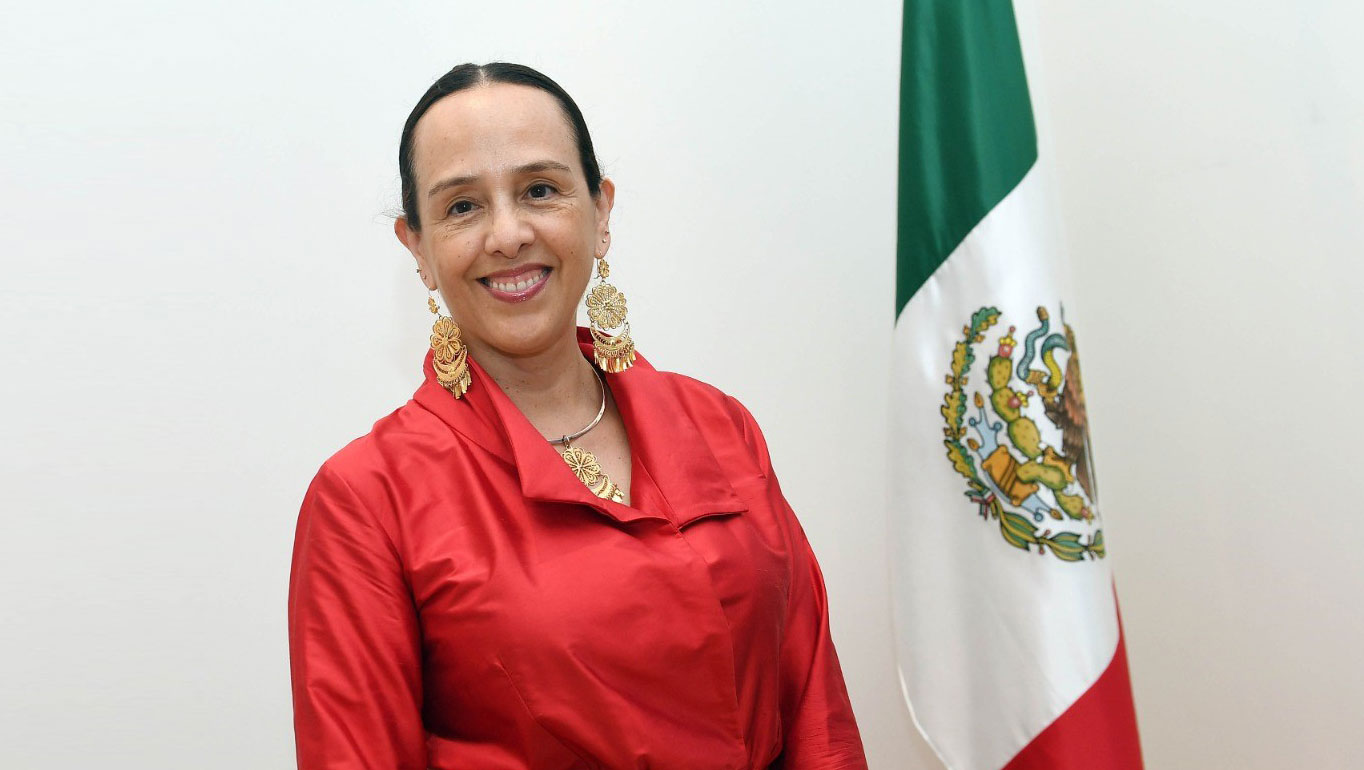 Why did you join the diplomatic service?

Since early childhood, my family fostered my passion to discover new places and cultures. I would spend hours looking at colored photographs collected from random places around the world. I got a bachelor’s degree in Public Administration and Political Science at the National Autonomous University of Mexico. After a brief period in which I joined a professional contemporary dance company, I decided to become a member of the Mexican Foreign Service in order to represent and promote my country. I got a job at the Ministry of Foreign Affairs and took the entry exams in 1991. Twenty-seven years later, I was granted the rank of Ambassador of Mexico by Presidential Decree.

The first highlight was joining the Mexican Foreign Service! During the preparatory process for the World Summit on Sustainable Development (2002), I had the opportunity to negotiate, on behalf of Mexico, the Johannesburg Plan of Action. It was this process that has marked my career, in such a relevant issue: achieving sustainable development.

I treasure the ceremony of the Cry of Independence in the Plaza Saint Jaume, to commemorate Mexico’s Bicentennial of Independence back in 2010, when I was in Barcelona assigned as Consul at the Consulate General of Mexico. Along with the Mayor of Barcelona, in front of five thousand people, mostly Mexicans, I headed the ceremony accompanied by an escort of Mexican children honoring the flag.

As Deputy in 2015 at the Mexican Mission to the EU and the Embassy to Belgium and Luxembourg, I had the opportunity to engage on the ALCUE Summit, a coalition of 63 countries formed by the 28 countries of the EU at the time, and the 33 countries of Latin America and the Caribbean. Likewise, I was involved in the negotiation of the terms of reference that laid the groundwork for updating the Global Agreement between Mexico and the EU.

As General Director of American Regional Organizations at the ministry of Foreign Affairs, I served as Mexico’s National Coordinator in important organizations and institutions such as ECLAC, the Pacific Alliance and the Ibero-American Summit.

From 2017 to early February 2022, I was Ambassador of Mexico to the United Arab Emirates. I established a platform for collaboration between both countries in different areas. Under the leadership of the Vice Minister Ms. Martha Delgado Peralta, I coordinated the organization of a Mexican pavilion at the Dubai World Expo 2020, for which we won a Gold Award for the best pavilion. This experience reinforced my belief that culture is a powerful tool to build bridges of understanding between nations.

Throughout my career, I have worked on the rights of persons with disabilities within the Mexican Foreign Ministry and abroad, an issue that constitutes a life mission, and with which I hope to contribute with my personal experience for the present and new generations of parents who have children with disabilities. And naturally, one of the high points is my appointment as Ambassador, Permanent Representative to the United Nations and International Organizations in Geneva. It has been the greatest honor.

What are the priorities of Mexico’s agenda in Geneva?

As permanent representative to the 36 international organizations based in Geneva, I will promote my delegation’s actions seeking consensus and concrete results within the numerous issues of the UN agenda, including: telecommunications, intellectual property, health, labor, human rights, arms control and environment, among others. Mexico maintains solid relations with all international organizations and some of them have become particularly important in the wake of the COVID-19 pandemic (WHO) or the crisis in Ukraine (UNHCR, ICRC and Human Rights Council).

My work program also contemplates the need to globally disseminate the work of the organizations that make up the United Nations system, in order to generate greater interest on the part of civil society and thus strengthen multilateralism. I also consider it important to address issues such as youth, indigenous communities, the rights of persons with disabilities, and the need to reinforce gender mainstreaming in the work of all international organizations.

Mexico has 33 cultural heritage sites recognized by UNESCO. How does this continue to impact tourism, and to what extent is the younger generation attached to this heritage?

Mexico has the honor of having the largest number of sites registered as ‘Cultural Heritage of Humanity’ in the American continent. Additionally, seven traditions and celebrations are catalogued as ‘Intangible Cultural Heritage,’ among them Mexican gastronomy. These sites and traditions do have an influence on the presence of national and foreign visitors, particularly in consolidated tourist areas such as the Yucatan Peninsula.

In 2020, Mexico was the third-most visited country in the world and we hope that this will increase, while ensuring the preservation of our heritage. Naturally, youth has an essential role not only in the preservation and dissemination of Mexican cultural heritage, but also in issues such as environmental sustainability, and we hope to keep them engaged.