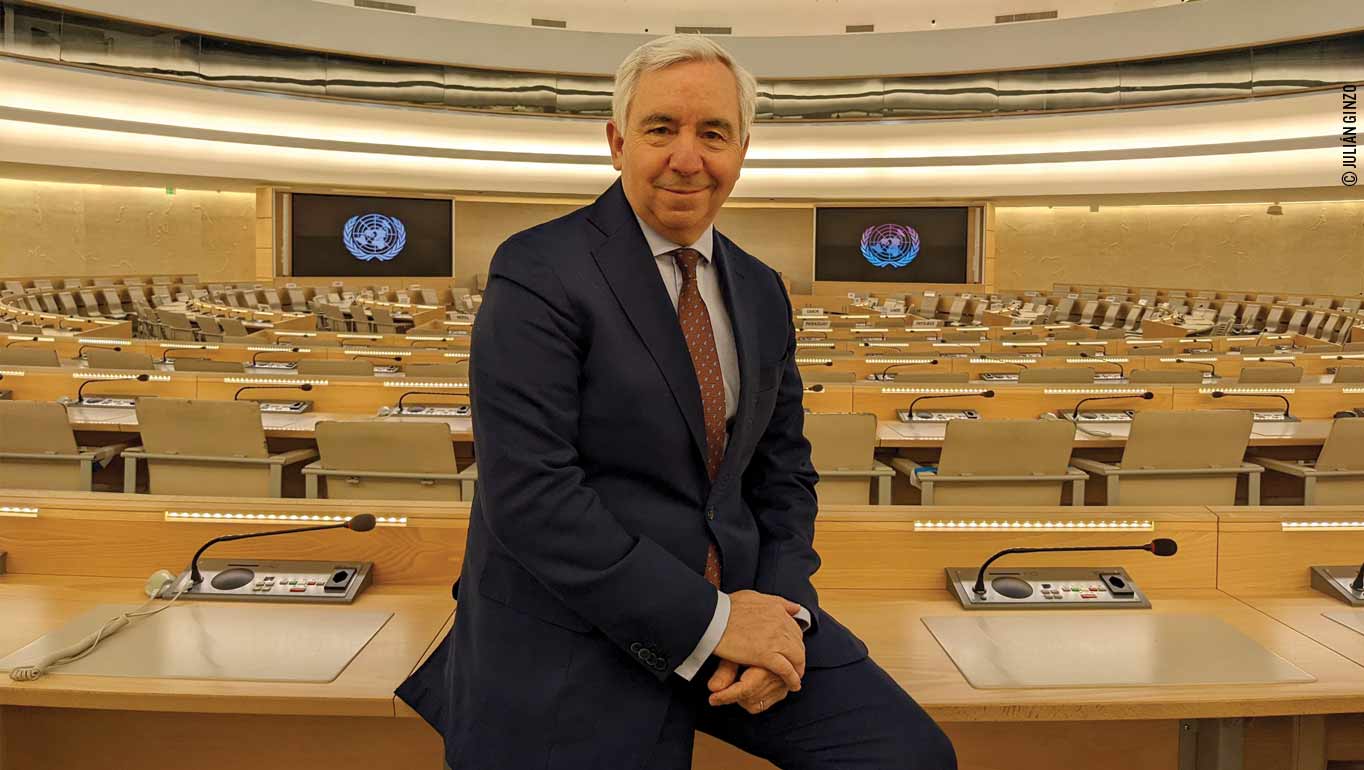 What is the human rights agenda for this year?
Federico Villegas, elected President of the Human Rights Council, tells us about himself and his priorities
By Julián Ginzo*
1 Feb 2022

Please tell us briefly about your career, why you joined the diplomatic service, and how you were appointed to your current position as Permanent Representative of your country to the UN in Geneva.

I am a lawyer from the University of Rosario, Argentina. I entered the Foreign Service of my country in 1993. I have a Masters in Liberal Studies from Georgetown University and I specialised in International Human Rights Law in New College, Oxford University, and the International Institute of Human Rights in Strasbourg, France. I was a U.N. Disarmament Fellow in 1994, and that is when I came to Geneva for the first time.

When I was posted at the Foreign Ministry in my country I was first in charge of disarmament, and at a later stage I was appointed twice as Director General of Human Rights. Overseas, I was posted at the Permanent Mission of Argentina to the Organization of American States in Washington D.C. (1995-2003), and to the Representation to Mercosur and ALADI (Latin American Integration Association) in Montevideo (2008-2012). And, from 2016 to 2020 I was Ambassador to Mozambique, where I opened the Embassy. Since June 2020 I am the Permanent Representative of Argentina to all the international organizations based in Geneva.

I think I became a diplomat because I am from a small city in the north of Argentina, and since I was a teenager I wanted to travel the world. But when I was 17 years old I had the possibility of living in the United States for a year as an exchange student, and then I realized that not only did I want to travel the world but, in particular, I wanted to represent my country. That is how I discovered I wanted to be a diplomat.

Can you share with us an event (positive or negative) that has marked your career, and explain why?

In 2001, I was posted to Washington D.C. and the terrorist attacks of 9/11 not only marked and changed our daily life forever, but also they presented a tremendous challenge to me as a diplomat: in trying to understand what had happened and why, and also which type of world would appear in the aftermath.

A whole new foreign policy with new ideas was needed for every country of all regions – negotiations and debates around human rights, nation building, cultural relativism, understanding terrorism and its root causes, security, etc. A game changer for diplomats worldwide, especially for Argentina, since we suffered two tragic terrorist attacks before 9/11.

You have recently been elected President of the Human Right Council (HRC). What are your top priorities for 2022?

My top priorities are to establish a platform at the Council that would allow a constructive dialogue and understanding among members. To know better our positions, discuss our common interests and respect our diversity, but with the aim of building together consensus for the improvement of human rights worldwide. The increasing politicization of the Council, and the consequent polarization in the debates, prevent us from listening to each other. The HRC should be a place of uniting, not of division.

A second priority will be to improve the role of the HRC in establishing a systematic and worldwide matrix of technical cooperation on different areas of human rights, fostering South-South cooperation and Triangular Cooperation, based on the challenges for the full enjoyment of human rights in each country, following on the results of the Universal Periodic Review. Within this framework, special attention should be given to the countries that are undergoing technical assistance under item 19.

We have to ensure that this assistance shows real improvements in the human rights situation of the citizens, so that other countries start realizing the benefits of engaging with the HRC mechanisms in a constructive manner in order to improve their human rights situation. A third priority will be to have a significant improvement in the role of the HRC in conflict prevention and post-conflict reconstruction, to help establish human rights norms and institutions as a way to prevent conflicts, as well as after conflicts occur, to avoid their recurrence. Human Rights is the best guarantee of non-repetition of conflicts.