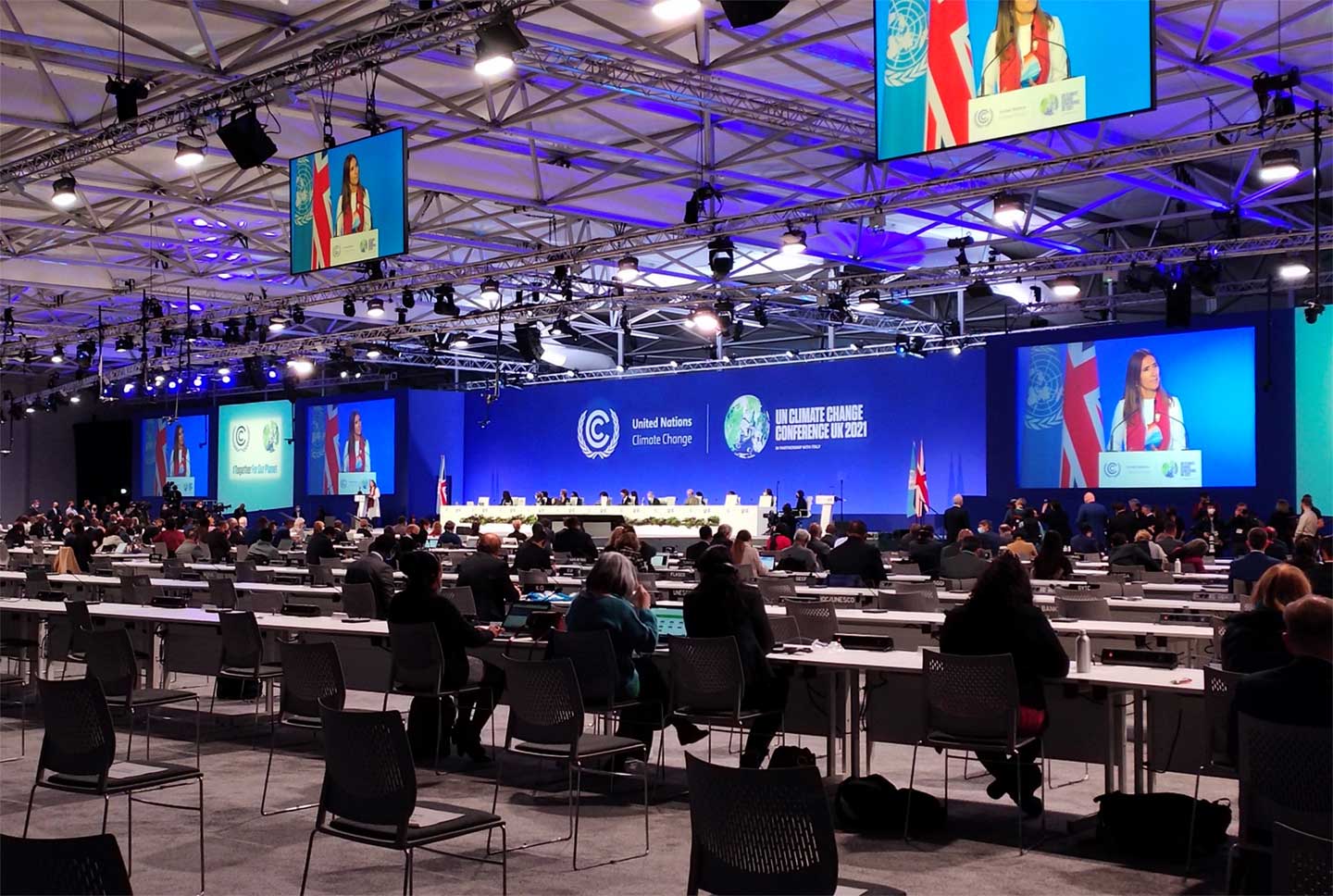 COP 26 through the eyes of a Chinese translator
As always, COP 26 was both an exciting and a stressful period for translators
By Jianjun Chen*
13 Dec 2021

The United Nations Conference on Climate Change in Glasgow (commonly known as COP 26) concluded on 12 November 2021, with the successful adoption of the Glasgow Climate Pact. This was my ninth COP since I joined the United Nations Office at Geneva in 2012. As always, it was both an exciting and a stressful period for translators.

Exciting because, although all the topics that we translate at UN Geneva are important in their own way, no other subject attracts as much media attention as climate change. Almost all the major media outlets covered the negotiations in Glasgow in real time, including on social media. Sometimes we read a news story about the negotiations, and soon enough it was reflected in our documents; at other times, our translations were directly cited by the press. It was thrilling to see the impact of our translations in such a concrete and visible way. At the same time, it was quite stressful because the documents were often highly technical, the deadlines always tight, the workload predictably unpredictable – everything depended on the progress of the negotiations. On top of all that, there were night shifts, standby teams and weekend overtime. Overall, it was two incredibly intensive weeks.

The translation of climate change documents into Chinese is particularly challenging, for several reasons.

First, it is such an up-to-date and ever-evolving topic and new expressions keep popping up. Anyone who follows the news about climate change will be no stranger to “carbon neutrality”, “net zero”, “climate resilience”, “nationally determined contributions”, “pre-2030 ambition” and so on. When such terms made their debut in our documents, there was usually no readily available translation in Chinese and so we had to invent these expressions in our own language. Often, a word-for-word or literal translation will sound strange or even incomprehensible to native ears, especially the first few times it is used, while a more liberal or explanatory translation has the advantage of being easily understood, but risks being too wordy and may not fit for certain contexts, such as the title of a document or the name of an initiative. Understandably, it is always a struggle! Time and again, what we coined at the UN was later widely accepted in China and thus became mainstream; however, there were also some rare cases where we adopted an explanatory translation and then, years later, the literal translation gained the upper hand or even became a buzzword in the Chinese press.

Third, climate change documents are characterized by notoriously long sentences. They are already difficult to understand and even trickier to translate, especially because Chinese syntax is drastically different from English. Lacking grammatical inflections or declensions commonly found in European languages, Chinese is very rigid in terms of word order and a tiny change may alter the meaning of a sentence altogether. Hence, we must understand not only every word and every phrase, but the complex relationships between the different elements in these lengthy sentences, in order to know how to organize them correctly.

Fourth, climate change has become a top priority for China, which is evidenced by the many initiatives it has launched in this area, the most recent being the U.S.-China Joint Glasgow Declaration on Enhancing Climate Action in the 2020s, which was issued two days before the conclusion of the COP 26. We UN translators obviously do not work for the Chinese government; it is nonetheless one of our main clients and we must take into consideration the expressions it uses in its official policy documents and, whenever possible, ensure terminological consistency between the official documents of the UN and those of the Chinese government. For this reason, we must closely follow the latest developments in China in this field, especially from a terminological point of view.

Despite all the challenges elaborated above, I feel proud to be part of the UN process on climate change. It is a privilege and an honour to be able to make my contribution, however insignificant, to the collective human endeavour to find a solution to climate change and ultimately overcome this existential crisis.

* Jianjun Chen is a Chinese reviser at UNOG and also a member of the Languages Service Sectoral Assembly (LSSA) Bureau.
Read more articles about INSIDE VIEW