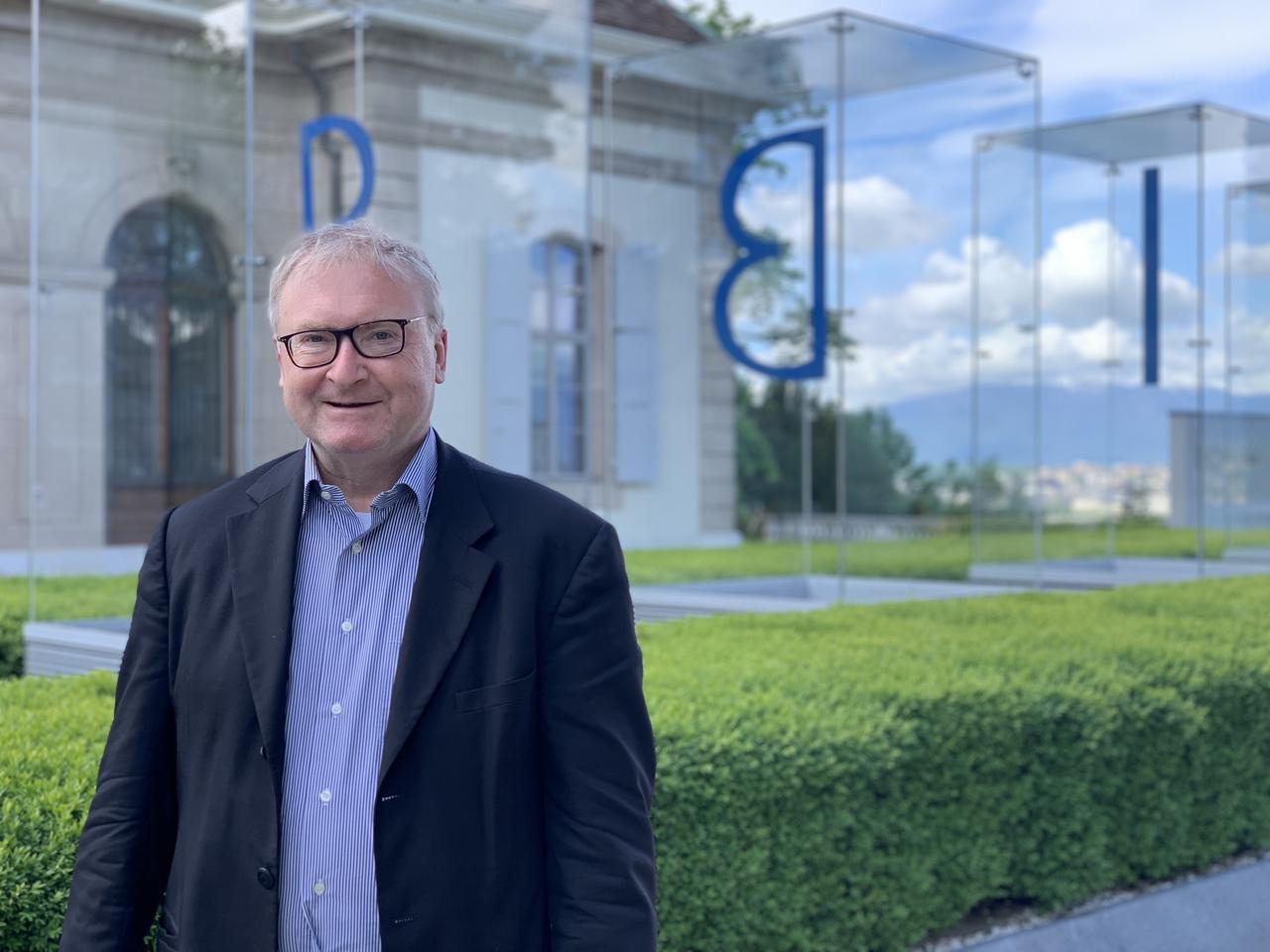 Bodmer Foundation’s Berchtold: Our city is filled with museums – and International Geneva has something to do with it
The Martin Bodmer Foundation, a UNESCO World Heritage Site, boasts an unobstructed view of international Geneva from its hilltop perch in the commune of Cologny from where it welcomes book-lovers and other discerning visitors to its museum and library.
By Kyra Dupont*
26 May 2021

Its director, Jacques Berchtold, who also heads the Geneva Association of Museums and Art Centres (AMCAG), explains how the right bank of Geneva has nothing to envy its elder sister, the left bank, in terms of cultural offerings and perspectives.

What does the public of International Geneva mean to the Fondation Martin Bodmer?

Alongside schools, Genevans, “Colognots” [residents of Cologny], and Swiss, the International Geneva public represents a very important proportion of our audience and are quality visitors. As a preeminent [cultural] centre in Geneva, our institution welcomes prestigious guests. Kofi Annan liked to come here. We have received the former president of the European Commission José Manuel Barroso several times, Al Gore on his way down from Davos, the royal family of Belgium following their winter sports holiday, or the President of Portugal, Marcelo Rebelo de Sousa, in a special session to see our three copies of the first edition of Camoes’ Lusiades, the great Portuguese heritage text.

UN Geneva director general Tatiana Valovaya was proud to take delegations to see the temporary exhibition, War and Peace, that took place between 2019 and 2020 and which probably best met the vocation and interests of the Canton of Geneva’s International Geneva service and also of the Federal Department of Foreign Affairs. A true plea in favour of multilateralism and the role played by Geneva in international peace efforts, it was also an opportunity to show the Tolstoy War and Peace manuscripts that Russia unveiled for the first time in its history.

Would you say that the Martin Bodmer Foundation echoes the vocation for peace that Geneva has had since the founding of the Red Cross?

That’s right. In fact, the most prestigious document in the War and Peace exhibition from a diplomatic point of view was a 4450-year-old clay peg: the first peace treaty in history between two Mesopotamian cities that decided not to wage war against each other. As the world is not perfect, they joined forces to wage war against others…

The Martin Bodmer Foundation almost enjoys the status of a diplomatic mission. In what ways does it serve as a sort of neutral zone?

The presence of international organisations and the support of all the UN country ambassadors help us a lot because they can testify to the trust that unites us. The French diplomatic archives, for example, have lent us documents that never usually leave France in confidence. Within the framework of War and Peace, once again, we organised three days of colloquiums in favour of the right of the child, where specialists from the UN and humanitarian associations came to debate.

We also displayed the first charters that enshrined in international law the rights of the child and that were lent by the UN and the International Committee of the Red Cross. These documents were shown in connection with documents from our collection. On the theme of a childhood shattered by war, the first edition of Anne Frank’s Diary was displayed alongside the first edition of Primo Lévi’s If this is a Man.

You also organise many commemorations, including that of Jorge Luis Borges, the famous Argentine author who is buried in Geneva’s Cemetery of Kings…

With the support of the State Council of the Canton of Geneva and the Argentine permanent mission to the UN, we did indeed celebrate the 30th anniversary of his death [in 2016]. His widow Maria Kodama came from Argentina. We organised five conferences on Borges and published a book on the two cities that structured his mental and literary landscape: Geneva and Buenos Aires. These events had a snowball effect. Maria Kodama had only partially seen the autograph manuscripts of Borges that he had left in Geneva. The diplomatic network allows the support of cultural events linked to different countries. This year, it is the 700th anniversary of the death of Dante with the Italian mission and Napoleon with France. Other years it was Johann Wolfgang von Goethe with the French and German missions and Miguel de Cervantes with Spain.

As president of AMCAG in charge of developing the city’s cultural strategy, what are you doing for the international public?

Museums are archipelagos that function independently…however, we do agree on common national events such as the Night of the Museums or events [organised by] major international bodies such as the International Council of Museums (ICOM). In 2020, its International Committee for Documentation (CIDOC) was due to meet in Geneva to discuss topics such as provenance and restitution, restoration, the future of digitisation, the revolution in cataloguing, etc. The event was held online because of Covid. We coordinated to host smaller groups and there was quite good solidarity displayed between the museums in Geneva. The prestige of the European Museum of the Year Award awarded in 2017 to the Museum of Ethnography reflects on all of us.

Is Geneva different from the rest of Switzerland in the amount of money it spends on culture and its 30 museums?

No city in the world has so many museums per inhabitant. The offer is exceptional. Museums and culture are an asset, in addition to Geneva’s harbour, the view of the Alps and Mont Blanc, the CGN boat trip, and the fondue at the Armures restaurant.

In addition to our close collaboration with the Department of Social Cohesion and the DIP (we organise 300 school visits per year for the Martin Bodmer Foundation Museum alone), we also work with the Geneva Tourism & Congress Foundation. Traditionally, Geneva has been considered as a base for alpine skiing or for international organisations. But at the beginning of 2020, its director, Adrien Genier, surrounded by twenty or so prominent Geneva cultural players, organised a roadshow for the media, tour operators and cultural tourism managers in Madrid, London and Paris to promote Geneva’s excellence as a cultural destination. With Covid, tourism has suffered enormously. But if international tourists are coming much less – Geneva hotels lost 68 per cent of their overnight stays in 2020 – Geneva Tourism has enormously developed the idea of Geneva as a cultural destination for the Swiss public who were entitled to travel. Swiss overnight stays have increased by 27 per cent.

What are the emblematic masterpieces of Geneva and what should you not miss when you are an expatriate here for a few years?

Of the 150,000 documents in the Martin Bodmer Foundation, a third are worth naming. On our walls, the Gutenberg Bible is a must-see. Konrad Witz’s Miraculous Fishing is the greatest masterpiece in the Museum of Art and History, while Miquel Barceló’s frescoes in the Human Rights Room of the Palais des Nations are considered the “Sistine Chapel” of the UN. But also the revolutionary scenography of the Museum of Ethnography and its treasures; the Ariana, which is the most beautiful museum of porcelain in Switzerland if one is interested in it, and its masterpieces from Japan and China that cannot be seen anywhere else; the Baur Foundation; the most beautiful masks of the world’s primitive cultures at Barbier-Mueller. The International Museum of the Reformation does more than navel-gaze at Protestantism and brings this religion, historically closely associated with Geneva, into contact with other faiths. Geneva often hosts exceptional temporary exhibitions.

There is a lot of cultural offer on the left bank and the right bank is less provided, why?

Historically, the old town is more on the left bank with a very dense network of museums. Geneva Tourism offers cultural trails that you can visit on foot. On the opposite side, [you find] Saint Gervais, the more popular districts, but everything changes depending on the sunshine. There are some magnificent patrician houses. Cologny developed late when Geneva decided to use these large plots of land on the right bank to build the railway station, the airport and the network of international organisations. The right bank compensates for this by the presence of international institutions, but also the Ariana Museum and the Gustave Revilliod Park. All of this constitutes a fabric of museums that is attractive to the international tourist. A traveller from far away knows Geneva as the headquarters of the Red Cross, the UN and the WHO, which offer guided tours.

So the left bank would rather embody the spirit of the native Genevans who live in their own backyard and the right bank the spirit of Geneva, which stems from this Genevan spirit, but which radiates at the international level?

Yes, the left bank would like to remain more conservative. It is populated by families who have often been established in Geneva for a long time and who love their heritage and do not want it to be altered. It is easier to experiment with bold ideas on the right bank. I am a committed supporter of the realisation of the Cité de la Musique and I fear a timid and conservative vote. But it would be a necessary and profitable investment. It would be an opportunity to present a cultural offer that would make a difference with our direct rivals around us: Lausanne, Lyon, Grenoble. On our left bank, the first factor taken into account is the integrity of a heritage that we understand must be preserved and not distorted. But the most striking museums, such as Louvres-Lens or the Mucem in Marseille, are museums that need to breathe deeply and benefit from a sort of clean slate from the start. There will always be a tree that it is a shame to cut down, a piece of a house with a wall built in the 18th or 17th century. In order to make something new, we have to accept to mourn the loss of beautiful things from the past and trust in the artists, architects and creators who are contemporary to us.

Currently at Fondation Martin Bodmer: Masks and Theatre, the first exhibition devoted exclusively to the theatre.

This article was originally published by Geneva Solutions

* Kyra Dupont Troubetzkoy has two masters in international relations and journalism. She has worked as a reporter for the written press, radio and television in several countries. She headed the international news section of the daily newspaper 24 heures in Lausanne. Also a writer, À la frontière de notre amour, published on the 2nd of September 2020 by Éditions Favre, is her fourth novel.
Read more articles about CULTURE