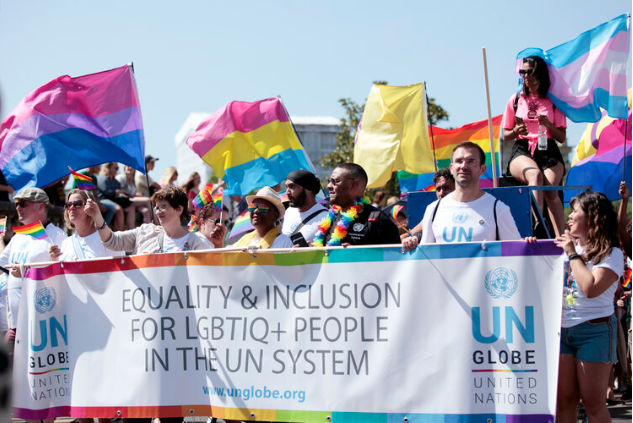 As the UN system looks to reform and make efforts for a more inclusive and diverse work force, what will this mean for the most unrepresented members of society in particular gender diverse persons?

The buzz words these days in the UN HR corridors is the future of work for the United Nations workforce. The global context within which the United Nations system operates is changing considerably, mainly driven by many emerging challenges and issues, including that of gender diversity. Yet as the UN system looks to reform and make efforts for a more inclusive and diverse work force, what will this mean for the most unrepresented members of society, in particular gender diverse persons? This issue is one such challenge that it must be fully prepared to take on, to ensure a diverse work force. The UN system, however, in the way it approaches human resources, legal affairs, and security matters, among others, continues to focus exclusively on the existence of a gender binary of men and women only.

Around the world, however, there is increasing awareness about gender diversity, and an increasing number of people who identify beyond the binary of male and female. From the fa’afafine in Samoa, the waria in Indonesia, the hijra in India, Muxe in Mexico, to the two Spirit from the United States and Canada, shows us that gender identities other than male and female have always existed throughout history. And recent data shows that more and more youth identify other than male or female. If the work force of the UN is to truly reflect “we the people of United Nations…”, it must adopt a holistic and non-binary approach to gender.

Gender diverse individuals face violent backlash for not conforming to gendered expectations of “proper” gender expression, behaviour, and presentation. They are also often the target of discrimination. Within the UN System, trans, non-binary and gender diverse identified staff have experienced being victims of harassment, or have faced an Organization that does not know how to account for their gender identity, or desires to change their gender identity and undergo transition. Yet trans, and gender diverse people have often told UN-GLOBE that the very reason why they wanted to join the UN in the first place was because they believed it would be the one place where their gender identity wouldn’t stand in the way towards that which all of us want: an opportunity towards career success.  This is why it is imperative that the UN, as an employer, stands for the very basic human rights principle of equality: the principle that one’s background, race, HIV status, nationality, religion, social origin, race, national extraction, culture, and sexual and gender identity should not be an impediment to career success.

The initial steps towards gender diversity

One of the main challenges for trans and non-confirming people is access. Rigid heteronormative and colonial laws in many countries make it impossible or difficult for trans persons to change their national identity papers to align with their gender identity. And without national identity papers aligning to their gender identity, they are unable to access the very institutions that were established to protect the most vulnerable members of society and lift them out of poverty. This includes the UN. Trans and non-binary persons frequently inform UN GLOBE of the issues they have accessing UN Offices around the world, including Offices based in countries with more progressive gender identity laws in place. From being outed to dead named, trans and gender non-conforming persons are subjected to transphobic policies before even entering UN buildings. The same issues also present themselves online, when gender diverse persons apply for vacancies in the UN and faced with application forms that recognises only two genders, restricting trans and non-binary persons from even applying. Extending gender categories beyond male and female is the key to establishing within the UN greater awareness and respect for people of diverse gender identities and expressions.

Training of staff is crucial to ensure a UN system that is more aware and inclusive of people of diverse sexual and gender identities. Trainings should particularly target human resources, legal, and security officers, as well as all those staff members who are the first point of contact with UN beneficiaries and visitors, such as officers who register migrants for IOM, for example, or those staffing information booths. Managers should also be targeted. Trainings should have a mandatory online component that is complemented with in-person training for staff with specialized functions and in the categories mentioned above.

Organizations of the UN system are generally responding positively, and sympathetically, but there is a need for a UN system-wide common approach that can ensure the UN system is prepared to tackle a changing landscape when it comes to gender. In order to capacitate the UN system to meet the needs of trans-identified individuals, and under the overarching goal of a more diverse, more inclusive UN system, UN-GLOBE developed UN-GLOBE Recommendations for an inclusive workplace for trans and gender non-conforming staff members, dependents, and other stakeholders of the UN System. The Recommendations are a result of the work done by a task force comprised of staff with backgrounds in legal affairs, political affairs, human resources, and communications, and with trans-identified voices in the lead. These recommendations are intentionally comprehensive to ensure all needs of trans, non-binary and gender diverse-identified individuals are met. They cover everything from gender-neutral restroom facilities, to gender-neutral language, to security, to expanded choices when it comes to gender markers in employment forms.

These recommendations are a perfect fit with the UN System-Wide Strategy on Gender Parity. The Strategy cannot succeed without a change in culture— from binary gender to one of gender diversity that is inclusive of trans-identified individuals, gender non-conforming individuals, those who don’t identify with a gender, and others. A conversation on the damaging effects of gendered expectations of “proper” gender expression, behaviour, and presentation is also needed. UN GLOBE is working actively to advocate that these recommendations become roadmap towards a more diverse, more inclusive, and stronger UN system.

UN-GLOBE stands ready to help the Organizations of the UN System implement policies that can help ensure inclusiveness for the increasing number of staff who identify as trans and gender non-conforming.UN-GLOBE