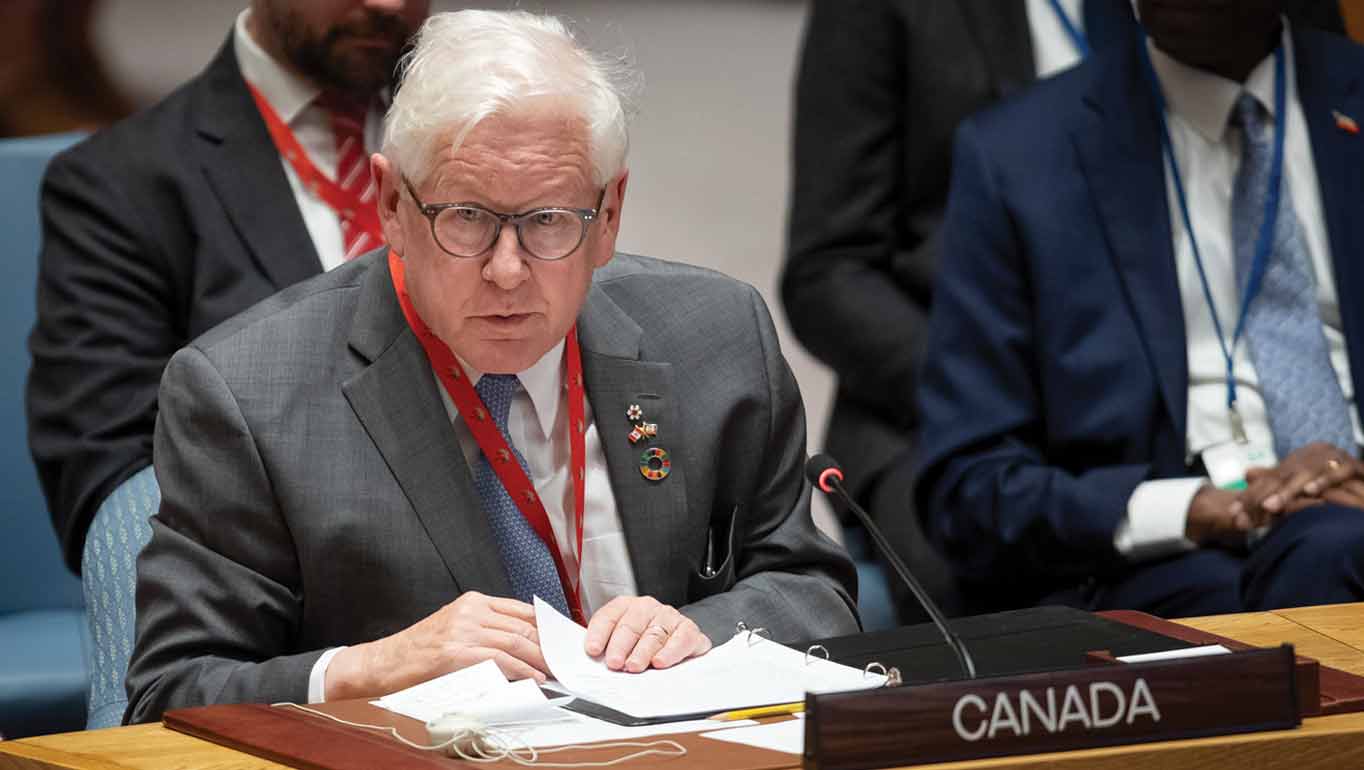 Diplomacy in the family
Ambassador Robert Rae, Permanent Mission of Canada to the United Nations
By Julián Ginzo*
1 Nov 2022

Please tell us briefly about your career, why you joined the diplomatic service, and how you were appointed to your current position as Permanent Representative of Canada to the UN?

My father, Saul Rae, was a career diplomat, and served, among others, as Canada’s Ambassador to the United Nations in both New York and Geneva. He would both bring work home and took us to work with him, so I got to understand the business of diplomacy quite early. I took a different path and went into politics, but this way of thinking globally, historically, and to be curious about other peoples, cultures, and languages, stayed with me. It was an honor to be appointed as Permanent Representative and to promote Canada’s role in the world.

I have had a long and varied career, with many highs and also lows. Prior to my appointment as Permanent Representative, I was Canada’s Special Envoy to Myanmar and saw, first-hand, the humanitarian crisis affecting the Rohingya. As Permanent Representative of Canada to the UN, I have had the honor of chairing the ECOSOC Ad Hoc Advisory Group on Haiti. And of course, there is the ongoing Russian war of aggression against Ukraine. These crises are difficult and terrible, and the work we do at the United Nations day in day out to find consensus for concerted action to address these issues is important, and it is dear to my heart.

Your country is recognized for the right of indigenous peoples to self-determination, including the right to freely pursue their economic, political, social and cultural development. How has integration evolved over the last decade?

Canada is built on the ancestral lands of First Nations, Inuit and Métis peoples. It is a country that has historically denied Indigenous peoples their rights through assimilationist policies and practices, including the residential school system.

During my career as a lawyer, a teacher, and a politician, I spent much time dealing with this question: how do we address the damage that past policies have inflicted on Indigenous people? Canada’s constitutional amendments recognize treaty and aboriginal rights, and as Premier of Ontario I led further discussions. I later worked as a negotiator and mediator on land claims and resource issues. Canada’s journey continues and I am proud to be part of it.

Reconciliation is about working together to achieve a fundamental shift in the way we perceive and interact with each other for the benefit of everyone in Canada. Walking the shared path of reconciliation with Indigenous peoples in Canada is not only about righting the wrongs of the past. It also requires listening to, learning from, and working together with Indigenous peoples to build a better future.

Canada is known to be a strong defender of the rights of LGTBQ2I persons. How do you promote this agenda internationally?

Canada actively promotes LGBTQ2I rights in a number of multilateral fora, including the United Nations Human Rights Council (HRC), the UN General Assembly Third Committee, the UN Commission on the Status of Women (CSW), and at meetings of the Organization for Security Cooperation in Europe (OSCE) and the Organization of American States (OAS). At the bilateral level, Canada seeks to advance LGBTQ2I rights by raising LGBTQ2I issues during bilateral human rights consultations, and by working with like-minded partners to encourage an interlocutor country to effect positive change.

While recognizing that countries are at different stages, Canada calls on all states to eliminate laws and policies that discriminate against persons based on their sexual orientation, gender identity or expression, or sex characteristics, and to combat all acts of violence targeted towards LGBTQ2I persons. Canada encourages all states to support the work of local LGBTQ2I organizations to further promote the welfare of LGBTQ2I communities.

How do you view the impartiality that all UN staff members have to uphold while exercising their functions?

Canada is confident that the majority of UN staff perform their functions as international civil servants in conformity with the staff rules and regulations. For our part, we are confident that Canadians serving in the UN are recruited on the basis of merit and we do not seek to influence them in the discharge of their responsibilities. We are aware that nationals of other member states, working within the UN, are sometimes subject to inappropriate pressures from their national governments. The efficiency and effectiveness of the UN depends on its staff being able to work without undue pressure from external authorities and we expect allegations of political bias in their work to be investigated and duly addressed.