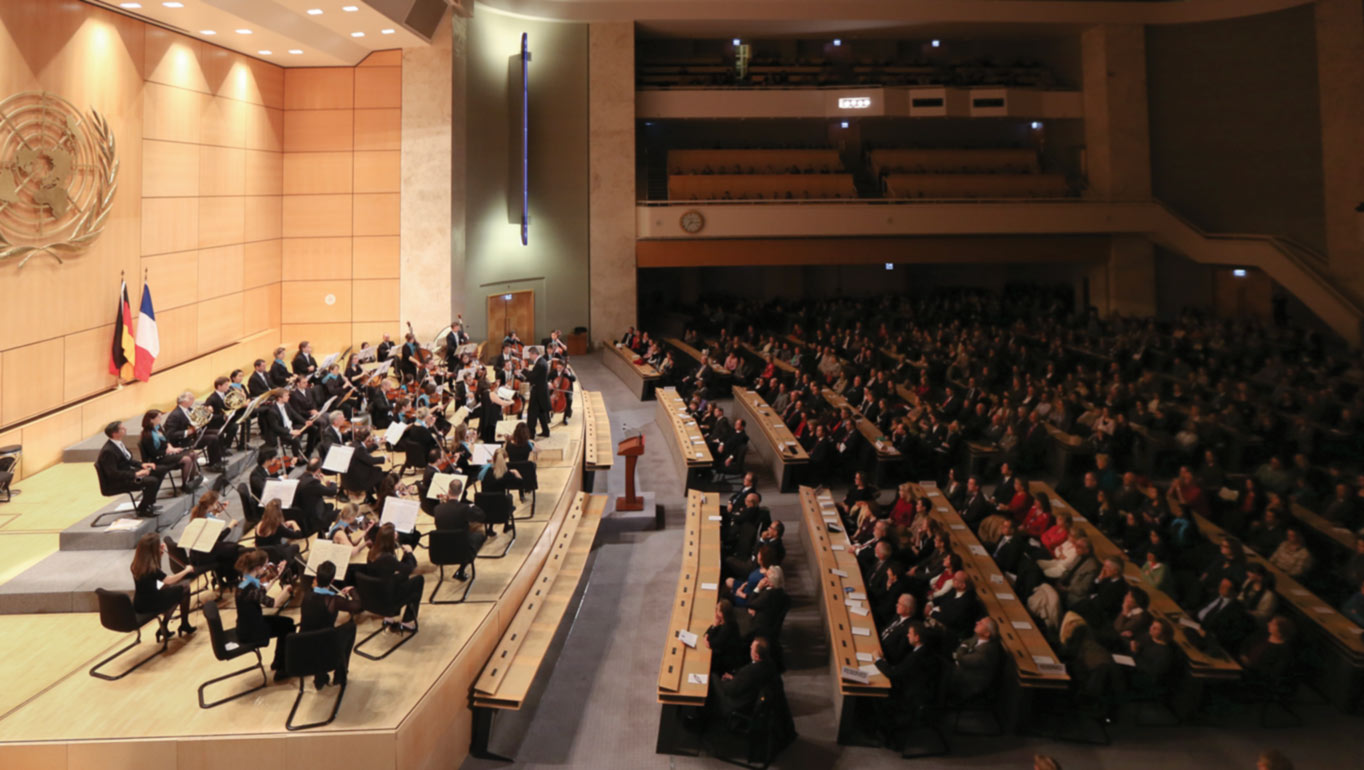 It was Beethoven’s 5th Symphony; I remember the opening chords… Solemn, stern, powerful, the notes filled the hall with a vibrancy unusual for the setting. It was not the score that surprised me; it was the harmony that emerged as the music filled a space that started breathing. This was no traditional concert hall. It was the Assembly Hall at the Palais de Nations in Geneva. On stage, the United Nations Orchestra, today rebranded as L’Orchestre des Nations, performed a concert entitled Music for Peace.

I had sat in that landmark hall on prior occasions, listening to talks on war and peace, conflicting voices on opposing ideological and geopolitical sides. And now, in this place, used for hard talk, the notes for Peace started speaking in one harmonious, unifying voice. Beyond borders, language and stance, the universal language of music was taking hold of the shared humanity of an audience sitting in silent awe.

It was 2011, the orchestra’s first season. By then, I had been living in Geneva for some twenty years, having left UNICEF and the field to take up a new position and challenging new functions at the World Intellectual Property Organization (WIPO) headquarters. Of my early UNICEF days in the Regional Office for Latin America and the Caribbean in Bogotá, Colombia, in the mid 1980s, I remember my passion as a Junior Professional Officer acquainting myself with the economic theory of “Adjustment with a Human Face” and the practice of advocacy and social mobilization. As Information Officer, I used my journalist skills to leverage the power of the media to convey messages that could save and improve children’s lives – through immunization, safe drinking water and sanitation, mother and childcare, appropriate nutrition, and basic education.

From the Andean heights, in 1990 UNICEF brought me to the Regional Office for India in New Delhi, to advocate for children’s rights in the Indian sub-continent. The Convention on the Rights of the Child, ratified that year, called on governments to “take all appropriate legislative, administrative, social and educational measures to protect the child from all forms of physical or mental violence.”

The UNICEF Communications team, of which I was part, spared no effort to bring children’s issues to the attention of the media, putting “children first” as legitimate holders of connected and inalienable rights. We spread that message through the spoken and written word, in schools and universities, community and health centers, in rural India, as well as in urban contexts in the face of unimaginable challenges to overcome deeply rooted forms of social, economic, educational, and cultural exclusion. Children, above all girl children, were the invisible, voiceless citizens, whose plight we were tasked to make known. Using radio, television, and the print media creatively, we made UNICEF a credible partner with a broad range of government, private sector, and civil society stakeholders.

In the late 1990s, I was already in Geneva having redirected my professional path to WIPO, where I was proud to take the helm of the WIPO Distance Learning Program at the WIPO Academy. The Academy had been established as the organization’s teaching and training arm, and with the Internet taking over as the ubiquitous means of communication, we were exploring new approaches to develop online courses on intellectual property (IP). Our program has since developed over 20 online courses in ten languages, trained over 90,000 students worldwide, and increased access to online courses for the blind, visually impaired, or otherwise print disabled. This is the story of shared success, and I am grateful to my colleagues in those early days and to those who have ably continued to expand the program’s outreach.

In the last two decades, I experienced different facets of WIPO’s development cooperation, working with governments, the private sector and academia in over 40 countries to demonstrate how IP can help realize the potential of the SDGs.

Throughout my professional journey, I never forgot the early lessons of how to apply economic theory “with a human face.” So, it was with the human dimension in mind that I strived to bring IP within reach of first-line creators and innovators, often at the grassroots level, in schools, universities, communities and SMEs.

Without music life could lack vibrancy

When preparing for retirement, I asked myself not “what can I do next?”, but rather “how can I serve now?” Music, in all its might, provided my anchor and my answer. I embraced the mission of L’Orchestre des Nations to bring extraordinary music within reach of ever-wider audiences. Whether playing for peace or conveying other SDG-resonant themes, the orchestra offers not only the delight of musical excellence – it creates bridges across cultures and mindsets. I am currently the President of the Association of the Friends of l’Orchestre des Nations. If you love the universal language of music, come join us, become a Friend!

* Francesca Toso is Former UNICEF and WIPO official, Member of Greycells. President of the Association of the Friends of L’Orchestre des Nations.
Read more articles about UN MEMORIES